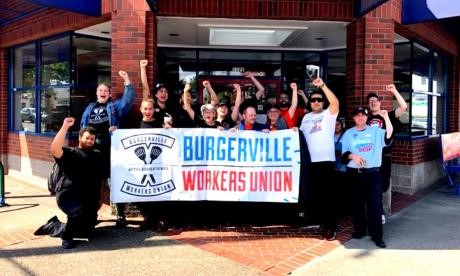 (PORTLAND, OREGON) - Members of the Burgerville Workers Union recently launched a Strike as negotiations with the fast-food chain broke down, following a year of stalling and refusal on the part of management to address Worker demands.

The Burgerville Workers Union has grown to represent Workers employed at several of the company’s locations - which have been officially recognized as Union Shops, bolstered by a strong base of support within the wider community and Labor Movement.

The Union has also called several strikes and pulled off multiple job actions and pickets since they first launched.

As BWU wrote: Burgerville is not bargaining in good faith.  After stalling for months on negotiating over wages, they cancelled our bargaining session because Workers were prepared to Strike if they brought nothing to the table again.  After months since their last bargaining session, we finally agreed to meet. However, their lawyers e-mailed us and said they were canceling the session because we had planned a Strike and demanded we postpone bargaining until there is no threat of a Strike.  They accompanied their e-mail with a strange e-mail from CEO Jill Taylor to all Workers trying to justify canceling the bargaining session by claiming: “Burgerville is changing the way we do business.”  Don’t get it twisted, the company is refusing to negotiate based on our legally protected right to Strike at any time.  Around 12 p.m. on Friday 9th August, the Burgerville Workers Union officially announced that it was on Strike, stating that Workers from three different stores had walked off the job: We are ON STRIKE!  This morning, Workers from across three different Burgervilles walked off the job, because none of us can afford to wait any longer for a raise.  If a Strike is what it takes to get Burgerville to bargain with us in good faith and bring us a serious proposal on wages, we’re here to prove with our actions that we’re ready.  Earlier this week, Burgerville decided last-minute to push back a scheduled bargaining session, because they heard we might be going on Strike that day.  That was supposed to be the bargaining session where they brought us a better proposal on wages than the 13-cent raise they offered us nearly six months ago, but Workers can’t afford these repeated delays in bargaining.  With what we’re currently getting paid, Workers often have to choose between making rent, buying groceries, or paying other bills and sometimes face eviction as a result.  On Wednesday, we took legal action and filed an Unfair Labor Practice (ULP) Charge against Burgerville for bargaining in bad faith.  Now we’re taking direct action to back that up.

To Read This Labor News Story In Its Entirety, Go To: https://libcom.org/news/burgerville-workers-union-launches-strike-negotiations-break-down-10082019