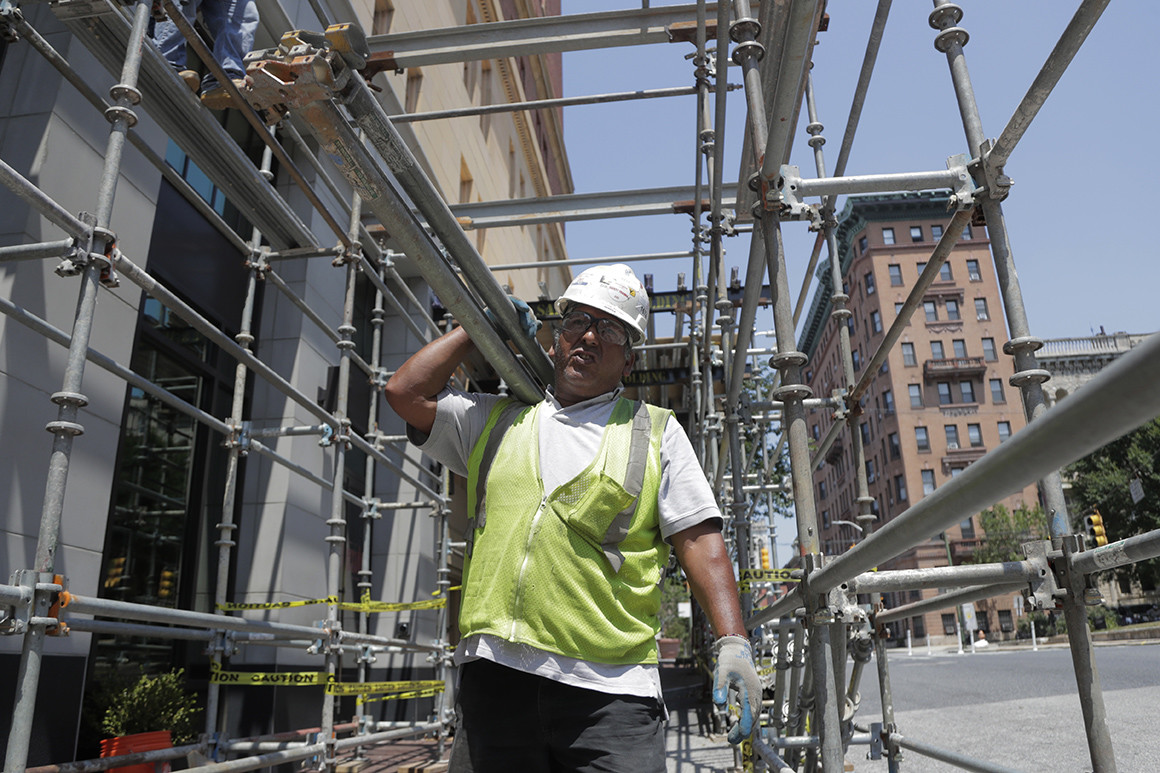 One of the Nation’s largest Labor Groups embraced Republican Donald Trump at the start of his Presidency, in hopes he would create construction jobs and retreat from proposals that might reduce Workers’ wages, but now the two sides are on the brink of war, endangering a key bloc of Trump’s support in Midwestern Swing States in 2020.

At issue is a deal gone bad between Trump and North America’s Building Trades Unions (NABTU) over a Labor Department Apprenticeship Initiative, the politics of which have grown more complicated since last month’s ouster of Secretary Alexander Acosta.

Leaders of the Union Federation worry that the final version will undermine their Own Job Training Programs and create a supply of cheap labor for developers, undercutting highly-skilled Construction Workers who rely on Prevailing Wage Jobs to make ends meet.

“It’s an ‘existential threat’ to the Building Trades,” said a former administration official with knowledge of the discussions - and it has the powerful group, a Union Federation that represents millions of Construction Workers across the U.S., seeing early signs of a Member-driven revolt against Trump in 2020.

Such a turn could further weaken Trump’s already-declining support in the Midwestern states that won him the presidency in 2016, when many Building Trades Members embraced his pledge to create Working Class Jobs and improve the Nation’s infrastructure.

“The Building Trades ‘have the potential to be a significant force’ in the 2020 election,” said Steve Rosenthal, a Strategist and former Political Director for the AFL-CIO, “particularly in some of the ‘key’ Swing States like Michigan, Wisconsin, Pennsylvania and Iowa.  The Building Trades ‘know how to mobilize’ their Members ‘and move votes.’  ‘And their opposition to Trump can have a ripple effect beyond their Members and their families to other voters in the communities where their members live and work.’”

Trump sought to shore up support with the Building Trades this past week at an appearance in Pennsylvania.  An instruction sheet given to Workers attending the event said Trump hoped to “promote good will from the Labor Unions,” and he wasted no time doing so.  “I love the Unions and I love the Workers.  And, you know, when I built buildings in New York, I built them exclusively with Unions.  People don't understand that.  I was exclusive.”

Until recently, it was virtually impossible for anyone to build anything in New York City without Union Labor.

Though its leadership endorsed Hillary Clinton in the 2016 campaign, NABTU has always been viewed as more conservative than other Labor Groups and since Trump's victory it has weathered criticism from the Left for that reason.

Trump - who won the majority of White Male Union Members - made a point of meeting with the leaders of several Construction Unions on his third day in office, after which NABTU President Sean McGarvey exalted their “common bond with the President.”

To Continue Reading This Labor News Report, Go To: www.politico.com/story/2019/08/16/trump-jobs-construction-workers-1653450?fbclid=IwAR0UfrTRAUxmEEq8QxjFZ3ZDKI3cdSKFMwGgrsk2NZDZrWjkhh4a4SezuS8