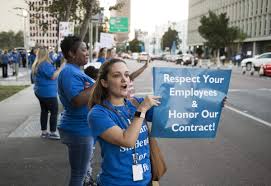 Judge Angela Dempsey issued an eight-page decision siding with the state’s arguments on the constitutionality of the law, which can require Teacher Unions to be recertified to represent Employees.  Such recertification is required if fewer than 50% of the Employees eligible for representation are Dues Paying Members.

The Florida Education Association (FEA), Unions in several counties and individual Teachers filed the lawsuit in July 2018 challenging the constitutionality of the law.

In part, they argued that the new requirement violated Collective Bargaining Rights and Equal Protection Rights as the requirements did not apply to other Public Sector Unions.

But Dempsey wrote that the law did not violate Collective Bargaining Rights and pointed to the State’s Teacher shortage as a reason for treating Teachers different than other Employees.

She wrote the State “recognizes the need for further accommodations when it comes to Public School Teachers.”

“Here, the goal of the statute is to afford Public School Teachers greater control over the collective bargaining where the Union Dues Paying Members of a Bargaining Unit comprise less than fifty-percent of the Teachers,” Dempsey wrote. “The means for reaching that goal is the requirement that the Union Representatives must furnish the requisite data per the statute’s provisions.  The provisions themselves do not oust the Union from its representative position, but instead trigger the opportunity for the Employees to reconsider whether to alter the status of their representation.”

The Union Recertification Issue was included in a massive Education Law (HB 7055) that the Republican-dominated Legislature passed in 2018.

The lawsuit filed by the Unions also addressed other constitutional issues, including whether the legislation violated a requirement that laws address single subjects.

Dempsey’s ruling addressed only the collective bargaining and equal protection arguments and dealt with a motion by the Unions and Teachers for summary judgment on those issues.

In the motion, attorneys for the Unions and Teachers wrote that the recertification requirement in the law “imposes numerous burdens upon Instructional Employees, but no other category of Public Employees.”

If required to go through the recertification process, a Union would be required by the law to get statements of support from 30% of the Bargaining Unit and then hold an election.

“If it fails to earn a favorable vote of fifty-percent of the voting Employees, it faces decertification,” the motion for summary judgment said. “This will leave the Employees of the unit with no Collective Bargaining Representative.  Even if the organization is not decertified, the Employees in the Bargaining Unit are burdened by their chosen representative having to redirect its resources from collective bargaining activities in order to ensure it meets a certain Membership level every year.  These are significant burdens upon plaintiffs’ right to effective collective bargaining.”

To Continue Reading This Labor News Report, Go To: www.tampabay.com/news/gradebook/2019/08/12/teacher-unions-suffer-setback-as-judge-sides-with-state-on-membership-law/?fbclid=IwAR0ec-HfppVo2ZliQw0hAZKPmTiXfEq3jUzXxCNKQ7BLRjX3j-AM0V6I870