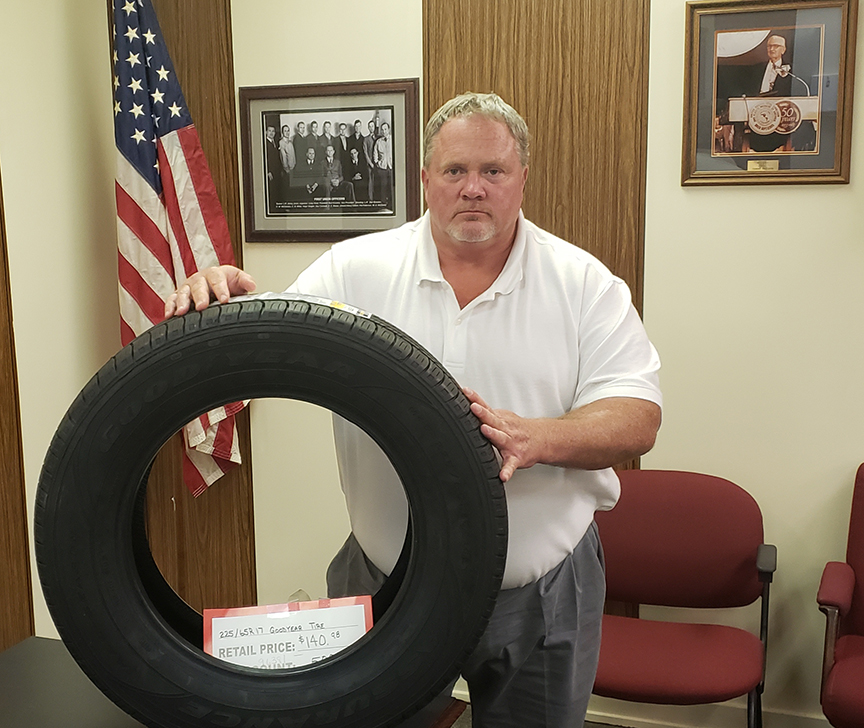 Made in Mexico and imported to Gadsden, that tire induces fear.

Those were developed at Goodyear’s Gadsden factory in 2014.

Now some, or possibly all, are built in a brand-new, half-billion-dollar plant in San Luis Potosí, Mexico - and Goodyear is furloughing Workers at its tire plant in Gadsden, where Williams is President of the USW Local Union.

This sad story is as old as NAFTA (The North American Free Trade Agreement).

That’s a quarter century of pain.

An American corporation, GM or Nabisco or Carrier, builds a factory in Mexico.

There, NAFTA will protect the company from tariffs when it imports the Mexican-made cars or Oreos or furnaces back into the United States.

And in Mexico, the company can pollute freely, pay Workers as little as $2 an hour and establish company-controlled Unions so Workers can’t bargain for more.

It’s a lose-lose for Workers.

Goodyear hasn’t closed the Gadsden factory, but the Mexican tire in Williams’ conference room at the Local Union Hall is a symbol of Gadsden Workers’ dread that it will.

As the new plant in Mexico geared up, Goodyear laid off 175 Workers in Gadsden and 60 at its plant in Danville, Virginia this year.

It sent its Mexican Workers a clear message by firing 57 of the participants.

This is why the United Steelworkers (USW), and the rest of Organized Labor, opposes the proposed new NAFTA.

It contains some new language regarding Workers’ Rights and Environmental Protection, but it lacks meaningful enforcement provisions.

Without them, corporations like Goodyear will continue to invest in Mexico while closing American factories.

And, Workers in both countries will continue to get hurt.

To Continue Reading This Labor News Report, Go To: https://usw.org/blog/2019/a-tire-that-inspires-fear?fbclid=IwAR3JuqGNLbSuHaX3zTCmfI4TBYM2506rJMEMxvxotwE7L--Fd13Lx-k4k7E#.XVQjt1QADvw.facebook