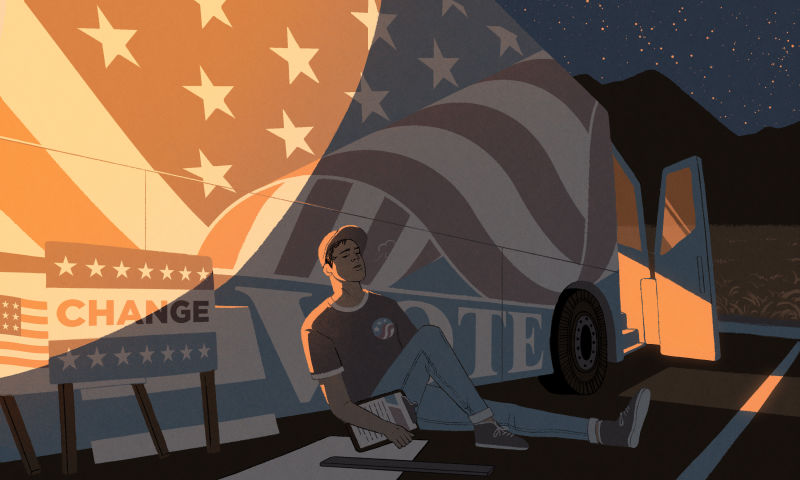 When “Miguel” came to America a few years ago, Donald Trump’s racist campaign against Immigrants was just catching fire.

“It affected me,” Miguel, an Undocumented Immigrant who asked that we not use his real name, told Splinter.

“It affected everyone,” he said.

He tried to turn his focus elsewhere, like school.

“The students were Immigrants,” he said, “and I was surrounded by a lot of people ‘who were afraid of what was happening.’  ‘No one had a voice.’”

So Miguel decided that living in fear was wrong.

He then went to work in politics.

“Even ‘if I don’t have a vote, I can make other people vote,’” he told Splinter.

Miguel’s decision was a brave one for obvious reasons - putting oneself in the public eye for any reason as an Undocumented Worker brings risks.

He worked for progressive candidates, door-knocking for politicians who stood up for people like him in big speeches.

He didn’t expect that within a few years, on an insurgent statewide campaign - Miguel didn’t want to reveal the name publicly for fear of retribution - his boss would be trying to convince him that the cause was so good he should work for free.

Miguel’s story is not unique.

The often-shoddy working conditions of Democratic campaigns are an open secret to anyone involved.

On the generous side, it could be argued that poor working conditions stem from passion - everyone involved feels very strongly about the causes, from the rights of Undocumented People to health care.

On the more cynical side, Campaign Workers get the same sort of mistreatment that overworked and underpaid Employees get across the country.

It’s also the kind of thing that Unions were made for.

Historically, though, Workers on political campaigns have had no Union Representation.

But now that is starting to change.

In May, Bernie Sanders’ 2020 campaign announced that “a majority of eligible Staff” had decided to join the United Food and Commercial Workers (UFCW) Local 400, making his Staff the first Presidential Campaign in American History to Unionize.

Julián Castro’s Staffers also announced that they Unionized with the Campaign Workers Guild (CWG), a Union formed in 2018 to organize Campaign Staffers.

And Elizabeth Warren’s campaign has Unionized with the International Brotherhood of Electrical Workers (IBEW).

And there has been a steady trickle of Congressional and local campaigns Unionizing as well.

Soon, it’s possible that not only will a Democrat’s campaign buttons and yard signs have to be connected to a Union, but their Workers will too.

To Continue Reading This Labor News Story, Go To: https://splinternews.com/americas-overworked-and-underpaid-campaign-staffers-are-1834706500