Fed Up With Working Under An Expired National Contract, SEIU-Represented Kaiser Permanente Workers In California Vote To Approve Strike - Which Could Draw In More Than 80,000 Employees Of The Health Care Giant Across The Nation 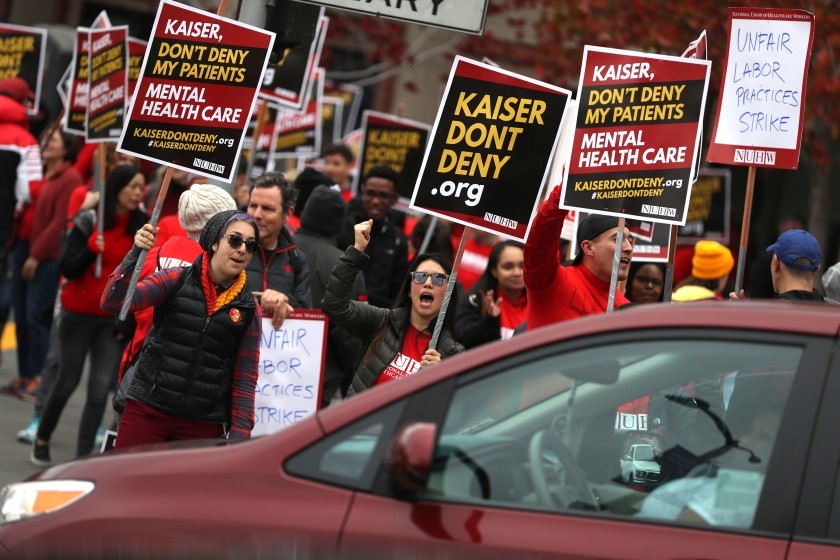 (LOS ANGELES, CALIFORNIA) - A swath of Kaiser Permanente Workers in California has voted overwhelmingly to approve a Strike that could draw in more than 80,000 Employees of the Health Care Giant across the Nation, according to the coalition of Unions representing them.

The Employees - who include most Staff aside from Doctors, Mental Health Workers or certain Nurses - have been working under an expired National Contract since September, though their Local Contracts are still current.

The Service Employees International Union (SEIU) United Healthcare Workers West - which is the largest Union in a coalition covered by the National Contract - voted in support of the Strike, according to the Coalition of Kaiser Permanente Unions.

Two-thirds of the Union’s Members voted and 98% of those voted yes, it said.

The vote does not mean a Strike will take place - rather, it gives Union Leaders the ability to call one whenever they want, which provides extra leverage in negotiations.

Leaders have floated early October as a possible time for a Strike.

Workers in other Unions represented by the coalition, including those in five other states and Washington, D.C., as well as four in California, are scheduled to vote in the coming weeks.

The coalition says the Non-Profit Health Care Giant’s focus on high margins in recent years has led to Unfair Labor Practices (ULPs) and refusals to bargain in good faith.

“Workers ‘are rejecting what Kaiser has become,’” said Sean Wherley, a spokesperson for the Union Coalition. “It has ‘moved away from its commitments to patients and staffing and is instead emphasizing huge profits and executive salaries.’”

Oakland-based Kaiser is one of the Nation’s largest not-for-profit health plans.  It has 12.3 million members, including 4.6 million in Southern California.

The Health Maintenance Organization, or HMO, generated nearly $80 billion of revenue and $2.5 billion of net income last year, according to its annual report.

To Continue Reading This Labor News Story, Go To: www.latimes.com/business/story/2019-08-12/kaiser-permanente-california-workers-approve-strike