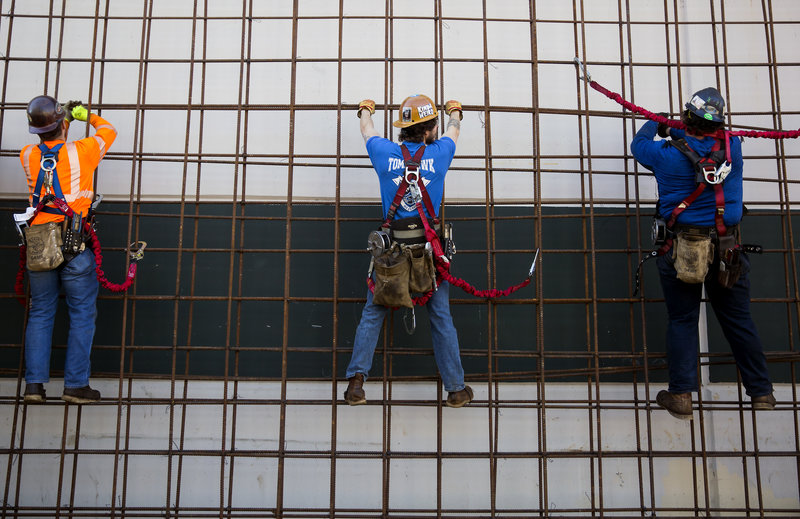 (SEATTLE, WASHINGTON) - Like most other American high school students, Garret Morgan had it drummed into him constantly: Go to college. Get a bachelor's degree.

"All through my life it was, 'if you don't go to college you're going to end up on the streets,' " Morgan said. "Everybody's ‘so gung-ho’ about going to college."

So he tried it for a while, then he quit and started training as an Ironworker, which is what he is doing on a weekday morning in a non-descript high-ceilinged building with a concrete floor in an industrial park near the Seattle-Tacoma International Airport.

Morgan and several other men and women are dressed in work boots, hard hats and Carhartt's, clipped to safety harnesses with heavy wrenches hanging from their belts.

They're being timed as they wrestle 600-pound I-beams into place.

Seattle is a forest of construction cranes and employers are clamoring for skilled Ironworkers.

Morgan, who is 20, is already working on a job site when he isn't at the Pacific Northwest Ironworkers shop.

He gets benefits, including a pension, from employers at the job sites where he is training.

Some 30 million jobs in the United States that pay an average of $55,000 per year don't require bachelor's degrees.

As for his friends from high school, "they're still in college," he said with a wry grin. "Someday ‘maybe they'll make as much as me.’"

While a shortage of Workers is pushing wages higher in the Skilled Trades, the financial return from a bachelor's degree is softening, even as the price - and the average debt into which it plunges students - keeps going up.

But high school graduates have been so effectively encouraged to get a bachelor's that high-paid jobs requiring shorter and less expensive training are going unfilled.

This affects those students and also poses a real threat to the economy.

"Parents ‘want success’ for their kids," said Mike Clifton, who teaches machining at the Lake Washington Institute of Technology, about 20 miles from Seattle. "They ‘get stuck’ on (four-year bachelor's degrees) and ‘they're not seeing the shortage there is in Tradespeople until they hire a Plumber and have to write a check.’"

In a new report, the Washington State Auditor found that good jobs in the Skilled Trades are going begging because students are being almost universally steered to bachelor's degrees.

Among other things, the Washington auditor recommended that career guidance - including choices that require less than four years in college - start as early as the seventh grade.

"There is an ‘emphasis’ on the four-year university track" in high schools, said Chris Cortines, who co-authored the report.

Yet, nationwide, three out of 10 high school grads who go to four-year public universities haven't earned degrees within six years, according to the National Student Clearinghouse.

At four-year private colleges, that number is more than 1 in 5.

To Continue Reading This Labor News Story, Go To: www.npr.org/sections/ed/2018/04/25/605092520/high-paying-trade-jobs-sit-empty-while-high-school-grads-line-up-for-university?fbclid=IwAR1FebivTFBeDZg__OKfDxsVhGwVEq_lulTgqyXT2HS8qCBXlczwVnUbS4c