He Gave More Than He Got - Organized Labor Saddened By The Passing Of Former & Long-Time IBEW Local 237 Labor Leader Russ Quarantello, Whos Being Described As A Pillar Of The Niagara County Labor Movement 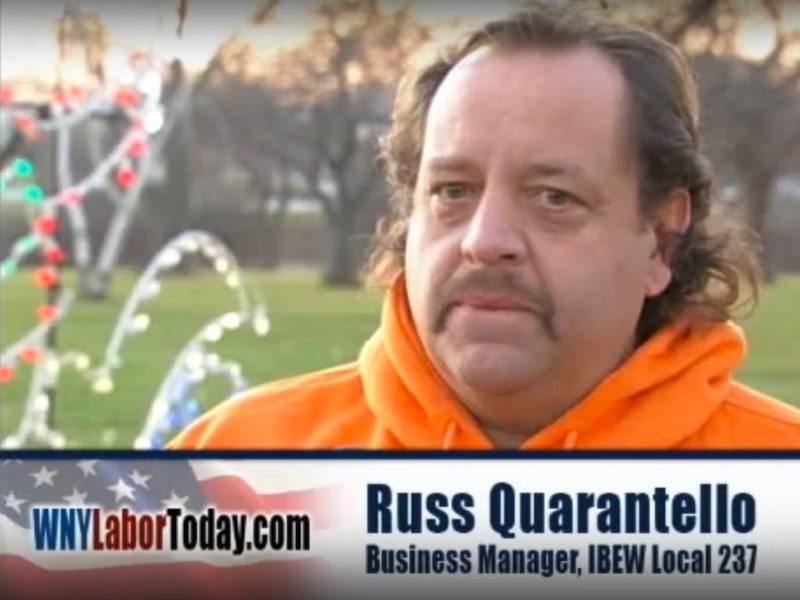 WNYLaborToday.com Editor’s Note: WNYLaborToday.com is sad to report that Russ Quarantello (Pictured above/WNYLaborToday.com Photos) - a Member of IBEW (International Brotherhood of Electrical Workers) Local 237 in Niagara Falls from the early 80s to 2019 and who served in a number of Union positions, including as its Business Manager for 12 years, unexpectedly passed away over the weekend.  "From door bells to high voltage, our Members are involved in everything," a proud Quarantello once told WNYLaborToday.com of his Niagara Falls-headquartered IBEW Local that represents 230 Members who work across both Niagara and Orleans Counties.  Under Quarantello’s leadership, Local 237’s Membership made the decision to involve themselves in the communities where they worked, lived and raised their families.  For example, as many as 70 IBEW Local 237 Members yearly volunteered their time to help set up and wire the Holiday Lights Display in Niagara Falls' Hyde Park.  WNYLaborToday.com has dug deep in our Labor Video Archive to post two individual videos on our Front Page that feature Quarantello and his Membership at Local 237 and we hope you take the time to view them.  Quarantello’s wake is scheduled to be held on Wednesday and Thursday at the M.J. Colucci & Son Funeral Home in Niagara Falls.  A funeral mass will take place at St. Peter’s Roman Catholic Church in Lewiston at 9:30 a.m. on Friday.

(NIAGARA FALLS, NEW YORK) – I’m sorry I did not have one last chance to talk with Russ Quarantello, the former International Brotherhood of Electrical Workers (IBEW) Local 237 Business Manager who suddenly and unexpectedly passed away over the weekend at the age of 59.  But I know that many, like I, across the entire Western New York Labor Movement believe the light Quarantello helped shine on the Niagara County Labor Movement - much like his Union and its Membership volunteering their time to help set up and wire the annual Holiday Lights Display in Niagara Falls’ Hyde Park, will never be extinguished.

Looking back at it all now, it was so appropriate that Quarantello received the United Way of Greater Niagara’s Shining Star Award in 2018 for donating his time to the United Way on numerous occasions.  He had personally participated in so many door-to-door Labor walks and parades over the years, and served on the Board for Big Brothers and Sisters, the Youth Mentoring Board, the Niagara-Orleans AFL-CIO Central Labor Council Board, the Niagara Falls Bridge Commission and the United Way of Greater Niagara, to name but a few. 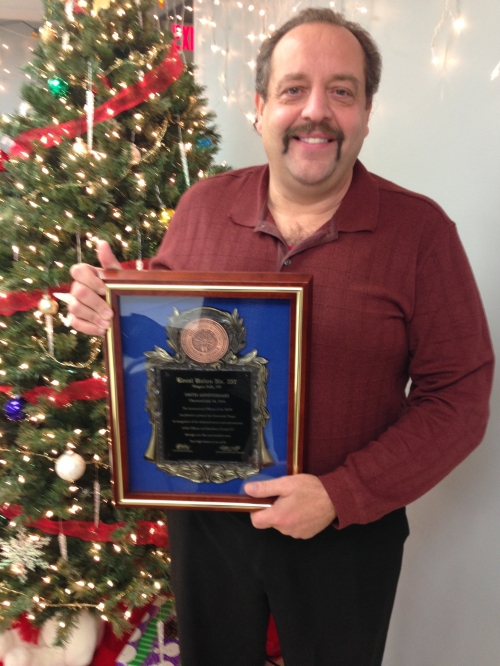 Quarantello also spoke to WNYLaborToday.com after the event, telling Your On-Line Labor Newspaper: “This award ‘was really for’ IBEW Local 237, ‘our Members and our Union Contractors’ - NECA (National Electrical Contractors Association) and Ferguson Electric.  The ‘bottom line is without all of them, it wouldn’t get done.’  We have a ‘great bunch’ of Members ‘who step up all the time and will do anything for the communities they live in.’”

But that was only the tip of the iceberg for Quarantello, a soft-spoken, down-to-earth Labor Leader whose passion was to make the lives of his IBEW Local’s Members better, as well as the lives of the Members of his fellow Niagara County Building Trades Unions’ better, and the lives of those Workers who were represented by a number of other Niagara County Unions.

I remember one of my first encounters with Russ on a picket line up in Niagara Falls a decade or so ago (Pictured Below/WNYLaborToday.com File Photo).  His passion and dedication for standing up against companies who brought in out-of-town Workers instead of hiring local Workers got his blood boiling, as it did in May of this year when Local 237 Members picketed a ground-breaking event for the Bank of Buffalo’s new Niagara Falls branch.

At that time, Quarantello told WNYLaborToday.com that he was “tired” of businesses coming into Niagara Falls and Niagara County and making the decision not to use Union Labor.

“They ‘want our money and our jobs,’” he told WNYLaborToday.com.

Quarantello also told me he was also tired of being given the excuse by the owners of those businesses that “it wasn’t ‘their’ decision” to hire a project manager/contractor that declined to use Union Labor on their projects.

“The ‘more people we can make aware of how Bank on Buffalo’s views and treats us, the better.’  ‘We live here.’  ‘We pay our taxes here and no job is too small.’  ‘We fight tooth and nail for everything.’  ‘I guess what they’re saying to us is we are good enough to do business with, but not to hire us,’” Quarantello told Your On-Line Labor Newspaper. 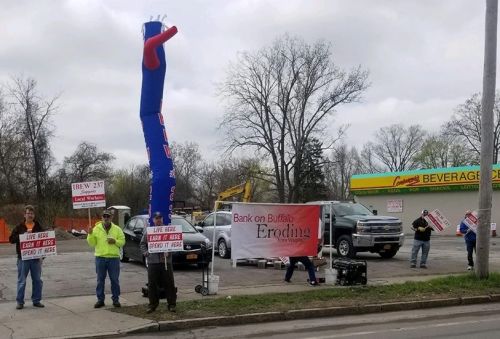 After serving nearly 12 years as Local 237’s Business Manager, Quarantello lost his re-election bid a couple of months ago.

I know he was disappointed, for a number of reasons, but I am told he recently spoke with Niagara-Orleans Labor Council President Jim Briggs – telling him that he wanted to continue to be involved in the Labor Council and a number of initiatives it was focusing on this year.

But that’s just the way Quarantello - who also loved to ride his motorcycle (which he did so many times over the years to help raise dollars for one worthy cause or another), was.

In reality, Quarantello’s actions, his dedication to his Union, to his Members and the community at large really did help to light up Niagara Falls over the years. 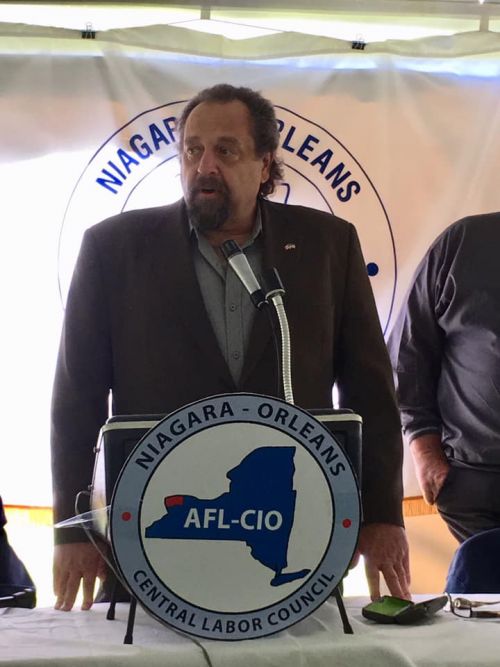 WNYLaborToday.com reached out to many who knew Quarantello and here’s what they had to say about a Western New York Labor Leader who will be more than missed:

Niagara-Orleans AFL-CIO Labor Council President Briggs: “Russ was the ‘ultimate’ Trade Unionist ‘who always put his Members first before everything.’  What he will be ‘particularly missed for was his commitment to the community of Organized Labor.’  He was the ‘first one to be there when someone else had a problem.’  ‘In our fight to save the Middle Class, Labor has a small army and when you take a guy out of it like Russ - it hurts.’”

Western New York AFL-CIO Area Federation (WNYALF) President Richard Lipsitz: “Russ was a ‘kind and gentle’ man - a ‘wonderful’ guy.  ‘I am very saddened by his unexpected passing.’  He was a ‘very fine Labor Leader who saw big picture issues better than a lot of other people.’”

Bill Jakobi, United Way of Greater Niagara/Niagara-Orleans Labor Council Labor Liaison: “He was a ‘gentleman, a solid’ Labor Leader ‘and his heart was in the community.’  He ‘was instrumental, he always volunteered and helped where he was needed.’  ‘And he never wanted to be out in front.’  He ‘wanted to be that silent partner - he didn’t want to be recognized.’”

Mike Welch, IBEW District 3 International Vice President: “When I came up (to Niagara Falls) a couple of months ago to speak at the (Niagara-Orleans Labor Council’s annual) Workers Memorial event, he took me around to all the (IBEW) job sites.  He was ‘very proud’ of Niagara Falls.  Russ ‘was one who rolled up his sleeves and was dedicated’ to the Labor Movement.  He ‘was there to help his Members and he was always looking out for his Membership.’”

Niagara County Legislator Mark Grozio, an IBEW Member who’d known Quarantello for more than 33 years and served as Local 237’s Director of Membership Development under Quarantello for the past 12 years: “This is a ‘huge’ loss.  He ‘always put everyone else first - and now, he’s the first to go.’  (I’ll always remember) his ‘dedication to the IBEW’ – ‘he loved his Union so much.’  He would ‘always be volunteering and he’d always be opening the Union Hall up for something, for some fundraiser, for our Apprentices.’  ‘He always put himself last.’  ‘He lived and breathed the IBEW and he loved his Local.’”

David Wilkinson, Business Manager of IBEW Local 106 in Jamestown and President of the Jamestown AFL-CIO Labor Council: “We ‘are all in shock.’  When I think about Russ ‘I think about how much this is a loss for his family and the Labor Community.’  ‘He would always provide help and he helped me (over the years).’  He was a ‘pillar’ of the community.  ‘His kind words and generosity.’  ‘He accepted you as you were and he gave more than he got.’”

Current IBEW Local 237 Business Manager John Scherrer: “Russ had a ‘big’ heart.  ‘Everything he did, he did for our Union.’  ‘That was his life, for sure.’  ‘And he left our Union way better that he found it and that’s a great legacy to leave us and the Membership.’  We were ‘broke’ when Russ took over ‘and he got us financially sound.’”

United Steelworkers (USW) Local 2001-represented Niagara County Sheriff’s Department Investigator Amanda Irons-Rindfleisch, who is an Executive Board Member of the Niagara-Orleans AFL-CIO Labor Council, posted the following on Facebook: “I am so shocked and saddened to learn that Russ is no longer with us.  He was so many things to all of us.  I could go on about all the nice things he has done for me and about how every time I brought my daughter to the (Union) Hall he would give her a little present, but I know that he treated everyone with such kindness.  He was a loyal, hard-working and humble Union Brother.  I am grateful for the things he taught me and the events he took me to in the short time we were friends.  I can’t imagine what your family is experiencing now but I am sure you will continue to watch over them.  Rest in Peace Brother.”

Lou DalPorto, a New York State United Teachers (NYSUT) Regional Representative who also sits on the Executive Board of the Niagara-Orleans AFL-CIO Labor Council, posted the following on Facebook: “Russ was a pillar for Labor, a man who made a difference.   That can never be taken away.  I hope this fact somehow eases the pain for his family and those of us who were colleagues and friends.”

He 'was and always be' a 'pillar' to our community and Union, 'my friend - my Union Brother, will be missed forever.' We 'agreed and disagreed' on the issues of our Union - and after our closed door meeting 'we came out to agreement to the best of our Membership.' I will 'cherish our time together with our families,' Love and my friend - 'I'll see you someday, we will laugh again together.' Posted by David Naus on August 12, 2019 at 8:20 pm
Thank You WNYLaborToday.com. Posted by wnylt@wnylt.com on August 12, 2019 at 8:02 pm