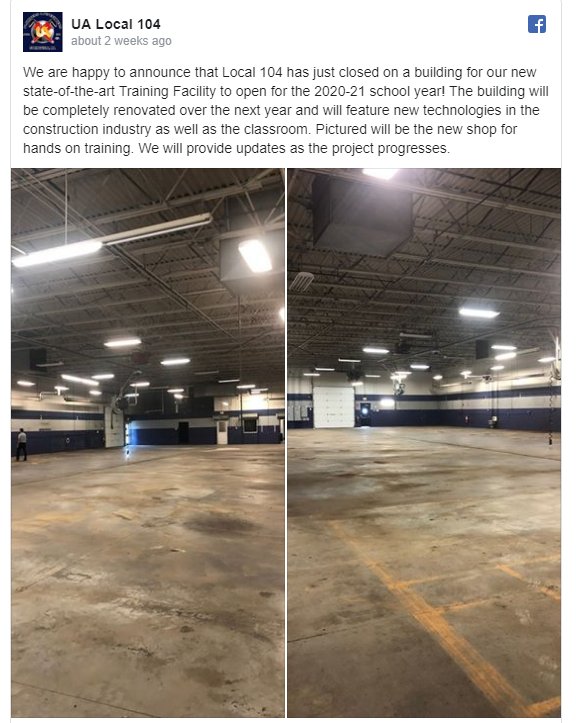 (HOLYOKE, MASSACHUSETTS) – The Plumbers and Pipefitters Union Local 104 Joint Apprenticeship and Training Fund has purchased one of two office pieces of property that once served as home to the Holyoke Mall, with plans to transform it into a new training facility.

The Holyoke Mall sold the other piece of property to the owner of a neighboring commercial property, who has plans for redevelopment.  Both transactions - together valued at more than $3.3 million and totaling 13 acres - were made public by filings at the Hampden County Registry of Deeds.

Holyoke Mall, which turned 40 years old in July, is owned by Pyramid Companies of Syracuse, New York.  The mall still owns more than 84 acres at the site, according to city records.

The Plumbers and Pipefitters Union Local 104 Joint Apprenticeship and Training Fund bought 86 Lower Westfield Road, the former Sears Auto Center, for $825,000, according to the deed.

The Union used to have smaller classes of only about six or eight students.

Then, with construction of MGM Springfield and an overall increase in interest in the Building Trades, class sizes in the last five years swelled to 12 or 16.

The Union has a total of 60 students in a five-year program.

“We ‘don’t even have enough room for them to park,’” Langone said.

In the new center, which will open in the Fall of 2020 after a $1.5 million renovation, the students will have shops for hands-on indoor instruction and a 16-booth welding shop - plus classrooms.

Local 104 is also planning to house its Union Hall inside the facility.

“People who are going into the Trades ‘are seeing the value of Union Membership,’” Langone said. “We’ve ‘had some unemployment, but now all the Members are out there working.’”

The Union’s 300 working Members contribute $1 an hour from their pay into a Training Fund, which is funding the building.

The fund will be paid back by the Apprenticeship Program over time, Langone said.

"With this, we can expand and go all the way up to one-hundred Apprentices," he said.

In a distributed statement (above), Local 104 said: We are happy to announce that Local 104 has just closed on a building for our new state-of-the-art Training Facility to open for the 2020-21 school year!  The building will be completely renovated over the next year and will feature new technologies in the construction industry as well as the classroom.  Pictured will be the new shop for hands on training.  We will provide updates as the project progresses.

To Directly Access This Labor News Story, Go To: https://www.masslive.com/business/2019/08/holyoke-mall-sells-land-building-plumbers-union-plans-training-facility-developers-has-plans-for-parking-lot.html?fbclid=IwAR24dQ5Sg2UtO1ftSrhsPTMrwDF0ubKl3bLqNhjxtBoy2B8KcUCownA4Ztk