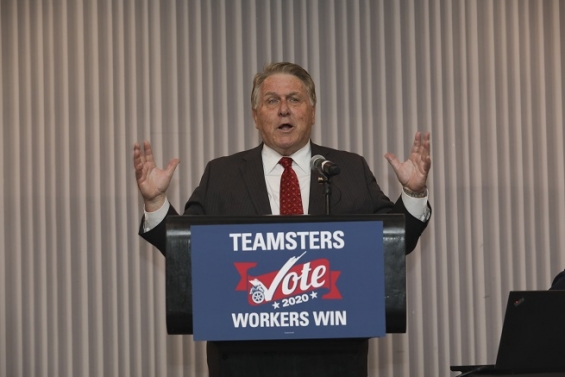 The 2020 Democratic Party Presidential Debates were just held in Detroit last week and I was hoping to hear more from the candidates about kitchen table issues that affect hard-working Americans.

Frankly, the whole thing was a bit of a disappointment.

Sure, there was plenty of talk about the future of health care in this country and even the topic of trade made an appearance.

Those are important matters.

However, when it came to discussing issues that would allow Workers to keep a foothold in the Middle Class - even through their Golden Years - there was little discussion.

The twin topics of pensions and retirement security were notably absent from the conversation both nights of the debates.

To call that an oversight would be an understatement.

At a time when Americans are grappling with how to support themselves and their families now and in the future, this country cannot turn a blind eye towards these matters.

For years, Teamster Workers and Retirees have been at the forefront of pushing the Multi-Employer Pension Reform issue and late last month, all those efforts came to fruition when the Pension Reform Bill this Union backed - H.R. 397 - cleared the House by a 264-169 vote in favor of the measure, with all of the Democrats - plus 29 Republican Lawmakers approving the legislation.

The victory could not have happened without the hard work of U.S. Representatives Richard Neal (Democrat-Massachusetts) and Peter King (Republican-New York), the lead co-sponsors on the bill who together fought to move the legislation and garnered support of their colleagues in both parties.

But the job doesn’t end there.

The measure now heads to the Senate, where the Republican-led Chamber will have to be convinced to take it up.

U.S. Senator Sherrod Brown (Democrat-Ohio) recently introduced a Senate companion Bill to H.R. 397.  It is S. 2254 and has 28 co-sponsors, including Senators Debbie Stabenow and Gary Peters of Michigan.

Teamsters who have been involved in this fight know passage will not be easy.

That’s why Workers across the Nation need to use the current August recess to reach out to Senators who are currently uncommitted and get them to support the legislation.

But all of us also need to look forward and elect candidates who pledge to stand up for retirement security more broadly.

As I’ve noted before, the Teamsters are in the midst of gathering opinions from our Members, which in turn the Union will use in its ongoing conversations with the Presidential Candidates.

Those responses, as well as candidate video interviews and participation in Pro-Union activities, will all influence the Teamsters’ endorsement decision.

Candidates seeking the blessing and support of the Teamsters must understand the importance Unions play in the working lives of the American Worker and the economy as a whole.

Supporting organizing efforts and standing for fairness and respect in the workplace is essential.

Workers deserve a President who is a partner that realizes that it is not just jobs, but the quality and dependability of those jobs that matters.

U.S. Leadership should realize that those who worked hard and played by the rules should have the ability to provide a comfortable life for their loved ones and retire with the benefits they were promised.

It’s time for all the Presidential contenders to stand with hard-working Americans.

To Directly Access This Labor Perspective, Go To: https://teamster.org/news/2019/08/hoffa-presidential-candidates-shouldnt-ignore-worker-concerns