Salon Reports: Trump Pretends To Like Union Members, But He Really Likes The Fat Cats  The Proof Is In Trumps Legislation, Regulation & Secretary Selections 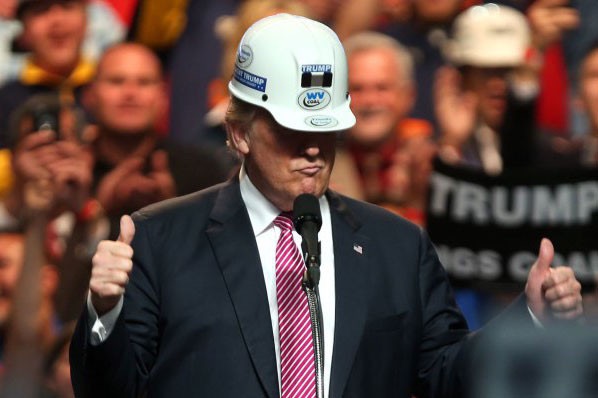 When Donald Trump ran for the Presidency, he said: “The American Worker will finally have a President who will protect them and fight for them.”

And now, how’s that working out for the American Worker?

When it comes down to picking sides - standing up for Workers’ Rights or lining the pockets of CEOs and shareholders - Trump aligned himself and his policies with the Fat Cats.

This cost Workers money and safety.

The truth is American corporations got a President who protected them and fought for them.

The proof is in Trump’s legislation, regulation and secretary selections.

The most recent example is Trump’s Twitter appointment of Eugene Scalia as Secretary of Labor.

This is the department specifically designated to "foster, promote, and develop the welfare of wage earners, job seekers and retirees.”

Scalia, though, has made his fortune over decades by fighting to ensure that the Big Guys -corporations - don’t, in fact, have to abide by regulations intended to foster, promote, and develop the welfare of the Little Guys - wage earners, job seekers and retirees.

That is who Trump chose to protect wage earners - a corporatist so egregious that when former President George W. Bush wanted Scalia as Labor Department solicitor, Bush had to give him a recess appointment because Republicans in the Senate balked at approving him.

This isn’t a glitch.

Although Trump is fond of surrounding himself with Union Members and asserting that they love him, he doesn’t really like Unions, especially ones that challenge him or dare to question his lies.

Remember how he personally attacked USW Steelworker (USW) Local President Chuck Jones who exposed Trump and Vice President Mike Pence for claiming to save 1,100 jobs at Carrier when they really preserved only about half that many - and then only after a grant of $7 million from the taxpayers of Indiana?

A President who supported Organized Labor would oppose Free Riders who won’t pay their fair share - but still want all the benefits of Union Membership.

A President who supported Unions would not delay or eliminate health and safety regulations designed to protect Workers from sickness and death.

He supported Mark Janus, an Illinois Government Employee who wanted everything for nothing.

To Continue Reading This Labor News Story, Go To: www.salon.com/2019/08/04/trump-pretends-to-like-union-members-but-he-really-likes-the-fat-cats_partner/?fbclid=IwAR2C_4E3WgU1_Z3oJM6AHpNrbe-j1jsTTnvmVl8dX2EbLzD0Gi6fL4nfN-w

The 'orange-skinned' billionaire 'is just that - a billionaire.' He 'couldn't give two shits about' the health and welfare of hard-working men and women 'at any level' of employment. It's a matter of 'pay to play' and 'that's exactly why' Corporate CEOs and their lobbyists 'have been so successful.' He's a 'con' man and it's always been about the money'. Posted by Dan Boody on August 8, 2019 at 8:11 pm