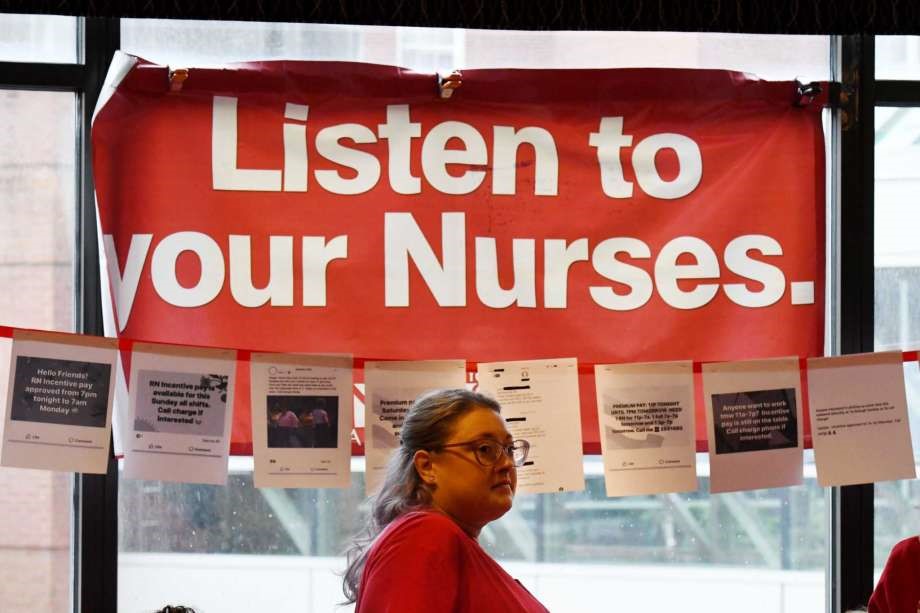 (ALBANY, NEW YORK) - As negotiations on their first-ever contract stretch on, Albany Medical Center Nurses and their supporters recently gathered to speak out about staffing issues they say are jeopardizing patient care.

Nurses have maintained for several years now that rising costs and stagnant wages are causing their colleagues to leave the hospital for higher-paying jobs elsewhere.

As a result, the remaining Nurses have been saddled with higher patient loads and managers are frequently forced to appeal for last-minute Shift Workers by offering "premium" or "incentive" pay.

Concern over Safe Staffing Levels is one of the primary reasons Nurses voted 1,161-to-582 last year to Unionize.

Today, roughly 2,000 of the hospital's 2,200 Nurses are Members of the New York State Nurses Association (NYSNA).

"It's a ‘really great place to work, so a lot of people are attracted to come here,’" said Karen Gerstenberger, a Registered Nurse (RN) who's worked at Albany Med for 37 years. "But when you have a family and ‘you have to pay a lot for health insurance or your wages barely even cover your mortgage, it's just easier to go someplace else with competitive wages and benefits.’"

With negotiations now centered around wages, benefits and staffing, Albany Med Nurses are working to raise public awareness of their concerns.

They had initially planned to picket outside the hospital in late July, but withdrew notice after the hospital lodged an Unfair Labor Practice (ULP) Charge with the National Labor Relations Board (NLRB), citing a lack of proper notice.

Instead of a picket, they decided to host a public forum at the Hilton Garden Inn across the street, which drew dozens of Nurses in red NYSNA gear, Local Labor Leaders and elected officials, including Democratic state Assembly Members Carrie Woerner and Phil Steck.

Jason Fuller said inadequate staffing has forced Nurses to work overtime in what he believes to be a violation of State Law, which prohibits hospitals from forcing Nurses to work beyond their scheduled shifts unless an emergency has been declared.

An RN in the hospital's Electrophysiology Lab, Fuller assists physicians who specialize in the electrical systems of the heart.  Such cases can take hours and if they begin near the end of a Nurse's shift, the Nurse feels pressure to work overtime, he said.

"Sometimes we're here until ten or eleven at night when we're supposed to be off at five or seven, depending on the shift," he said. "Human resources tells me,’ no, you're not mandated to stay, but my manager says that I am.’  ‘So it's very contradictory.’"

Nurses are seeking a voice when it comes to determining Safe Staffing Levels, which would vary by unit and patient acuity.

A patient in need of intensive care is high acuity and would demand more attention than a patient in observation or long-term care, for example.

Members of the Nurses' Negotiating Team say they proposed establishing a committee that would be composed of equal parts hospital administrators and Nurses, who would be tasked with determining adequate staffing levels by unit.

To Continue Reading This Labor News Story, Go To: www.timesunion.com/news/article/Albany-Med-nurses-air-safe-staffing-concerns-at-14270964.php