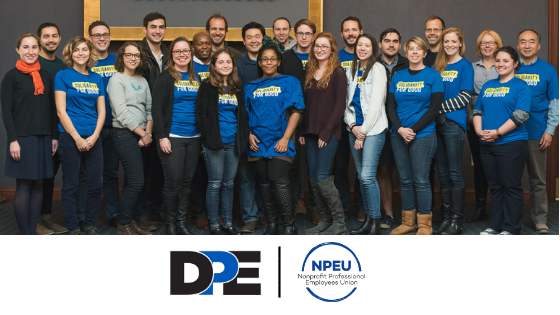 DPE partnered with NPEU - formerly the International Federation of Professional and Technical Employees (IFPTE) Local 70 ,  on a campaign to promote NPEU and inform Non-Union Professionals about the benefits of joining together in Union.

A large component of the campaign was inexpensive advertising on digital platforms.

The campaign resulted in more than 60 organizing leads over eight months with advertising costs of just under $2,600.

For professionals who want to join a Union, most do not know which Union is right for them.

DPE created the NPEU Campaign with the goal of bridging this information gap.

With the campaign, DPE wanted to test different digital tools to determine which were effective at making a Union accessible to the professionals it sought to recruit and getting the Union’s message in front of potential Members.

Ultimately, the measure of success was whether the campaign could generate organizing leads for the Union - which it did.

Understanding the components of the campaign and what made it successful can help to inform one way Unions can reach potential Members.

NPEU is a Union of Non-Profit Employees whose employers include the Center for American Progress (CAP), the Economic Policy Institute (EPI) and the Center for Economic and Policy Research (CEPR).

The focus of the campaign was to actively inform Non-Union Progressive/Non-Profit Employees that there was a Union for them and encourage them to connect with NPEU.

Additionally, the vast majority of NPEU’s potential members fall squarely within the demographic and political categories that indicate they would vote in large numbers for Union Representation in the workplace.

The first step in the campaign was to make NPEU more accessible to potential members, which required a rebranding effort.

At the time, NPEU was IFPTE Local 70 and part of the rebrand was to change its name to the Nonprofit Professional Employees Union.

The Union also got a new logo and website.

Building a Union Identity and website that reflected the Membership and spoke to similarly employed professionals was key to connecting with potential members.

To Continue To Read This Labor News Report, Go To: https://aflcio.org/2018/10/19/reaching-unorganized