Lets Be Honest About The Democratic Partys Record - In Closed Meeting, The National AFL-CIO President Tells Campaigns That Dems Shouldnt Expect Union Support If They Dont Change Their Ways 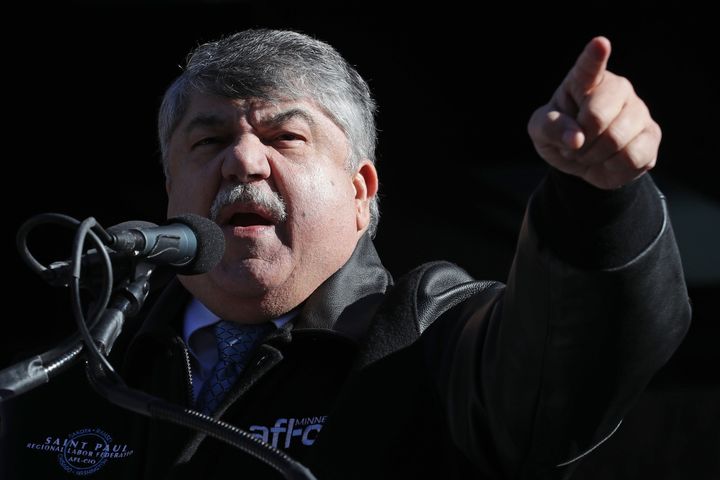 (DETROIT, MICHIGAN) – National AFL-CIO President Richard Trumka spoke at a closed meeting with representatives from the entire field of 2020 Democratic Presidential Candidates ahead of Wednesday’s (July 31st) debate in Detroit and his message was straightforward: “It’s time to do better,” The Huffington Post reports.

Trumka told attendees that while Republican President Donald Trump is enacting bad policies for Workers, Democratic Leaders need to reckon with their own role in creating an unfair economy.  He said “both parties” are to blame for a system that caters to the rich.

“We are ‘caught in a web of century-old’ Labor Laws ‘that prioritize unchecked corporate greed over all else,’” Trumka said. “We ‘can blame this White House all we want, but this isn’t new.’”

Trumka went on: “More often than not, the Republican Party ‘is bad’ for Workers.  (Trump) ‘is bad for Workers, but let’s be honest about the Democratic Party’s record.’”

He singled out the North American Free Trade Agreement (NAFTA) and the Trans-Pacific Partnership (TPP) as Democrat-backed Trade Deals that were tilted against the Working Class.

In attendance at the Detroit meeting was Democratic National Committee Chair Tom Perez, who, as former President Barack Obama’s Labor Secretary, promoted the TPP deal.  Trump pulled the U.S. out of the pact and it hasn’t been ratified.

“It’s ‘time to do better,’” Trumka said. “I ‘believe you can.’  ‘I believe you will.’  And Working People ‘are hungry for it.’  ‘But you can’t offer campaign rhetoric or count on Workers’ votes simply because you have a D next to your name.’”

The meeting included other Labor Leaders and AFL-CIO executives, as well as Rank-and-File Workers from a handful of Unions.

Those Workers also spoke to campaign representatives to convey their own concerns about the election.

The meeting took place at a Local Union Hall of the International Brotherhood of Electrical Workers (IBEW) in Detroit.

Trumka’s remarks reflect a long-standing frustration within Organized Labor that Democrats take their support for granted.

Unions are a pillar of the Democratic base and play a central role in getting Democrats elected, not just through campaign contributions but via canvassing and Get-Out-The-Vote (GOTV) efforts.

The National AFL-CIO, a Labor Federation of 55 Unions, typically runs a massive ground game to support the Democratic Presidential Candidate.

Even though Unions have added Members in recent years, the overall share they represent of the workforce has been falling for decades.

Unions have been making the case for vast reforms to Labor Law so that it would be easier for Workers to bargain collectively with their employers.

Trumka said Democrats share responsibility for the current state of affairs: “You ‘need to prove’ that this party ‘is the one and only party for Working People.’  ‘And recognize that Unions and collective bargaining are the single best way to make this economy work for everyone.’”

Unions are in a strong position to influence the Democratic primary, thanks to a large field and a shift in the party toward more Progressive Policies.

After coming out early for Hillary Clinton in the 2016 cycle, several Unions have said they will sit tight this time to see which candidate makes the most compelling case for the nomination.

That said, talk about collective bargaining has been limited so far and got barely any airtime in the two Detroit debates.

Trumka made clear Unions expect to hear more: “Convince our Members ‘and you’ll have the country’s largest and most effective movement for Working People on your side.”

To Directly Access This Labor News Story, Go To: www.huffpost.com/entry/labor-puts-presidential-candidates-on-notice-lets-be-honest-about-the-democratic-partys-record_n_5d43215de4b0ca604e2ed07f?ncid=engmodushpmg00000003&fbclid=IwAR0htzVYR5ikBgBSuBYZyCtChGqCyjvszANPW9NQOVBDRWxcDhgoUzoecf0&guccounter=1&guce_referrer=aHR0cHM6Ly93d3cuZmFjZWJvb2suY29tLw&guce_referrer_sig=AQAAAA22Ofze4uKd6c4DR-IHya19TWVrpabc4v7A_C9hQGhZVGW2IKUXnqnlTaY5tSnXsdlDprT9eJmT2DnrESHJsB9tkWSA0_oywTqT4yz9WAfsbDaslWMnhO42vNwZVjViyGMdjvhErHuzS_nXym_E5ChYCxc_cDWpZHBBsQXHPBKf