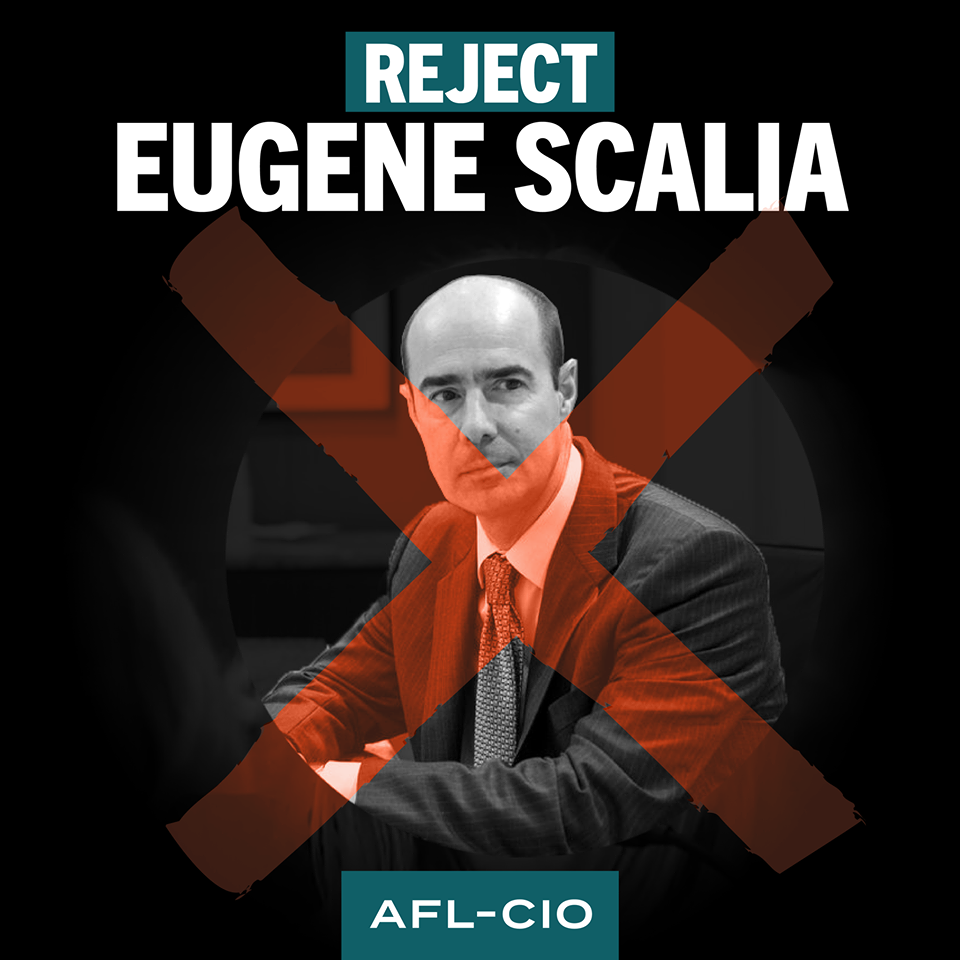 Acting Chief Patrick Pizzella and Eugene Scalia, if confirmed, are expected to push through controversial rules opposed by Democrats and Unions.

Trump has yet to formally nominate Scalia, but critics are already vowing to put a spotlight on that agenda and Scalia’s work as a lawyer for businesses in high-profile Labor fights.

“Scalia ‘is not going to help folks at all and that’s why it’s so important that we have a group of candidates that are pushing and supporting issues that have impact on Working Families,’” American Federation of State, County and Municipal Employees (AFSCME) National President Lee Saunders told The Hill.

Kermit Kaleba, Managing Director of Policy at National Skills Coalition, said the administration had failed to keep their promises on “making Workers a priority.”  “This nomination ‘doesn’t send a signal that that’s changing,’” Kaleba said.

Union Leaders supported Democratic Nominee Hillary Clinton in 2016, but she only won Labor Households by eight points over Trump - the narrowest margin since 1984.

Those voters helped deliver Midwestern states that will be crucial to Trump’s re-election.

Union Leaders say keeping those voters could be a challenge for Trump if Scalia pushes a Conservative agenda at the Labor Department.

As a lawyer, Scalia fought Unions in many important cases.

Among the most notable was his defense of Boeing in 2011 after the National Labor Relations Board (NLRB) accused the company of trying to open a factory in South Carolina as retaliation against striking Workers in Washington State.

“The ‘rich and powerful have teamed up with the Republican party to push for measures at all levels of government designed to decimate Unions and collective bargaining.’  Eugene Scalia is the ‘latest’ example,” the campaign of U.S. Senator Elizabeth Warren (Democrat-Massachusetts) told The Hill. “He’s ‘opposed implementing financial reforms at every turn and has spent his entire career representing giant corporations and Wall Street over American Workers.’”

A campaign aide for U.S. Senator Bernie Sanders (Independent-Vermont), also a 2020 Presidential contender, said Trump’s Department of Labor and the NLRB have “overturned Labor Protections and Collective Bargaining Rights at every turn.”  “In Bernie’s view, there is ‘really no way the Middle Class in this country is going to grow unless we build the Trade Union Movement,’” the aide added.