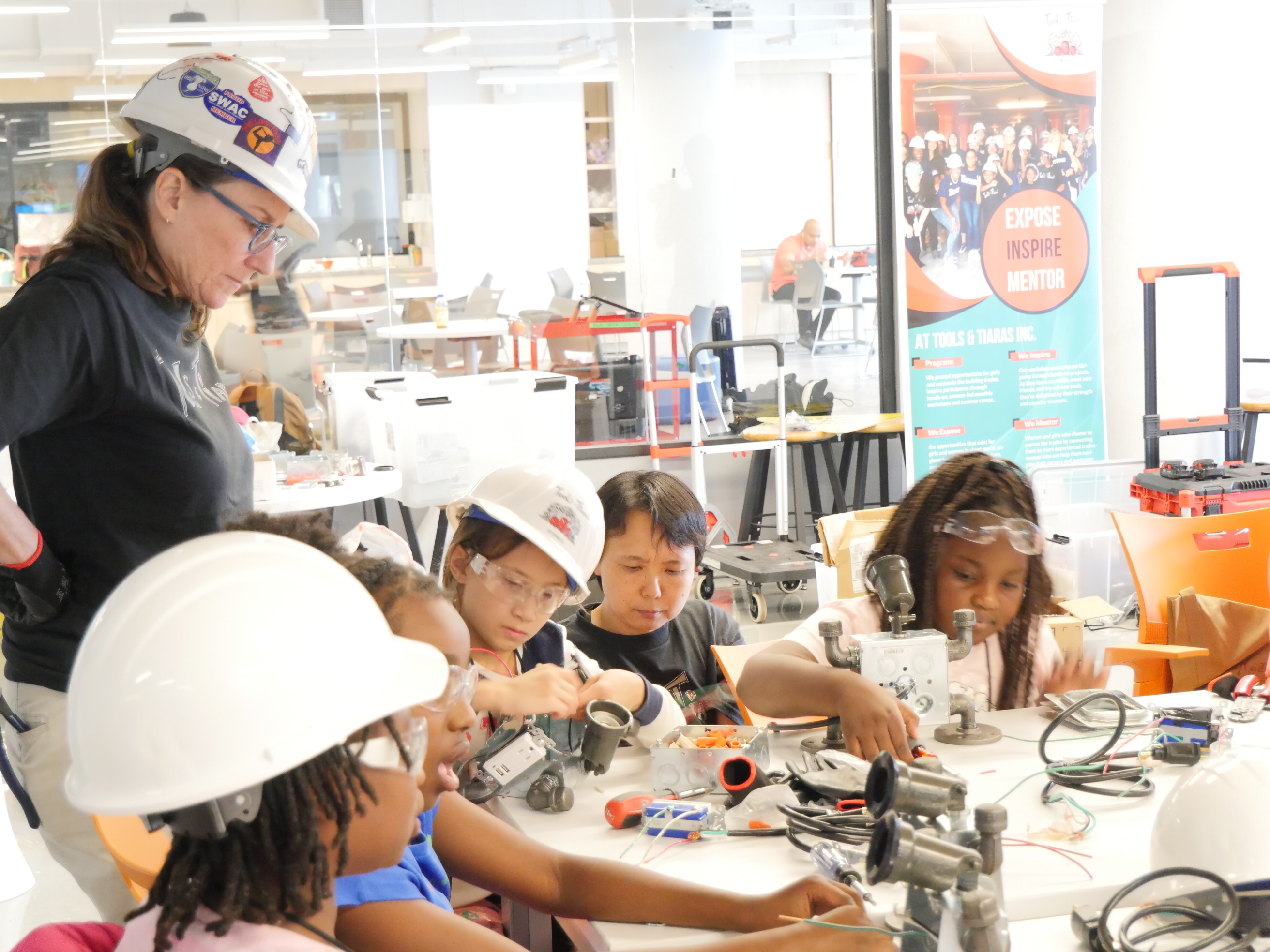 (BROOKLYN, NEW YORK) – “This is ‘actually amazing to me,’” fourth-year Plumbers Apprentice Nkosa Barrett said while surveying the hive of activity going on inside the third floor of the Brooklyn STEAM Center.  “No one ‘ever taught me these things when I was this age.’”

All around the industrial space girls six-to-16-years-old enrolled in the Tools & Tiaras Summer Camp are learning the basics of electrical wiring or gleefully removing insulation, swapping a pair of cutters for wire strippers

“Jobs ‘don’t have genders,’” Barrett continued. “My grandmother ‘never said’ this (toy) ‘is for girls, this is (toy) for boys’ – ‘but to be able to know that you can do electrical, you can do plumbing, you can do anything that a man can do.’  ‘It’s such an amazing thing to lean at such a young age.’”

Barrett is just one of the Union Tradeswomen - Plumbers, Carpenters, Electricians, Stagehands and others - who are volunteering their time and expertise introducing Tools & Tiaras Campers to careers in the Building Trades.

“For the Tradeswomen, ‘it’s a feeling of pride that we’re passing on traditions that somebody has taught us,’” Local 1 Plumber and Tools & Tiaras Founder Judaline Cassidy said.

“The girls are learning that insulation for the wire ‘is like putting on your clothes’ - the Tradeswomen ‘are finding really creative ways to teach them stuff they are going to use every day.’  ‘I’m fascinated and I want to do more.’  ‘I feel like with a little help we can get more girls, and even boys, inspired,’” Cassidy said.

Presently, women represent less than 10% of Workers in the Building Trades.

“You ‘don’t have to be a secretary,’” Sheet Metal Workers Local 28 member Toni Campbell-James said “(This program) ‘allows young girls to see themselves outside of just the typical work.’”

Helping to increase the number of women in the Building Trades was one of the key reasons Campbell-James decided to enroll her six-year-old daughter Parker in the Tools & Tiaras Summer Camp.

“Usually, when you ask young girls ‘what they want to be,’ they say lawyer or doctor – ‘something where they see themselves dressed up’ – ‘pretty’ careers.  ‘They don’t know the joys of getting on the train with your filthy outfit and having the whole seat to yourself.’  I think it ‘broadens’ their horizons.  ‘It gives them a plethora of avenues they can go,” she said.

Slots in this year’s Tools & Tiaras Summer Camp filled up quickly and there is now a waiting list, although, at the time of this writing openings were still available for Week Two of the program being held from August 26th through the 30th at the Morris Plains Community Center in New Jersey.

“I ‘wanted my daughter to learn a little bit about plumbing and electricity and carpentry because, usually, you don’t see workshops for girls,’” Queens Mom Mina Reynoso said. “I thought this (program) ‘would be more interesting being hands on and learning about tools.’”

To Continue Reading This Labor News Story, Go To: http://laborpress.org/different-kind-of-summer-camp-introduces-girls-to-the-building-trades/