In Response To Its Union-Busting Campaign & The Firing Of Three Workers, Labor Calls For A Consumer Boycott Of SPoT Coffees Buffalo Area Locations

The Union Working With SPoT Employees Who Are Trying To Unionize Asks The General Public To Support The Boycott - Company Allowed Its Workers In Rochester To Unionize, But Will Not Allow Their Employees In Buffalo To Do The Same 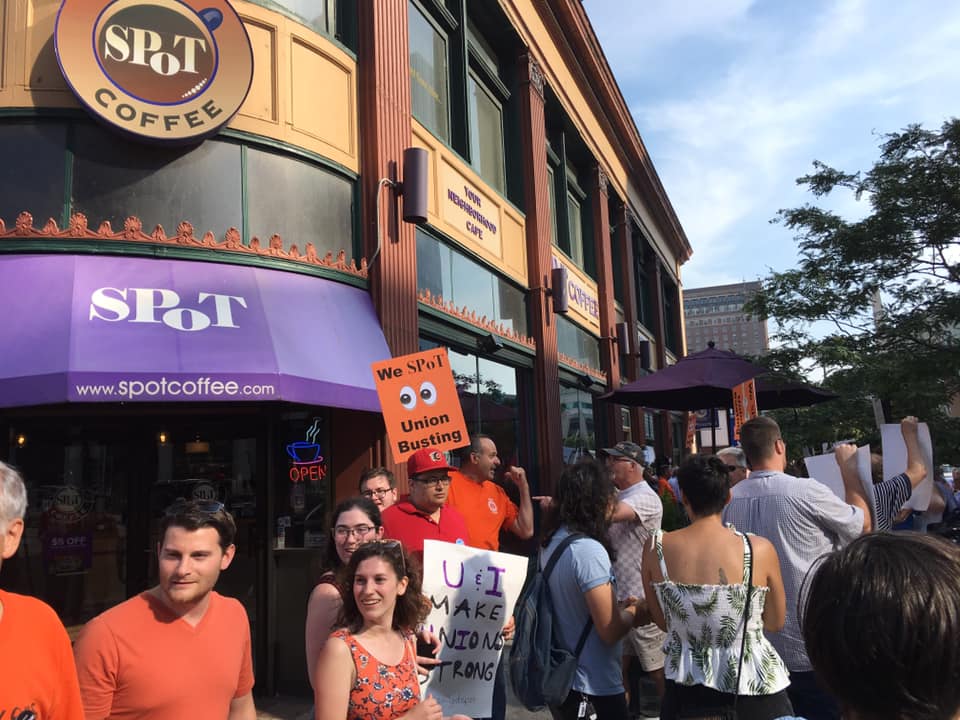 (BUFFALO, NEW YORK) - In response to the company’s Union-Busting Campaign that has included the firings of three Workers involved in the organizing effort, a consumer boycott was called for SPoT Coffee’s Buffalo area locations during a Monday (July 29th) rally that brought together a number of area Unions who boisterously displayed their support.

The Union working with the SPoT Employees who are trying to Unionize - Workers United - asked the general public to support Organized Labor’s called-for boycott in light of fact that management allowed its Employees In Rochester to Unionize, but will not allow their Workers In Buffalo to do the same.

“These Workers ‘are showing a great amount of courage and we will fight alongside you.’  ‘We will not let this happen on our watch to allow this company to stop’ Unionization.  ‘We must send a message that Union-Busting in not okay and that there are consequences’ (for SPoT Management’s actions).  ‘That’s why we are calling for a boycott of every SPoT Coffee Shop and franchisee here in Buffalo,’” Workers United for Upstate New York Manager Gary Bonadonna, Jr. (Pictured Below/WNYLaborToday.com Photo) told those in attendance at the rally - which included representatives from the Western New York AFL-CIO Area Labor Federation (WNYALF), the United Auto Workers (UAW), the Amalgamated Transit Union (ATU), Service Employees International Union (SEIU), the United Steelworkers (USW), the Civil Service Employees Association (CSEA), the New York State United Teachers (NYSUT), the American Federation of State, County & Municipal Employees (AFSCME), the Teamsters, the International Union of Painters and Allied Trades (IUPAT) and the International Brotherhood of Electrical Workers (IBEW). 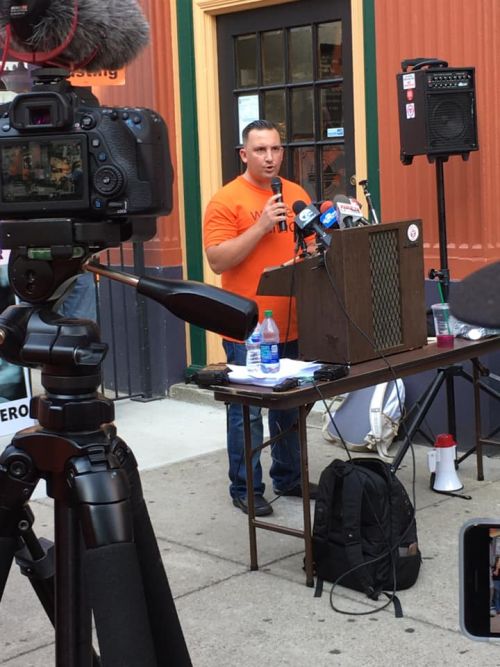 Bonadonna, the fired SPoT Coffee Workers and Members of the SPoT Workers Organizing Committee also called for: The rehiring of the two fired Workers and a manager who refused to give the company their names - with back pay; A public apology to its entire workforce from SPoT Coffee Management; Admitting publicly to their Anti-Union activity and pledging “not to do it again;” and Agreeing to abide by a set of ethical guidelines for Union Organizing. 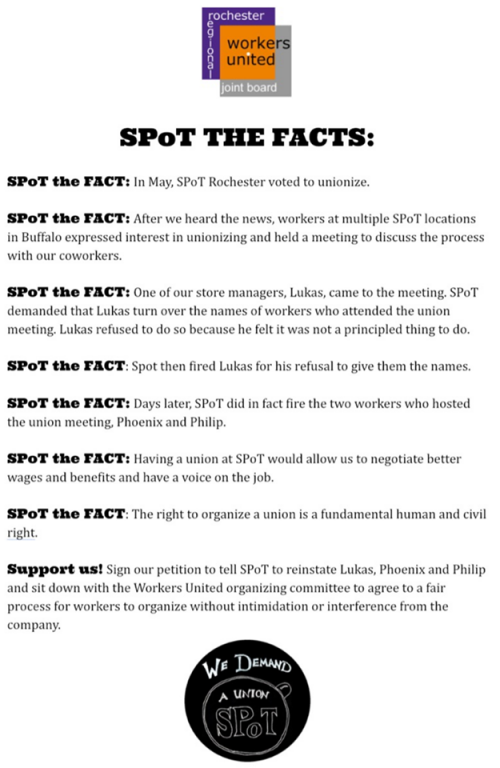 “If ‘not, we will escalate’ our boycott,” Kay Kennedy - a SPoT Coffee Worker and Member of the SPoT Workers Organizing Committee, pledged to those attending the rally. 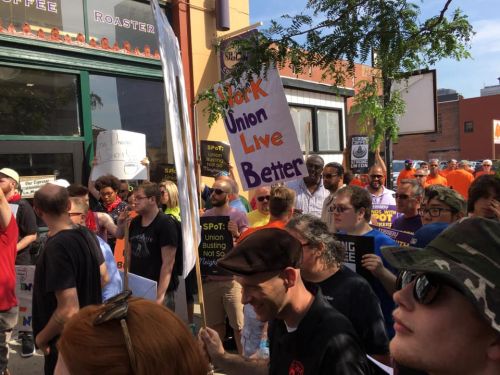 “We ‘will do everything we can do to help these Workers,’” WNYALF President Richard Lipsitz told the nearly 200 who took part in the rally that took place in front of SPoT Coffee’s Downtown Buffalo Headquarters on the corner of Delaware Avenue and Chippewa.

“They ‘will get what they are looking for - a Labor Union and a fair contract,’” said Lipsitz, whose Labor Organization’s Member Union Affiliates combine to represent more than 140,000 Unionized Workers across the Western New York Region.

The three Workers were fired only two weeks into the Union Organizing Campaign here in Buffalo, where there are “more than one hundred Workers” employed by SPoT Coffee at as many as eight area locations, Workers United Representatives said.

Meanwhile, in Rochester, there was only one No vote cast in the Rochester SPoT Coffee Unionization Drive that has now created 16 new Union Workers employed at SPoT Coffee’s East Avenue location, Bonadonna said.

Anton Ayoub, the President and CEO of Valshire SPoT Incorporated, had issued the following statement after the Rochester Unionization Vote: “Our Employees are an integral part of everything we do.  We care highly about them.  We respect their decision to join a Union and we hope to conclude a contract with the Union that is not only beneficial to our Employees and the Company, but one that also enhances our mission to serve the community.” 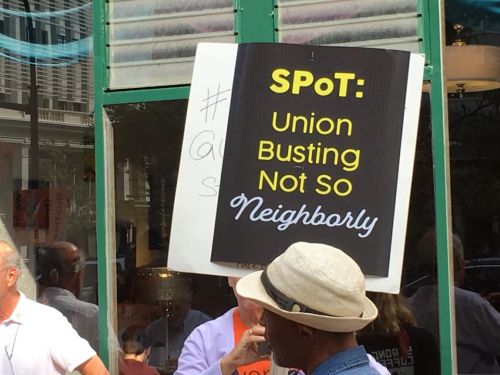 Several Members of the SPoT Workers Organizing Committee in Buffalo also spoke at the rally, which at times broke out in boisterous chants of: “SPoT Coffee - Strong Union!;” “We Demand a Union SPoT;” “Get Up, Get Down - Buffalo’s a Union Town!”

The SPoT Organizing Committee Representatives also led the crowd in another chant, this one aimed at SPoT Coffee’s Chief Operating Officer Dan Hensley: “Dan Hensley You’re No Good – Treat Your Workers Like You Should!”

Phoenix Cerny (Pictured Below, Holding the Small Bullhorn/WNYLaborToday.com Photo), who said he was fired from SPoT Coffee because of his personal actions to lead the Union Organizing Campaign here in Buffalo, told those at the rally: “I worked for SPoT for (4.5) years as an Assistant Manager ‘and we know the reason why (he was fired), but my Co-Workers know how much better it can be.’  ‘Things can be better.’  ‘If we fight - we win.’” 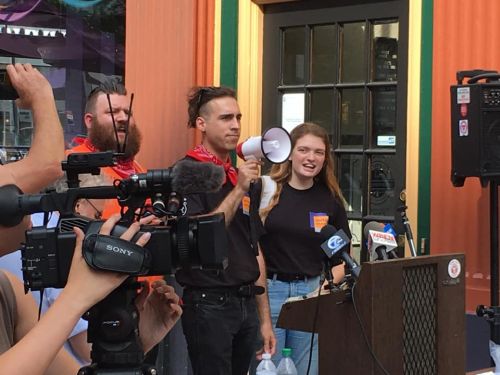 “I got a phone call from my store manager who told me that Dan Hensley said: ‘Get rid of Phil.’  ‘I was given no reason,’” another fired SPoT Coffee Worker involving in the Organizing Campaign - Phil Kneitinger (Standing to the Left of Cerney Above/WNYLaborToday.com Photo) - told those at the rally.  “I’ve worked here for four years and ‘I don’t see the same company anymore.’  SPoT Coffee ‘can be better.’  ‘We know what SPoT did was wrong.’  ‘We just want to go back to work.’  ‘I believe we will win.’”

Lukas Weinstein, who declined to provide SPoT Management with the names of his fellow Co-Workers who attended the Organizing meetings after being asked to do so and was subsequently fired, also spoke: “I ‘would like my job back, but we are not going to back down.’” 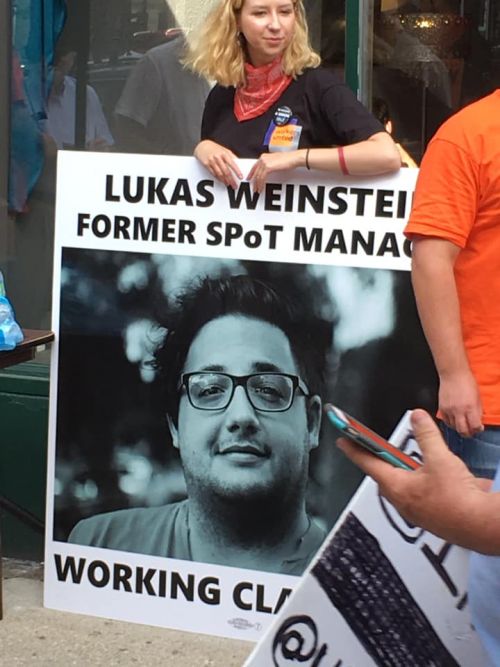 A petition being circulated in support of the SPoT rehiring the fired Workers and allowing them to continue their attempt to Unionize their fellow SPoT Employees has garnered 1,200 signatures to date and the outpouring of public support from customers who spend their money at the company’s coffee shops has been phenomenal, said those who spoke.

“It’s ‘important for the Workers to know how much you believe in us,’” SPoT Worker Ben Steele told those at the rally.  “SPoT ‘has deleted’ their Facebook Page too (apparently after receiving so many complaints and comments in support of the Workers).  ‘It won’t go well for SPoT if they continue to ignore us.’  ‘It’s impossible for us to be ignored.’  ‘They’re not winning here.’  ‘Strong Coffee - Strong Union!’  ‘We are here to stay!’” 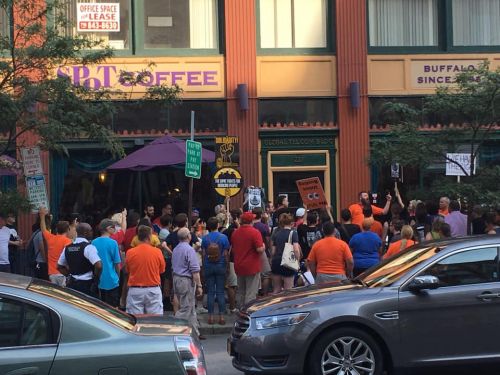 Workers United has filed charges against SPoT Coffee with the National Labor Relations Board (NLRB), which is investigating the Worker firings.

In a press release, Bonadonna said: “Companies like this don't fire Union Leaders just to get rid of them.  They fire them in order to scare the entire workforce.  The community must hold SPoT Coffee accountable.  It is a reprehensible violation of the fundamental Civil Right to organize a Union when Workers are fired.  It destroys the atmosphere for a free and fair vote on whether Workers want a Union.  If we allow this to occur, then we will never have a fair society for Working People.”