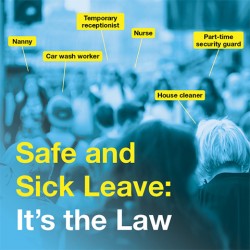 Since the Law went into effect, DCWP has received more than 1,800 complaints about the Law and obtained more than $10 million in fines and restitution for more than 32,000 Workers.

The city’s investigation also found that American Airlines failed to pay Sick Leave at the required rate, failed to allow Employees to use accrued Sick Leave, illegally required advance notice and medical documentation for fewer than three days, and failed to provide the Notice of Employee Rights.

“All Workers in New York City ‘are entitled to’ Paid Sick Leave and American Airlines ‘is not above the law.’  Workers in major transportation hubs where thousands of people pass through everyday ‘should not have to choose between going into work sick or getting in trouble for exercising their right to take a Sick Day,’” Department of Consumer and Worker Protection (DCWP)  Commissioner Lorelei Salas said.

“American Airlines ‘has violated’ their Ground Crew’s rights ‘by engaging in practices that make Workers afraid to exercise their rights because they will be disciplined for using a Sick Day.’  ‘Not only are these practices illegal, but it is disappointing when an employer puts business above their own Employees’ health.’  ‘We will not tolerate any employer that violates Employees’ rights to their Paid Safe and Sick Leave,’” Salas said.

The City DCWP is seeking $375,000 in restitution for more than 750 Ground Crew Workers, including its Agents, Representatives, Fleet Service and Mechanical Employees.

To Directly Access This Labor News Report, Go To: http://laborpress.org/american-airline-violate-nyc-sick-leave-law/

Employers and Employees can visit nyc.gov/workers or call 311 for more information.