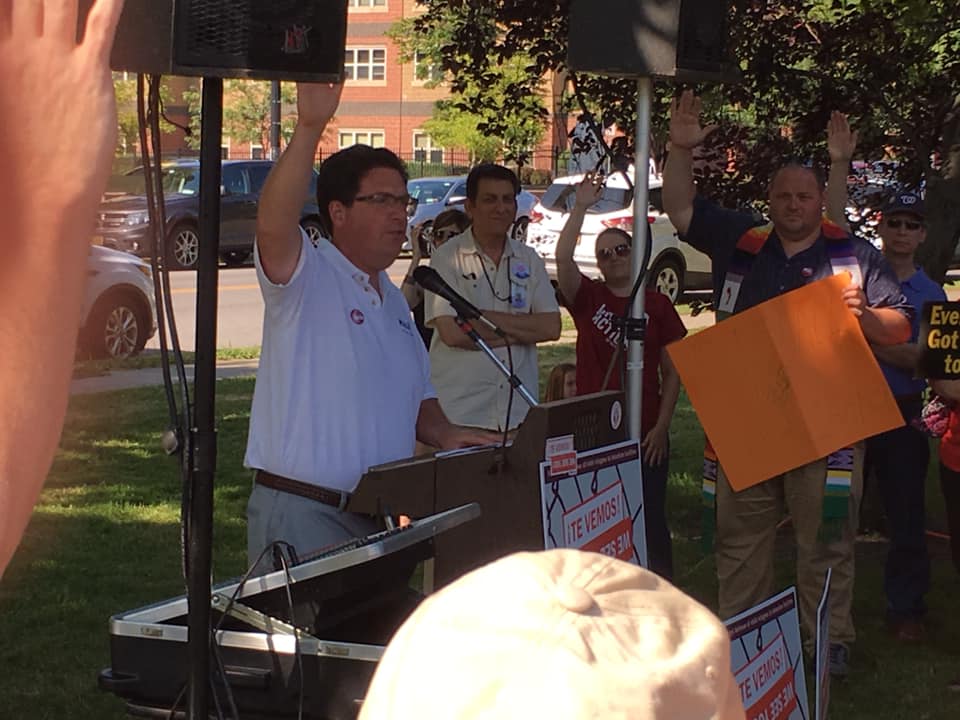 (BUFFALO, NEW YORK) -  The message on the sign was clear: Te Vemos - We See You.

Led by a number of Buffalo Labor Unions, more than 150 Labor Leaders and Representatives, Community and Immigrant Rights Advocates and Elected Officials gathered in Columbus Park on Buffalo’s West Side late Friday afternoon (July 26th) to decry the Trump Administration’s despicable policy of separating, incarcerating and dividing Immigrant Families at the U.S.-Mexico Border and housing kids in cages. 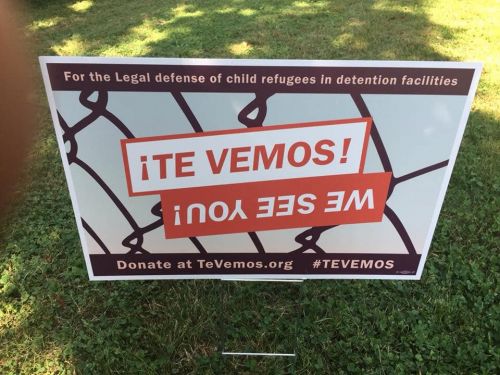 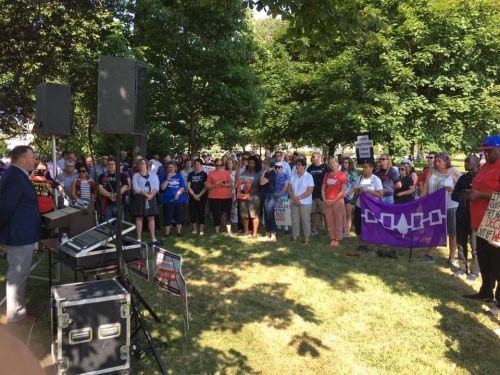 “The WNYALF is ‘honored’ to have been asked by the organizers of this rally to convene today’s event.  ‘It is clear to any thinking member of the human race that the policy of the government at the Southern Border of the United States is an abomination of the most egregious nature.’  Children ‘have been separated from their parents and families have been divided, people are living in squalor inside cages.’  The title of this rally is ‘Te Vemos’ - We See You.  That slogan is ‘aimed two places’ - first and foremost, at the children and their families at the border.  ‘We see you, your pain, your terror and your hope for a better life.’  Also, we see you current administration and we will ‘continue to challenge you.’  We are ‘completely and unalterably opposed to this violation of everything that is good and positive to the human spirit.’  ‘It must end.’  Further, ‘it is being implemented in the name of the American People.’  Our Labor Federation ‘is in favor of a just policy that provides real relief to those fleeing poverty and violence whether they are refugees, asylum seekers or just ordinary people looking for a better life.’  ‘Further, we must take a moment to pause and reflect on the sickness emanating’ from (1600) Pennsylvania Avenue that says ‘go back to where you came from.’  This ‘monstrous idea is meant to split’ Working People, ‘to confuse the issue’ from its economic and social roots and ‘to disrupt the opposition to the movement towards a one man dictatorship in our country.’  ‘Let’s be clear:’ The people of Central America and Mexico ‘are not the enemy’ of the American Working Class, ‘but the current occupant of the White House is.’  The Labor Federation ‘is not in the business of refugee resettlement or any associated endeavors, but we do want to help.’  We ‘urge all those whose core mission is to create progressive, life affirming policies to work together, and keep up the pressure.’  ‘We are ready to make a contribution in this direction.’  We ‘really have no choice because today it may be the Immigrant People and People of Color, but as sure as the sun will rise tomorrow, it will then be other vulnerable populations.’  ‘The world has experienced this situation before - we must fight to stop it from ever happening again.’” 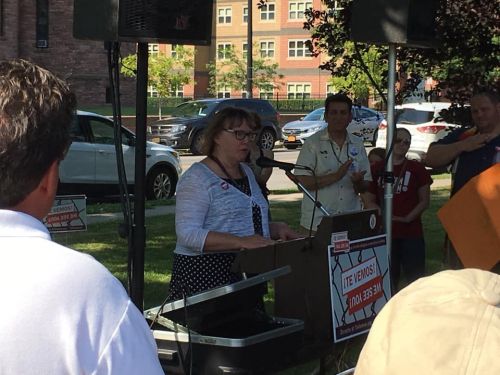 Several other speakers also spoke at the rally, including:

BTF Representative Eve Shippens-Nieves (Pictured Below/WNYLaborToday.com Photos): “This is ‘personal’ to me.  My family were Jewish refugees fleeing (the Holocaust).  ‘We must oppose these racist views, these Trump Concentration Camps’ and say: ‘Never Again!’  ‘We must close the camps - now!’” 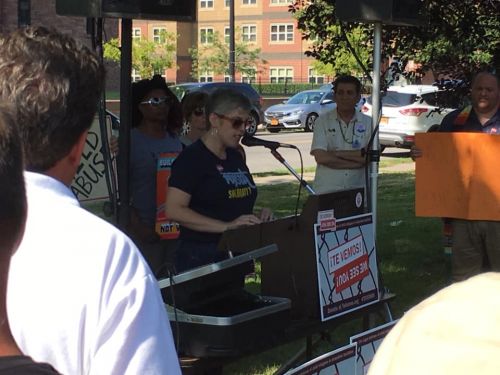 Kenmore Teachers Association President Peter Stuhlmiller (Pictured Below/WNYLaborToday.com Photo): “Our ‘most precious resource is our children and there is no keener revelation of someone’s soul when it comes to how it treats its children.’  There is ‘no debate or compromise’ (on this).  ‘Children cannot be used as tools.’  This is ‘immoral, it is unjust and it is un-American.’  ‘We must end the separation of children from their families.’  There are more than (3,000) kids separated from their families.  ‘To take no social responsibility is unconscionable and we cannot repeat the sins of our past.’” 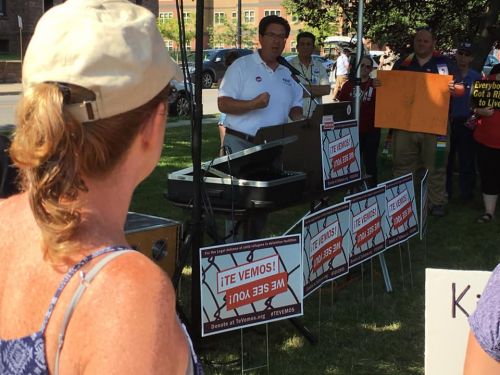 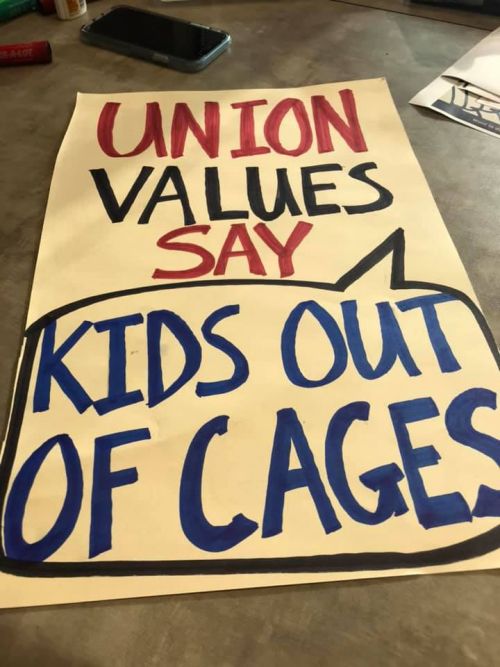 Among those Unions who had representatives attending the rally were the Communications Workers of America (CWA), the WNYALF, BTF, the New York State Public Employees Federation (PEF), the New York State United Teachers (NYSUT), United University Professions (UUP) and the International Union of Painters & Allied Trades (IUPAT), as well as the Coalition for Economic Justice (CEJ), representatives from the Close the Camps Coalition, and a host of City, Town and State Elected Officials. 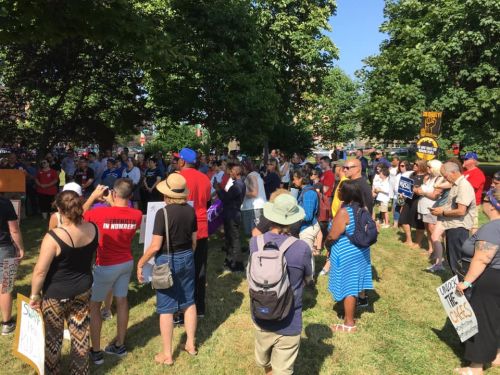