Single Mother Of Three - One Of 25 Women Graduating From Millwright Apprenticeship Program - Says: "I Feel Like I Made The Right Choice." 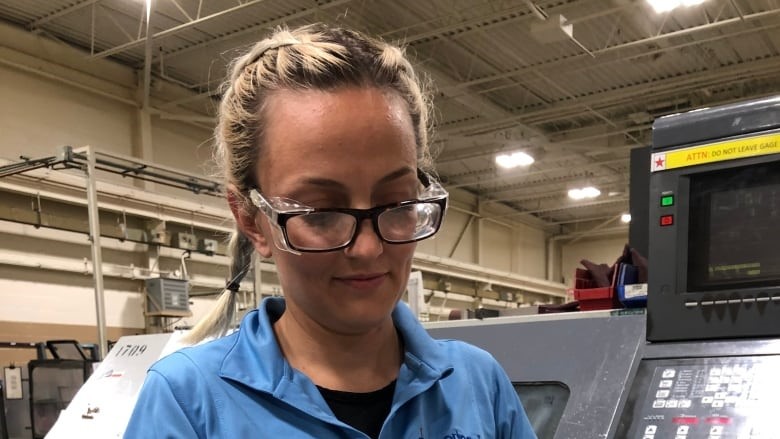 (WINDSOR, ONTARIO/CANADA) – A single mother of three - one of 25 women graduating from a Millwright Apprenticeship Program In Canada, says: "I feel like I made the right choice."

Rebecca Chenier (pictured above) is one of 25 women who are graduating from the CNC Industrial Mechanic Millwright Pre-Apprenticeship Program, which is provided by Women's Enterprise Skills Training (WEST) of Windsor, Incorporated.

WEST breaks down barriers for women in a non-traditional industry by providing free tuition for their St. Clair College programs, free child care and even bus tickets to help with transportation.

"It feels almost normal now," said Rebecca Chenier, one of the graduating students who works with electrodes, writes programs and reads blueprints.

But four-years-ago, Chenier was starting over.

As a single mother of three, Chenier was tempted to take a different job with an immediate pay check.

Instead, she went to a six-month Apprenticeship Program through WEST.

"It was ‘really exciting.’  I was ‘on the edge of discovering something new,’" Chenier said. "I ‘feel like I made the right choice.’"

Chenier said it was overwhelming, but she decided to just go for it and now she's almost done her Machinist Apprenticeship at CentreLine.

She still has an exam to take, but she's grateful for the unique opportunity the WEST Program offered her.

To Directly Access This Labor News Report, Go To: www.cbc.ca/news/canada/windsor/west-grad-millwright-apprenticeship-windsor-1.5208187?fbclid=IwAR3jW-BP_QBylpqklydOJp1TlpHbYLtcuUUJoByZVJsntJasHtEMwIZUrFE