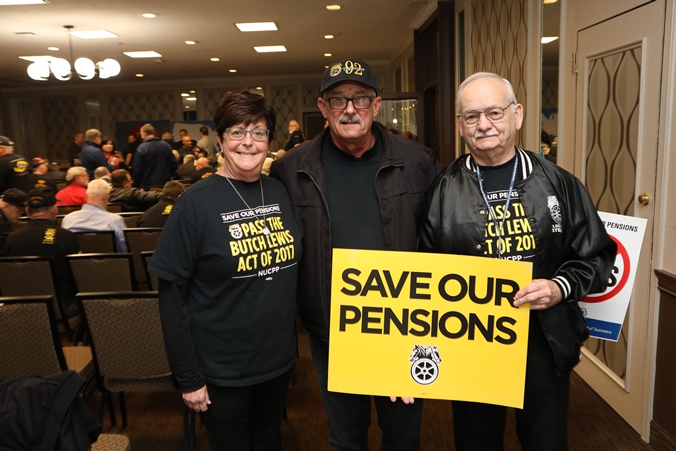 (WASHINGTON, D.C.) – The U.S. House of Representatives voted Wednesday (July 25th) to pass H.R. 397 - the Rehabilitation for Multiemployer Pensions Act, more commonly referred to as The Butch Lewis Act.  The legislation is an essential step to help secure the retirement security of more than 1.5 million Workers and Retirees nationwide.

The measure, offered by U.S. Representative Richard Neal (Democrat-Massachusetts), was first introduced in Congress in November 2017.  The measure has 209 co-sponsors, including nine Republicans.  As in 2017, U.S. Representative Peter King (Republican-New York) again joined with Congressman Neal in introducing the Bill in the 116th Congress.  The House approved the measure in a 264-to-169 vote with 29 Republicans voting in support of the legislation.

“After years of ‘tireless work’ by Teamster Retirees, Members and Local Union Officers, the House ‘rewarded their efforts by passing this critically important legislation,’” Teamsters General President Jim Hoffa said. “Lawmakers ‘cannot delay any longer – this legislation must now be approved by the Senate so that American Workers retain their hard-earned retirement security.’”

There are more than 300 Multiemployer Pension Plans across the country - including the Teamsters’ Central States Pension Fund - that are in danger of failing.

Before the vote, Western New York Congressman Higgins said: “More than two-hundred pension plans covering (1.5 million) Americans ‘are seriously in danger of failing.’  Working families from Buffalo to Boston ‘are threatened with their pensions and their retirement savings being ripped away from them.’  The Butch Lewis Act ‘provides stability and retirement security for millions of humble, hardworking Americans and I urge its passage.’”

The financial crash in 2008 caused severe harm to many Multiemployer Pensions and further inaction could force these plans to make dramatic cuts or stop paying out benefits entirely to the Retirees who depend on their pensions.

Estimates indicate that the additional burden on social programs that would be caused by millions of Americans losing their pensions would far exceed the Congressional Budget Office’s cost estimate for the Bill, which is $48.5 billion over 10 years.

The Teamsters have been fighting for years for a legislative solution and have worked with lawmakers on both sides of the aisle to do so.

The measure would boost financially troubled Multiemployer Pensions Plans so they don’t fail.

It would create a new agency under the U.S. Treasury Department that would sell bonds in the open market to large investors, such as financial firms.  Those proceeds would then be used to bolster faltering pension plans as part of a 30-year loan program.

To Directly Access Part Of This Labor News Story, Go To: https://teamster.org/news/2019/07/house-passes-teamsters-backed-pension-reform-bill?fbclid=IwAR0ULWZaTCWfnmDJInvwIHnAjv8WZDhTWU-LCk-bOst0JAKm9hTtZHkTAKI