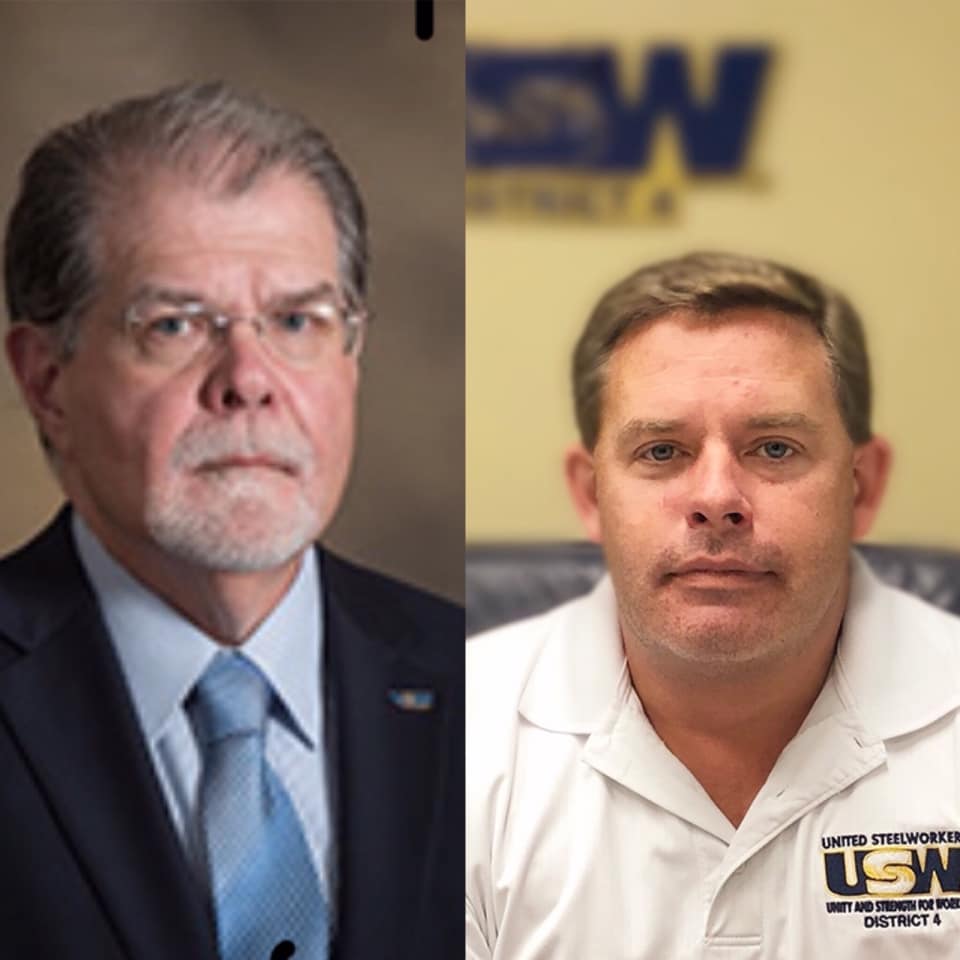 (BUFFALO, NEW YORK) – The United Steelworkers (USW) have announced changes to its District 4 Staff, which impact Western New York and New York State.  Del Vitale (pictured above, on the left) has been named to succeed John Shinn as District 4 Director and Staff Member David Wasiura (pictured above, on the right) has been elevated to the position of Assistant to the Director.

Vitale had served as Assistant to his predecessor, John Shinn (pictured below, on the right, with Vitale) - who left that post to become the USW’s new International Secretary-Treasurer. 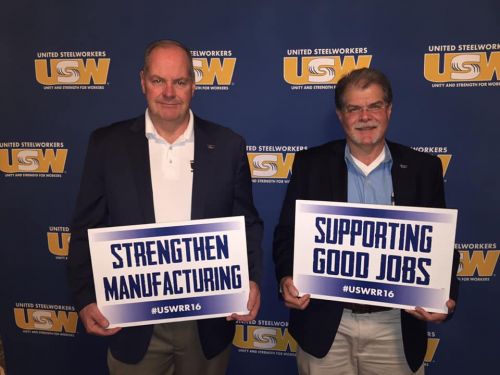 Vitale - who has served as Assistant to the District Director since 2015 - is the nephew of a Union Paper Worker.  He has been a proud Union Member his entire working life, since being hired at the age of 18 as a Slitter Operator at Oneida Packaging, later Pacquet-Oneida, in Clifton, New Jersey.  There, Vitale joined the United Paperworkers International Union (UPIU), which later became part of the USW.

Vitale quickly took on a leadership role in his Union, becoming a Member of the Local 318 Bargaining Committee at the age of 20.

He was elected Chief Steward of his Unit in 1980 and later served on the Local’s Executive Board, as a Trustee and as the Local’s Recording Secretary.

In 1995, Vitale joined the Staff of the UPIU.  Since then, he has worked with USW Members to bargain contracts across a wide range of industries, including paper, pharmaceuticals, health care, manufacturing, printing, chemicals, aluminum, non-profits and the public sector.

In 1999, Vitale became a PACE Staff Member when the UPIU merged with the Oil, Chemical and Atomic Workers International Union (OCAW) to form the new Union.

Six years later, PACE merged with the United Steelworkers of America (USWA) to form the USW.

Throughout his career, Vitale has taken on leadership roles in a number of high-profile organizing campaigns.

In 2014, he was instrumental in helping organize 500 Nurses at Robert Wood Johnson Somerset Hospital in New Jersey.

In 2012, Vitale became the District 4 Sub-Director of the Edison, New Jersey Office and served in that position until he was named Assistant to then-Director Shinn in 2015.

Meanwhile, it was also announced USW District 4 Staff Representative David Wasiura has been named as the new Assistant to the Director.

Wasiura launched his USW career in 1996 when he followed in his father’s footsteps and began working at the American Brass Facility in Buffalo.

Over the next 15 years, he served in various positions with USW Local 593, including Vice President and as a Member of the Bargaining Committee.

“As a fourth-generation Steelworker, I became involved to give back to my Union for all it has provided to myself and my family,” Wasiura said. “As the District Organizing Coordinator, I have been able to give other Workers the same opportunities that I had because of the Union.  I look forward to working with Director Vitale to grow and strengthen District 4 and fight for all Working People.”

In 2004, Wasiura volunteered for the Kerry-Edwards Presidential Campaign, working primarily in Northwestern Pennsylvania, knocking on doors and talking to Union Members about issues critical to Working Families.

In June 2010, Wasiura began working in USW’s Political Department in Pittsburgh, where he helped to coordinate the USW’s National Field Program to support Pro-Worker Campaigns across the country.

In January 2013, he returned to District 4 to work with Local Unions in New Jersey and New England before returning to Buffalo as the District’s Organizing Coordinator.

“Dave is a hard-working devoted Unionist who will be an asset to District 4 and our Members,” Vitale said.

Since returning to Buffalo, Wasiura has served as Coordinator of the District’s Next Gen Program and as a Member of the Western New York AFL-CIO Area Labor Federation (WNYALF) Executive Board.