House Votes To Raise The Federal Minimum Wage - Labor Says The Raise The Wage Act âWill Reduce Inequality And Strengthen Our Communities, Lifting Families Out Of Poverty And Putting Upward Pressure On Wages For Everyoneâ 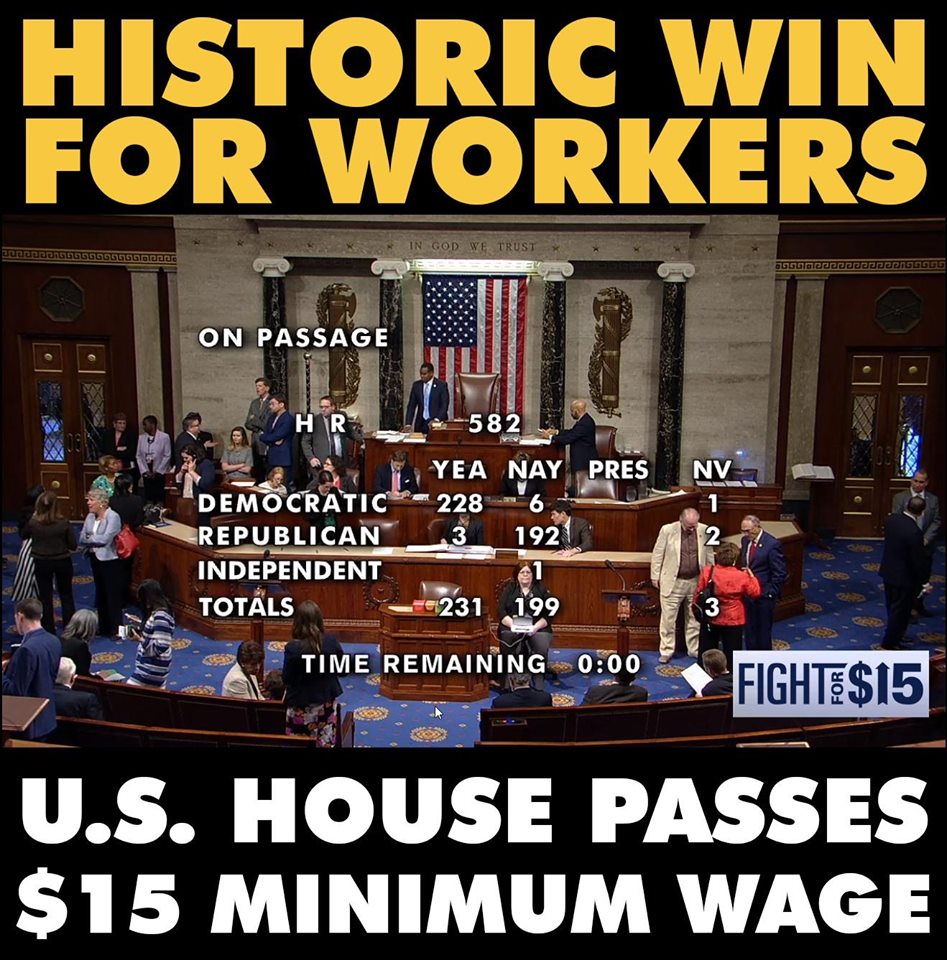 (WASHINGTON, D.C.) - The House voted 231-to-199 Thursday (July 18th) to raise the Federal Minimum Wage to $15 per hour incrementally over six years – and, in the process, eliminate the exploitative Tipped Minimum Wage.

The Raise the Wage Act would impact the wages of roughly 34 million Americans, those in the know have stated.  Additionally, it’s estimated that an increase to a $15/hour Minimum Wage would lift 1.3 million Americans out of poverty, including 600,000 children.

In response to the passage of the Raise the Wage Act, American Federation of State, County & Municipal Employees (AFSCME) President Lee Saunders released the following statement:

This legislation is a long time coming.  The Federal Minimum Wage has stayed flat for the last decade, while corporate profits and CEO compensation have skyrocketed.  Raising the wage will make a huge difference in the lives of millions of our hardest-working people, many of whom are juggling multiple jobs just to keep their heads above water.  A $15 Minimum Wage will reduce inequality and strengthen our communities, lifting families out of poverty and putting upward pressure on wages for everyone.  Absolutely everyone working full-time should be able to provide the basic necessities - food, housing, health care and more - that their families need to survive.

The legislation has been endorsed by a number of Labor Organizations, including: AFSCME; The United Steelworkers (USW); the National Education Association (NEA); as well as the National Women's Law Center, and more.

New York State passed legislation that took effect in 2016 that raised the State Minimum Wage, which is currently $11.80/hour, to $15, gradually - 29 states and Washington, D.C. also have Minimum Wage Laws that are higher than the Federal Minimum Wage.

However, Progressives had issued a last-minute warning to their Moderate colleagues not to help Republicans make any last-minute changes to the Bill through the procedural maneuver known as a Motion to Recommit (MTR).

If Moderate Democrats helped Republicans add what the Progressives considered poison pill language to the measure, members of the Congressional Progressive Caucus were prepared to vote against it, the group’s Co-Chairs, U.S. Representatives Mark Pocan and Pramila Jayapal, said.

The MTR would have added language to exempt small businesses with fewer than 10 Employees or annual gross income of less than $1 million from implementing the $15 minimum wage.

Ultimately, Democrats defeated the MTR Republicans offered, 210-to-218, which cleared the way for a smooth - but partisan - final passage.

The Raise the Wage Act has been a top priority for many House Democrats and came to the floor with 205 co-sponsors.

The Federal Minimum Wage has been raised nine times since it was first enacted in 1938.

The original Bill would have incrementally increased the current $7.25 Federal Minimum Wage to $15 over five years, but a manager’s amendment folded into the Bill upon adoption of the rule for debate extended the timeline to six years.

Under the measure, once the Minimum Wage reaches $15 per hour, it would continue to be adjusted for inflation.

The Bill would also increase the Sub-Minimum Wage for Tipped Employees, teenagers and Employees with disabilities until they all equal the general Minimum Wage.

The movement advocating an increase to the Minimum Wage has grown in recent years.

Fast Food Workers and others have walked off the job to demand a Living Wage and the right to Unionize.

Strikes have emerged in cities across the country as Workers embraced the “Fight for $15” rallying cry.

And in 2016, Democrats adopted the $15 per hour Minimum Wage as part of their party platform for that year’s elections.

For More On This Labor News Story, Go To: www.rollcall.com/news/congress/house-votes-to-raise-federal-minimum-wage