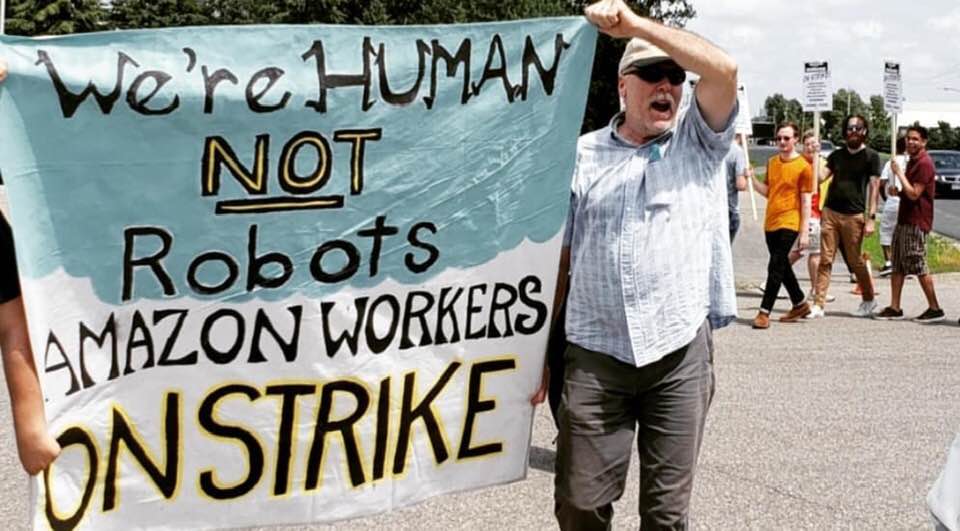 (SHAKOPEE, MINNESOTA) - Amazon conducted its fifth annual Prime Day, which has been expanded to 48 hours this year.  Designed to enlist (and keep) Prime members, it is the company's biggest shopping event of the year - on the same level as Black Friday - with extensive discounts and deals across the entire site.  But at a time when Amazon would likely prefer that all its Employees hunker down to meet increased demand, a group of Warehouse Workers in Shakopee, Minnesota went out on Strike.  It isn't the first time Amazon Workers in Shakopee have raised their concerns, but it will be the first major work stoppage event for Amazon in the United States and could be a harbinger of things to come.

In 2016, the Fulfillment Center in Shakopee opened and Amazon heavily recruited from the surrounding East-African Muslim Immigrant Population at the time.

In a report last year, The New York Times tells a story of how a Worker by the name of Hibaq Mohamed made requests for prayer breaks.  Even though they were granted - according to State Law, she was still expected to meet her daily quota of packing 230 items per hour despite the reduced time, but instead of sitting idly by, she and a group of Workers organized to complain.

They were one of the first Worker Groups in the country to stand up to Amazon and, eventually, to sit in negotiations.

That was just the beginning.

When Amazon canceled a commuter bus to a Minneapolis neighborhood, some started a petition to reinstate it.

When Prime Day fell during Ramadan, the Workers asked for a lighter workload to accommodate their fasting schedule.

The group also received help from the Awood Center, a non-profit that aims to help East African Workers, helping them organize and educating them on Worker Rights.

"Issues like these would pop up, and people would react," said William Stolz, a Worker at Amazon's Shakopee Warehouse, to Engadget.

Stolz was one of the Workers organizing the upcoming Strike on Prime Day.

He is a "Picker," and his job is to pick an item up, put it in a tote, which then goes down the line to get packed.

He's required to pick at least 320 items an hour to meet his quota.

"I usually have to go faster than that though, just to make sure I go enough over to hit my numbers for the week," he said. "It comes down to scanning like one item every eight seconds."

The group eventually got to a point last September and October where they had two big meetings with Amazon management.

They raised concerns over the speed of work, the physical and mental toll they deal with on a daily basis and the assurance that the company was taking safety and injuries seriously.

After a month, Amazon management had come back to them without committing to any substantial changes.

To Continue Reading This Labor News Story, Go To: www.engadget.com/2019/07/15/amazon-prime-day-strike/?fbclid=IwAR3OADcKfvuttB1tI5MSU96TnVOw-G0LLGWlBedJ-K0QuM9Y9_kT0livHHg