Movie Night At The Union Hall: CWA Local 1122 Looks At A Way To Create Camaraderie & Solidarity Within Its Ranks By Inviting Its Members & Their Families To A Very Simple Event That Just Might Do The Trick 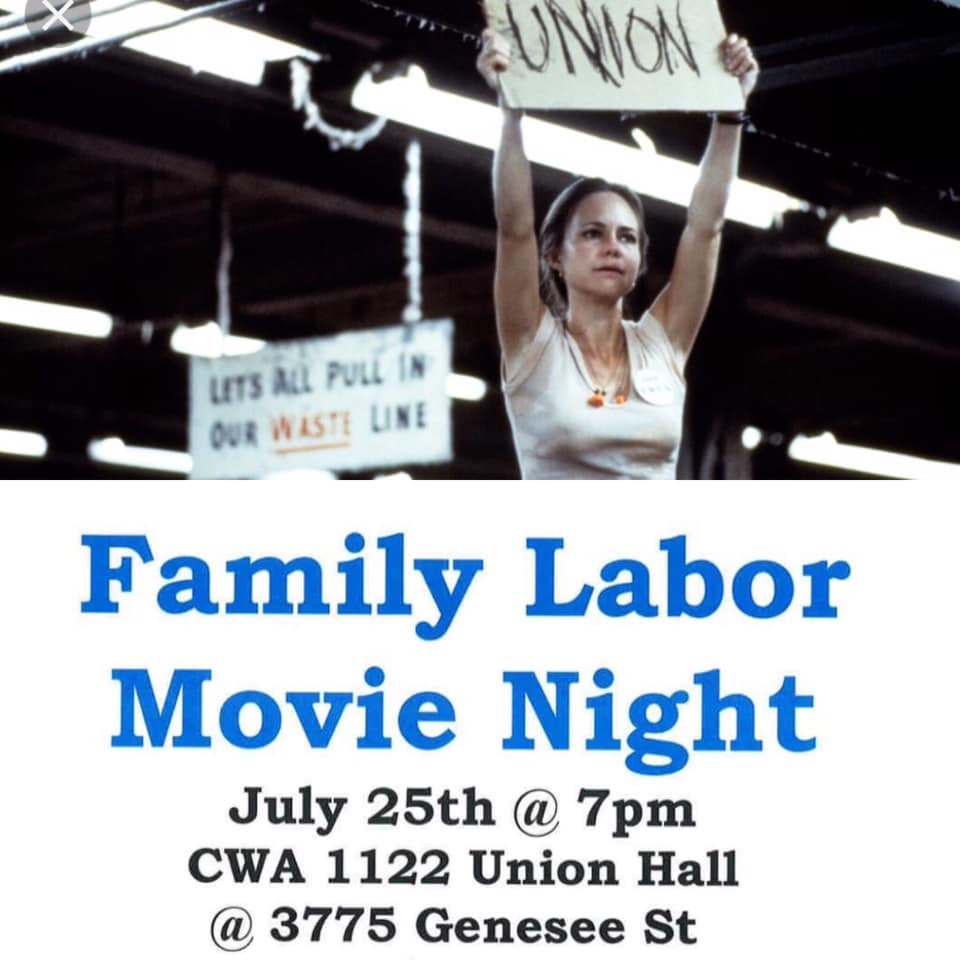 (BUFFALO, NEW YORK) - So, how can a Labor Union engage its Members, and their families, in an event that produces camaraderie and solidarity, while mixing in a bit of Union Education at the same time?

The Local’s Human Rights and Social Committee has come up with an simple idea that just might do the trick: Movie Night at the Union Hall.

And to get it going, Local 1122 is putting out the word to its nearly 1,500 Members, their spouses and their kids that they’ll have popcorn and cotton candy when giving them the opportunity to watch – together - the iconic Labor Movement movie: Norma Rae.

“Kids ‘need to know’ (about the Labor Movement) ‘and we need to educate the next generation’ (of Union Workers).  ‘It’s good to remember these things,’” Lori Marranca, a Member of CWA Local 1122’s Human Rights and Social Committee, who helped come up with the movie night idea, told WNYLaborToday.com.

“We’ve ‘got to get our younger Members and their families more involved and I’m glad (the Committee) did this,’” CWA Local 1122 President John Mudie, who also serves as President of the Buffalo AFL-CIO Central Labor Council, told Your On-Line Labor Newspaper.

So on Thursday, July 25th at 7 p.m. - inside the Local’s Genesee Street Union Hall that’s located just a landing strip away from the Greater Buffalo Niagara International Airport in the Suburb of Cheektowaga, Union Representatives hope their hall will be packed with parents and kids watching Norma Rae, the story of a Textile Worker played by Academy Award-winning Actress Sally Field, who attempts to form a Union in the heavily Anti-Union South - which is viewed as a classic by those in the Union Movement.

Like so many others before them, that unforgettable image of Textile Worker Field holding up a small sign high above her head inside the manufacturing facility where she worked, with just one word scribbled on it: “Union,” will hopefully be seared in their minds as they move forward in life.

“This will be the ‘first of three’ (CWA Local 1122 Movie Nights at the Union Hall),” Mudie said.  “And ‘kicking it off with Norma Rae, the story of trying to form a Union, is a problem many Workers today still face.’  ‘Everyone needs to be educated on the Union Movement.’  ‘Many times we just aren’t given this stuff.’”

In addition to the movie, the popcorn and cotton candy, Marranca - a Union Steward at Verizon - says her Committee is also looking to incorporate into the evening’s festivities a Union trivia contest “to further incorporate the history of Unions” into what the Local is offering its Membership that evening.

“This is ‘something fun’ (to offer our Members and their families).  ‘Something that they can all go out and do something together and not just sit at home one night.’  ‘Hopefully, they will come here,’” she said.

CWA Local 1122 Representatives said the second of the three offered movies will more than likely be scheduled sometime during the month of August.

A decision on what will be shown has not been made as yet, but more than likely another Union-oriented or “kid-friendly” film will be considered, they said. 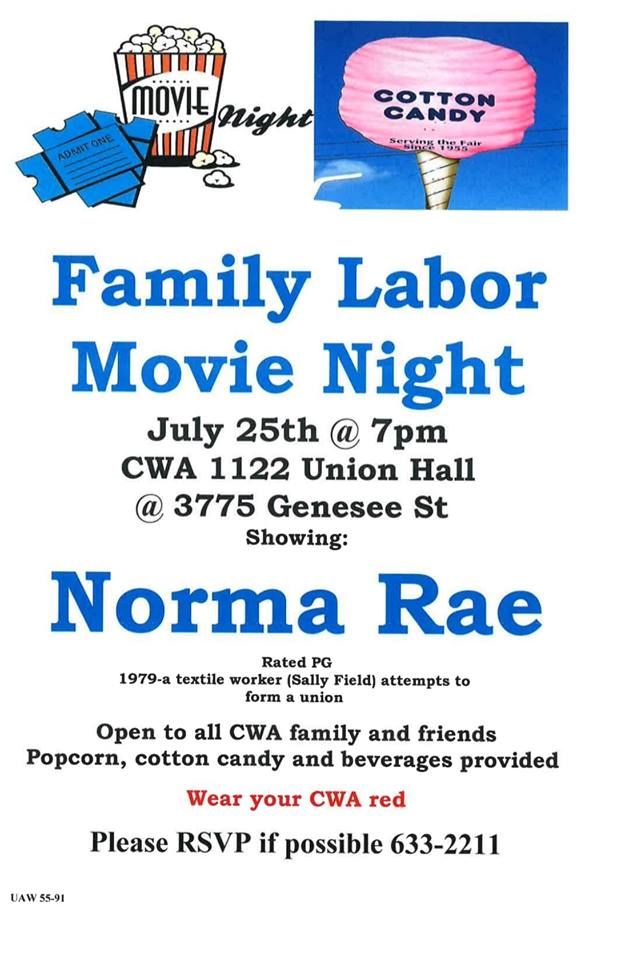 I've commented in public and on WNYLaborToday.com's On-Line Labor Newspaper that the Communications Workers of America (CWA) 'is one real progressive thinking and acting' Labor Union - 'at every level.' The movie night concept 'is smart.' I'm hopeful others Unions 'realize the worth of this initiative and start their own' movie night and/or other 'very progressive action to keep educating' the Members and their families. Posted by Dan Boody on July 21, 2019 at 7:50 am