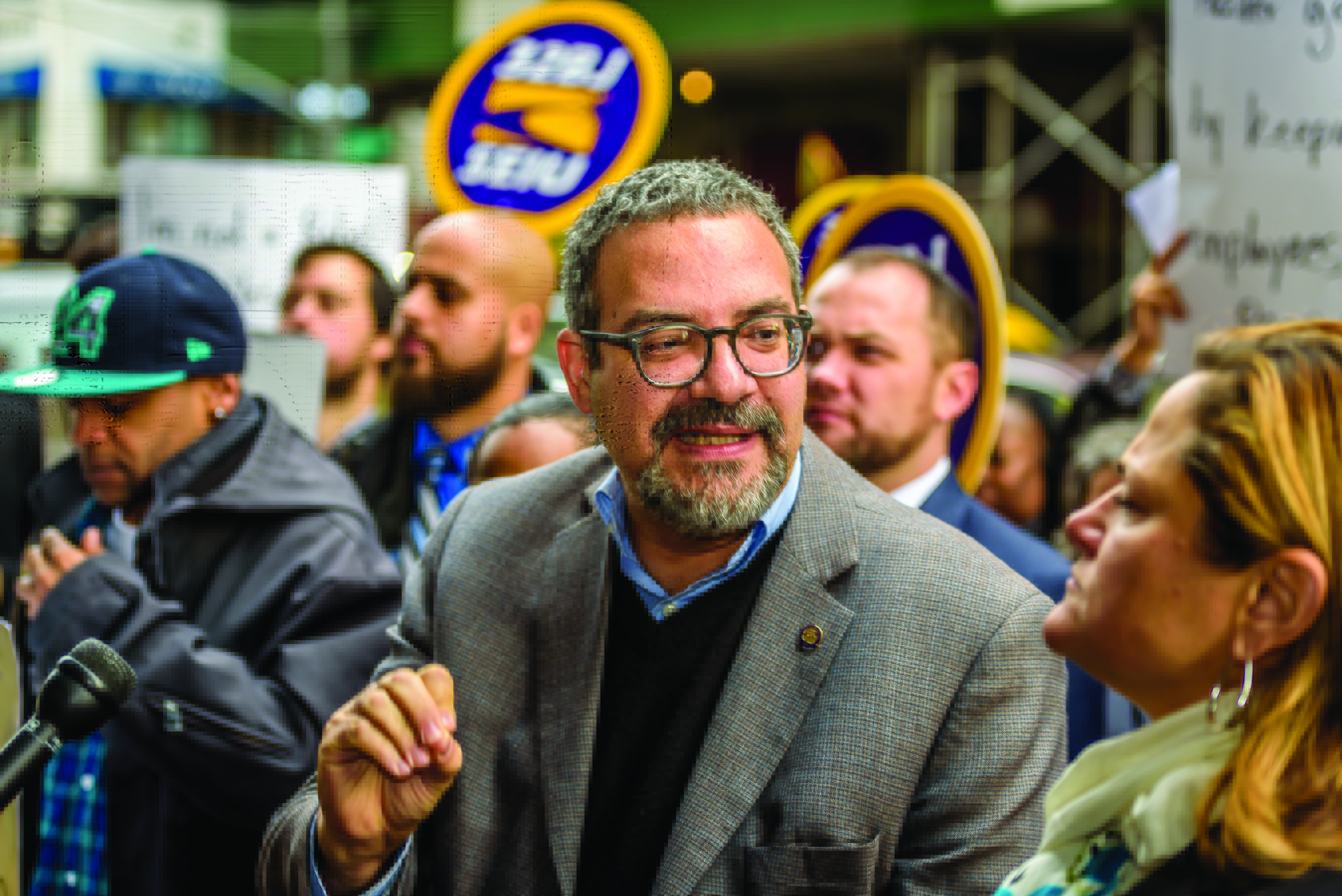 (NEW YORK CITY) - Hector Figueroa - president of one of New York City’s most influential Labor Unions, 32BJ Service Employees International Union (SEIU), and who died of an apparent heart attack Thursday evening (July 11th) at the age of 57, is being remembered as a “towering figure in politics and a hero of the Labor Community who did untold good for the Working People of New York State and this Nation.”

32BJ SEIU is the largest Property Service Union in the country, representing more than 163,000 Window Cleaners, Airport Workers, Superintendents, Doormen, Maintenance Workers, Cleaners, Porters and Security Officers in Washington, D.C. and 11 states including New York, where there are over 80,000 Members.

“It is with overwhelming sadness and a heavy heart that 32BJ mourns the unexpected passing of Union President Hector Figueroa,” according to a statement released by the SEIU. “For those of us who have worked with him to further the well-being of our Members and Working People everywhere, and felt his personal and principled concern for our Members, our Staff and others this is a devastating loss.”

In a statement, Governor Andrew Cuomo said: "I am beyond heartbroken to learn of the sudden passing of Hector Figueroa - a towering figure in politics and a hero of the Labor Community who did untold good for the Working People of this State and this Nation.  Hector was a champion for Working People, minorities, the poor, the voiceless.”

The New York State AFL-CIO called him “a fierce advocate for Working Men and Women.”

Andy Pallotta, President of the 600,000-Member New York State United Teachers (NYSUT) Union released the following statement: “The entire NYSUT Family is deeply saddened to hear of Hector’s passing.  A true champion of the Working Class, Hector fought tirelessly to ensure hard-working New Yorkers were able to achieve a better life for themselves and their families. His work to empower New Yorkers, particularly Immigrant Communities, in the political arena was critical in shaping major debates and ultimately policies.  On behalf of NYSUT Members across New York, I extend my sincerest and deepest condolences to his wife, Deidre - his children, Eric and Elena, the Figueroa family and the entire 32BJ Family.”

“It’s impossible to put into words what Hector meant to the men and women of 32BJ SEIU, to Working People and to the Labor Movement,” New York City Mayor Bill de Blasio said in a statement. “His love of 32BJ SEIU ran deep, but you’d be just as likely to see him on the picket line with Fast Food Workers or Taxi Drivers as you would with the Custodians, Service Workers and Doormen he represented.”

Figueroa moved to the Bronx from Puerto Rico in 1982.

He joined the Amalgamated Clothing and Textile Workers Union, now called Workers United, in 1990 before switching SEIU in 1995.

He worked for the Union’s Justice for Janitors Campaign and served as SEIU Director for Puerto Rico, Deputy Trustee, Secretary-Treasurer and director of 32BJ’s New York Metro District.

He was elected President of Service Workers Union in 2012.

Figueroa was a powerhouse of New York politics and considered one of the most influential political figures in the entire State, where his Members were consistent voters.

During his 24 years at the Union, Figueroa established a Political Action Fund to further SEIU’s agenda.  The Union was a national leader in the fight for a $15 Minimum Wage and helped enact a $19 Minimum Wage for Airport Workers in New York last year.

Figueroa was also an ardent supporter of Immigrant Rights and supported Immigration Reform.

Hours before he died, Figueroa tweeted about President Trump’s efforts to seek citizenship information from existing records instead of using a question on the census: “Trump is about waging war on ALL immigrants regardless of status or contributions to our economy, culture & politics.”

To Directly Access This Labor News Story, Go To: www.nydailynews.com/news/politics/ny-hector-figueroa-32bj-seiu-dead-heart-attack-20190712-extqoracdvedlen4a5tkts5nca-story.html?fbclid=IwAR0dcXL75Gpik1GUZWEQD_9BjvZqxhbcQz80NK7mW8W4rhihFcFSMQeUdf4