Labor Raises The Floor In Nashville - As Construction Booms In An Increasingly Progressive City, Workers Find The Power To Unionize In The Otherwise Non-Union South 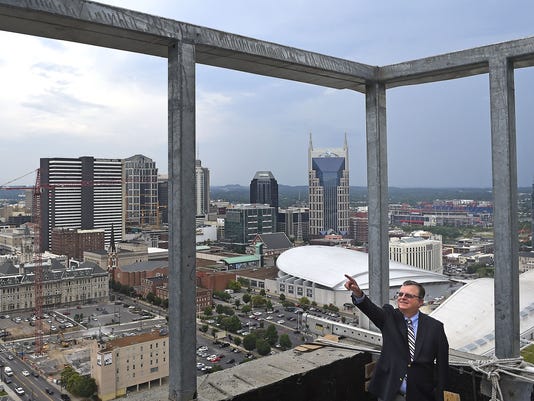 (NASHVILLE, TENNESSEE) - You can’t spend much time in Nashville without someone telling you that 100 people move to the city every day.

The city is growing at a pace similar to that of Seattle or Silicon Valley, and developers are putting up new corporate headquarters, entertainment venues, and luxury hotels as fast as they possibly can.

In fact, construction is intense.

Vibrations from a $1 billion, four-million-square-foot mega-development in Downtown Nashville shook the foundations of the nearby Frist Museum so badly that curators had to box up and ship back an art exhibit on loan from the British Museum before it was damaged.

There were more than 100 hotels in development last year as investors raced to meet the soaring demand from the city’s explosive growth in tourism.

But the glitz and glamor of rapid development has produced more than huge profits for real-estate investors.

It has also resulted in pain and poverty for Construction Workers and, correspondingly, an affordable-housing crisis for Working Class Families.

Like many cities across the country, Nashville’s economic growth comes complete with full-throttle inequality.

But something else is happening on the ground as well: Craft Labor Unions, embracing innovative strategies, are starting to grow, and they’re hoping to turn the tables on corporate power.

They’re using their power in a tight labor market and an increasingly progressive city to boost both Membership and Labor Standards - the kinds of leverage not available to Manufacturing Unions that have tried and failed to Unionize Southern Factories.

Nationally, the Construction Industry has made a full recovery from the 2008 economic collapse.

Revenue in the industry reached a record-setting $2 trillion last year and the share of that revenue going to profits for construction firm owners has continued to steadily climb.

Construction Worker wages, in contrast, have largely remained stagnant, even though employers claim it’s almost impossible to find enough Workers to keep up with demand.

Nowhere is this dynamic more powerful than in the South, which is not only the most populous region of the country, but boasts the highest number of construction firms and the lowest density of Workers in Labor Unions.

“The construction industry in the South is a ‘prime example’ of an industry ‘that has been run down,’” says Nik Theodore, a Professor of Urban Planning at the University of Illinois at Chicago and Co-Author of Build a Better South, a 2017 report that analyzed the working conditions that Construction Workers face in six Southern cities, including Nashville.

“Wages are ‘very low, health and safety concerns are rampant, exposure to heat and other dangers on the job is widespread.’  It is an industry ‘that has failed to keep pace with its own growth,” he said.

Drawing on an in-depth survey of over 1,400 Workers, Build a Better South provides more accurate data on the industry than government statistics, which are hamstrung by loose reporting requirements and an almost non-existent investigation and enforcement system.

It’s no surprise, then, that the report found massive underreporting of injuries, with the actual injury rate in Nashville more than five times higher than the government-reported rate.

To Continue Reading This Labor News Story, Go To:  https://prospect.org/article/labor-raises-floor-nashville