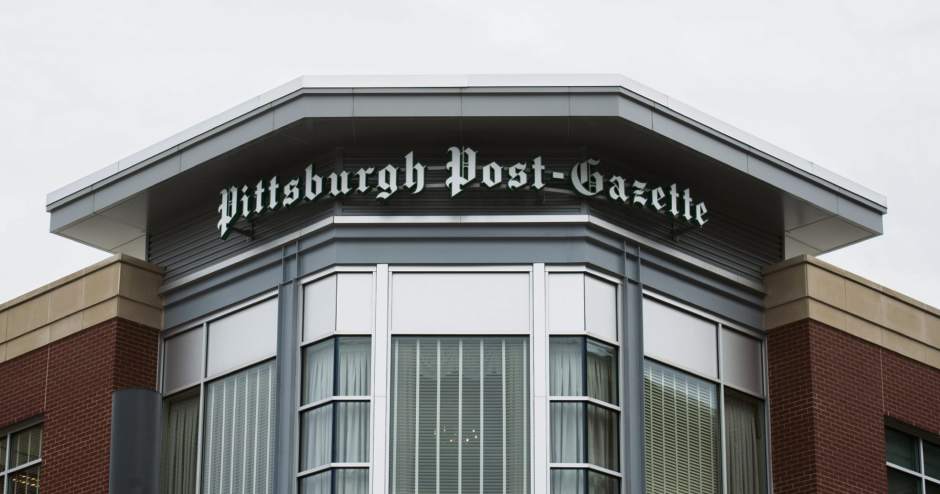 (PITTSBURGH, PENNSYLVANIA) - In April, the Staff of The Pittsburgh Post-Gazette was awarded a Pulitzer Prize for its coverage of the massacre at the Tree of Life Synagogue last October.  The win caught much of the staff by surprise, and, according to a Staff Writer who was there, the office erupted in havoc.

Executive Editor Keith Burris brought out a microphone to deliver some remarks, telling his Staff that this shouldn’t be a day of celebration.

His predecessor, David Shribman, who was in charge of The Post-Gazette when the story broke, followed, leading a moment of silence, and putting the bittersweet honor into further perspective: “There isn’t one of us in this room who wouldn’t exchange the Pulitzer Prize for those eleven lives.”

Notably missing from all of this was the newspaper’s Publisher, John Robinson Block, who, according to Post-Gazette Staffers, hadn’t meaningfully acknowledged the newsroom’s courageous work once, either in public or internally (After the Pulitzer ceremony, he would issue a brief statement saying, in part: “We have always known that the Post-Gazette’s reporting is first-rate.  We did our jobs.”)

Meanwhile, that same week, Susan Allan Block, John’s sister-in-law and fellow Board Member of Block Communications Incorporated (BCI), the privately-held family company that owns the paper, fired off some Islamophobic conspiracy theories about the Notre Dame fire on Facebook.

In most newsrooms, this sort of behavior from the newspaper’s owners would cause an uproar, but the The Post-Gazette, it barely raised an eyebrow, because the paper has been at loggerheads with its bosses for much of the last two years.

Here’s just a shortlist of John Block’s recent offenses: Screaming at Union Employees and allegedly manhandling his daughter in a possibly drunken tirade; Refusing to budge in a contentious contract dispute; Being found to have illegally deprived Union Employees of health care premium increases; and further rattling the newsroom by appointing Burris, the author of a notorious racist editorial, to the position of Executive Editor.

This long list of offenses has been exacerbated by the unveiling of a lifestyle site run by the paper’s marketing department that Staffers fear is dangerously blurring the lines between business and editorial - and is threatening their job security (though the paper’s management has denied this).

It has all added up to a virtual civil war and turned The Post-Gazette into a troubling emblem of the decay of local news outlets across the country.

Several of them were granted anonymity due to their fear of reprisals for speaking out.

Splinter also reached out to both Block and to Burris with a list of detailed questions about the claims put forth by their staff members.

Depending on who you ask, Pittsburgh is either the next Portland, Austin or Silicon Valley, but its journalistic crisis is universal enough to match any market size.

Most of the problems plaguing modern local journalism can be found in Pittsburgh.

To Continue Reading This Labor News Report, Go To: https://splinternews.com/the-brutal-labor-battle-consuming-pittsburghs-biggest-p-1834982996?fbclid=IwAR3W1Ec-kaNofcfnvUeG980QCzJstcXeKA9hOQbIJa5AKrIgDLgj97r-cag