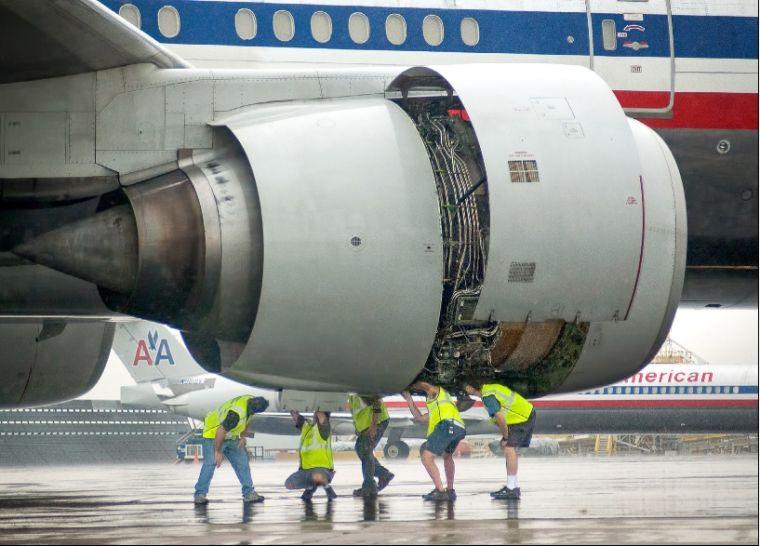 (FORT WORTH, TEXAS) - American Airlines could outsource another 5,000 Unionized Maintenance and Fleet Service Workers, one of the Unions representing those Workers said.

After nearly four years of tense contract negotiations, International Association of Machinists (IAM) Spokesman Joe Tiberi said Fort Worth-based American Airlines is refusing to make commitments to how much maintenance and fleet service work will be done by Company Employees: "They’re looking to ‘significantly reduce the Union Footprint.’  In places like Dallas, ‘they replace Union Labor with lower cost and lower benefit labor, and that impacts the whole community.’"

American Airlines spokesman Joshua Freed didn't deny that Unionized Maintenance and Fleet Service Positions could decrease, but said instead that the airline plans to offer job and location security to current Workers.

Discussions on outsourcing labor came during ongoing contract negotiations as the groups try to merge 31,000 Mechanics, Fleet Service Workers and other Unionized Employees that were part of American Airlines and U.S. Airways when they merged in 2013.

Negotiations are so tense that American Airlines has accused its Mechanics of intentionally slowing down work to create cancellations and delays.

The Unions have denied those charges.

The proposed round of Union job losses won't come through layoffs, but instead through attrition and buyouts to slowly reduce the influence of the organized Workers, Tiberi said.

About 2,200 of those job cuts would be Heavy Maintenance Workers at facilities in Dallas, Tulsa and Charlotte.

Another 1,550 would come from Fleet Service Workers, 950 in Non-Aircraft Maintenance and the rest in Line-Maintenance Workers who repair aircraft at airports across the country.

The Unions have argued for years that Mechanics and other Workers took major concessions during lean years and bankruptcy.

After American Airlines reported a $1.4 billion profit last year, Union Officials say it's time to be more generous to Workers.

With 84% of its workers in Unions, including Pilots and Flight Attendants, Freed said American Airlines isn't trying to diminish any Union.

For now, Tiberi said, Union negotiations have stalled with American Airlines and the two sides have yet to work out wages, benefits and workplace conditions and protections.

The number of Workers and amount of work done by Union Employees are key starting points, he said.

"Our numbers ‘have diminished’ and as American Airlines ‘grows, good jobs deserve to grow with it,’" Tiberi said.

To Read This Labor News Story In Its Entirety, Go To: www.dallasnews.com/business/business/2019/06/26/american-airlines-wants-outsource-another-5000-maintenance-workers-union-claims?fbclid=IwAR3RW7Ayk3M5NjtqzsvH6ZjRBLtUMt4oKKEmLq1Kxou0vO9F2fZhbImL6-M