One New York State Teacher's Extraordinary Gift  Maybe This Will Get People Talking About Being Kinder, Gentler. This Was My Chance To Do Something In My Little Corner Of The World. 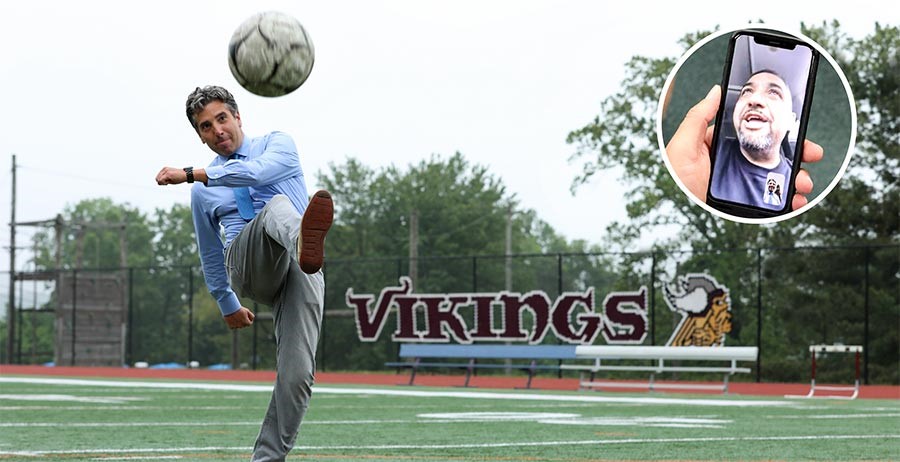 (VALHALLA, NEW YORK) - Ask Sandro Prosperino Why and his emotions rise to the surface, but an explanation does not.

Prosperino talks about his Italian immigrant parents - his “heroes” - who demonstrated through actions, not words, the importance of “selflessness.”

And he mentions that, perhaps, in some way, he was “passing along the same values” to his own children.  “I ‘don’t know,’” said the 49-year-old Educator, who came to America with his family in 1972. “It ‘just didn’t seem far-fetched or crazy.’”

His wife would disagree.

Prosperino acknowledged she struggled with the idea.

Prosperino reassured them, the way a husband and father does, promising that “everything will be just fine.”

But it was the words of his 11-year-old daughter in which he, himself, found assurance.

“Maybe ‘this will get people talking, even beyond kidney donation, about being kinder, gentler,’” Prosperino said. “It just seems ‘we lost our way as a society.’  ‘We seem so much harsher now.’  ‘You go on social media and people are just hammering each other.’  ‘Or something happens in the community and we’re just all over one another.’  ‘Maybe this was my chance to do something in my little corner of the world.’”

One day, he read that New York Mets legend Ed Kranepool was in need of a kidney.  Through his wife, Prosperino had contacts within the Mets organization.  Discussions advanced, physicians were involved and plans for a transplant were tentatively set - then Kranepool found another donor.

“I’m ‘not’ a religious person, ‘but I’ve seen, sometimes, the way the universe intervenes.’  I thought ‘whoever this new person is, they’re meant to get it.’”

Enter Gino Spina, a 47-year-old father of three who had been on dialysis four years.

That Prosperino should donate his kidney to Spina seemed more than fitting.

Not only is Spina also from Italy, he is from the same town as Prosperino’s parents: Calabria.

The two men - now friends who speak regularly - met the day after surgery.

“I walk into his room.  ‘I finally got to put a face to this,’” Prosperino said. “Gino starts telling me ‘his’ story.  ‘One heartbreak after another.’  ‘Then he tries to find the words to express how he’s feeling, and I know he’s not going to find them.’  He ‘starts crying.’  I ‘start crying.’  ‘And I turn around and the entire transplant team is crying.’”

Spina and Prosperino both returned to work about a month after the transplant - weeks ahead of schedule.

To Continue Reading This Labor News Report, Go To: www.nysut.org/news/nysut-united/issues/2019/july-august/one-teachers-extraordinary-gift