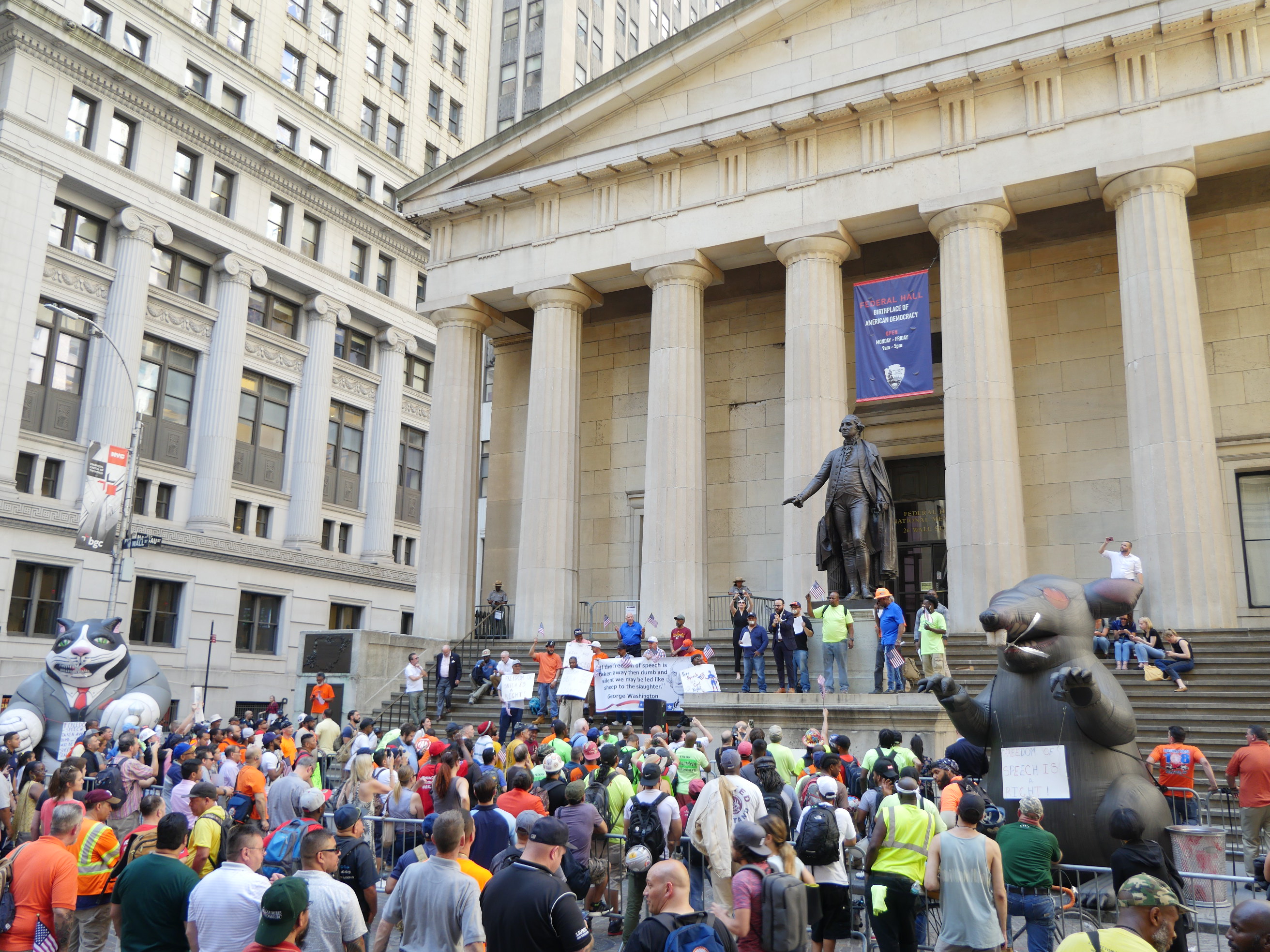 (NEW YORK CITY) - Members of the Unionized Building Trades rallied at the molded feet of President George Washington last week on Wall Street - calling Federal attempts to bar the use of satirical cartoon balloons in a nasty Labor Dispute on Staten Island a brazen assault on the First Amendment Rights of all Americans.

“What the NLRB (National Labor Relations Board) ‘is doing should matter to every single person in this city and every single person across this country,’” said Tamir Rosenblum, an attorney helping to represent Laborers Local 79 in the Staten Island fight. “It is ‘not just a fight about whether we can blow up that balloon or that balloon.’”

New Yorkers are well accustomed to seeing “Scabby The Rat” or one of his cartoonish brethren squatting on sidewalks all over town wherever Unions have a bone to pick with the bosses.

Laborers Local 79 got into trouble on Staten Island last Spring, when the Union started using the time-honored balloons to protest the Non-Union construction of a new Mannix Family Market-owned ShopRite supermarket being built inside a Hylan Boulevard shopping center.

Mannix balked at the Scabby, absolving both ShopRite and themselves of any responsibility over hiring, arguing that Local 79’s beef is really with Kimco Realty Corporation and GTL Construction LLC.

The Staten Island company then filed an Unfair Labor Practices (ULP) Complaint against the Union at the NLRB.

The NLRB, under Trump Appointee General Counsel Peter B. Robb, has since tried to enjoin Local 79’s use of Scabby, but the courts have so far blocked the injunction.

“We show up and we have a balloon,” Rosenblum continued. “We have a balloon ‘and a message.’  ‘And we talk about the fact that when the money doesn’t make it into the Workers’ pockets, it’s not just because of the (general contractor) employing them - it’s a system.’  ‘We get to talk about that - we get to say that.’”

The fight over Scabby The Rat and his pals, nevertheless, continues.

“You ‘think about it - corporations try to hide themselves behind someone else to shrug off their responsibility and say, It’s not me - it’s someone else,’” he said.  “Well, the people that are building that shop in Staten Island – ‘we know that they’re responsible for the irresponsible (hiring) and we’re going to do everything in our power (to fight) - we’re gonna blow up rats.’  ‘We’re gonna protest.’  ‘We’re gonna hand out signs.’”

Local 79 Organizer Bernard Callegari said the American Worker is under attack “and the one thing that we have to defend ourselves is free speech.”

“They ‘want us to be quiet while they steamroll over our families,’” Callegari said. “I ‘don’t know about you, but you’re not gonna shut me up.’”

To Continue Reading This Labor News Story, Go To: http://laborpress.org/unions-warn-efforts-to-deflate-scabby-are-an-attack-on-first-amendment-rights/