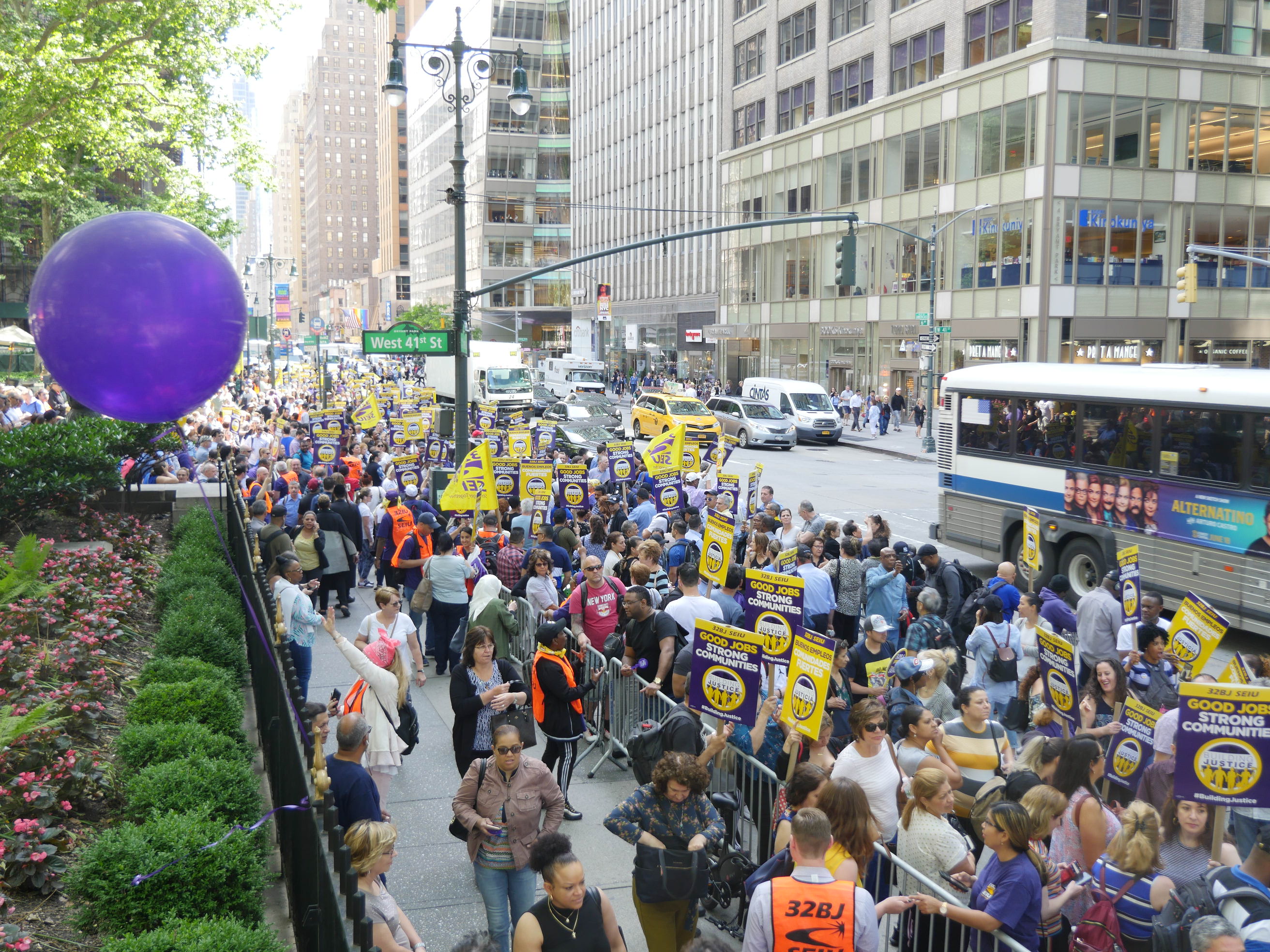 (NEW YORK CITY) - The Union representing Building Service Workers across New York City have put wealthy owners and contractors on notice: We are coming for what we’ve earned and we will Strike to get it.

“The building industry in booming in New York City and we have to start telling the building owners and the contractors that ‘we have done the work, we have earned what we deserve and we are coming for our fair share of the wealth that is here in New York,’” Service Employees International Union (SEIU) 32BJ President Hector Figueroa told scores of Rank and File members rallying outside Bryant Park on Wednesday (June 12th).

The SEIU 32BJ contract covering tens of thousands of Office Cleaners, Maintenance Workers, Security Officers, Doormen, Porters and others doesn’t expire until December, but Figueroa said the fight for a good contract begins “here and now.”

“And when the time comes for the contract to expire - if we don’t have a contract, we will be ready to Strike,” the Union Leader said. “This is ‘about our families, this is about our lives, this is about the dignity of being a Worker in this Union.’”

Two groups of SEIU 32BJ Building Service Workers at a pair of luxury condominiums Downtown are already on Strike.

Denise White, an Office Cleaner for the last 35 years, told LaborPress that owners are squeezing Building Service Workers like her.  “They ‘want more work for less pay,’” White said.

Asha Jackson earns less than $17 an hour working as a Security Officer on 50th Street.  “We ‘need more’ money – ‘that little bit of Minimum Wage is not working,’” Jackson told LaborPress.

Other workers said they are struggling with rising health care costs and building owners who are increasingly hostile to Organized Labor.

“As the skyline changes and you think about the greatness of the city, ‘you cannot only think about owners and people in power,’” New York City Comptroller Scott Stringer told 32BJ Members. “You also have to look at the (25,000) 32BJ Commercial Cleaners and Janitors ‘who work tirelessly and dedicated and deserve a fair contract and fair wages.’”

Wednesday’s demonstration came in conjunction with Justice For Janitors rallies in more than 30 cities nationwide commemorating the June 15th, 1990 protest in Los Angeles in which police beat a group of Janitors fighting for better wages and improved working conditions.

Stinger said the action almost 30 years ago, not only helped secure better wages and benefits and working conditions for Workers back then - but “tens of thousands more today.”

To Continue Reading This Labor News Report, Go To: http://laborpress.org/building-service-workers-ready-to-strike-for-their-fair-share-of-nyc-wealth/