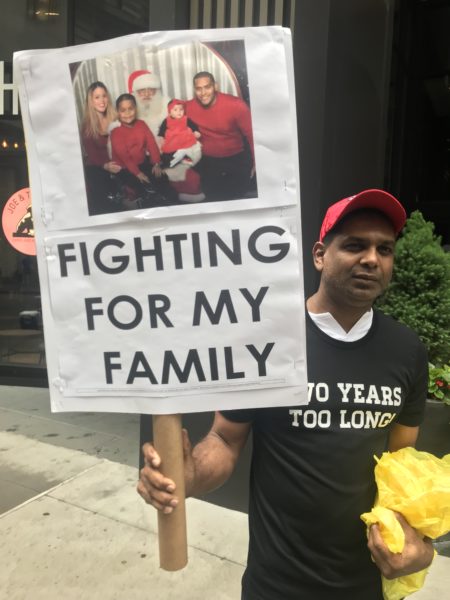 (NEW YORK CITY) – Union-represented Service Workers at two financial-district luxury-condominium buildings went on Strike this week, after almost two years of trying to get their first Union Contract - and they plan to stay out “till we get a contract,” said Naim Likovic, a Night-Shift Concierge at the Setai Wall Street at 40 Broad Street as about 15 Workers and supporters picketed on the sidewalk, chanting: “Two Years, Too Long.”

The nine workers at the Setai and another eight at Be@William at 90 William St. joined 32BJ Service Employees International Union (SEIU) in 2017 and demanded a contract, but the boards of both buildings have so far refused to agree to one.

At Be@William, the board has insisted that it wants to shop around for health insurance plans each year rather than put the Workers into 32BJ’s Health Plan, says Porter Miguel Rodriguez.

Under their current plan, says Concierge Jason Clifton, “guys have been dropped” and didn’t know it “until they go to the doctor and find out they don’t have insurance.”

Workers have received only one pay increase in the 10 years he’s worked there, he adds, and the building’s management won’t match their contributions to their 401(k) plans.

At the Setai, “the last time we got a raise was more than four years ago,” says Morning-Shift Concierge Rauddy Sanchez.

They finally got health insurance last year, two years after it was first promised, says Likovic, who adds that he had to pay $750 a year in tax penalties for not having coverage while he was waiting.

The Industry-Standard Wage at Union Buildings, according to 32BJ, is $24.90, and some Workers at the two buildings on Strike make as little as $18.

Meanwhile, apartments currently for sale at Be@William are advertised from $700,000 to $2.45 million.

To Continue Reading This Labor News Report, Go To: http://laborpress.org/32bj-workers-strike-at-two-downtown-luxury-condos/