This Kansas City Woman Is Training The Next Generation Of Lineworkers 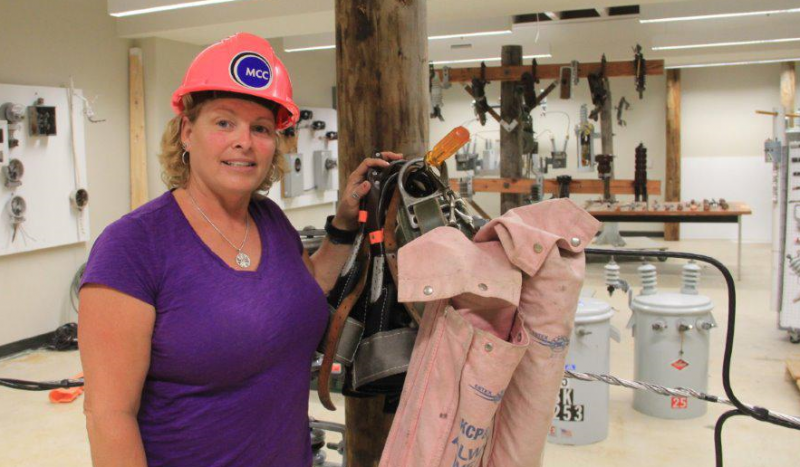 (KANSAS CITY, MISSOURI)- Utility lines emitting enough amperage to easily stop the human heart.  Working on those lines while dangling from the side of a telephone pole 50 feet in the air is a career many people might shy away from, but it’s a job that’s necessary and in demand.

"About (15%) of Lineworkers nationwide will be eligible for retirement within the next three years and ‘they're retiring faster than they're being replaced,’" said Susan Blaser, Lineman Program Coordinator at Kansas City’s Metropolitan Community College's Business & Technology Campus.

Situations like the one in Kansas City over the past few weeks, with winter weather knocking down trees and leaving thousands without power, are when Lineworkers are needed the most.

"It can be ‘pretty brutal’ when you're walking in backyards and there's snow and ice.  ‘There can be wires laying down that are still energized and you can't see it,’" Blaser said. "You're working sixteen-hour shifts ‘and you're not going to get eight hours of sleep.’"

Sleep deprivation is especially dangerous in a Trade where fine motor skills, bodily strength and quick reflexes are necessary.

Still, Blaser said she finds herself motivated more than ever in crisis situations.

"I've been on storms where we got people’s lights on and you walk back out on the property line ‘and the whole neighborhood's clapping,’" Blaser told host Gina Kaufmann on KCUR’s Central Standard. "There's ‘no other feeling like that, when you're doing something rewarding.’"

She was also the first Female Journeyman in the state of Missouri.

She graduated from Apprentice to Journeyman with Kansas City Power & Light in 1992 in a work culture that was very different from today's.

"It was ‘very challenging.’  I came in behind a work group ‘that was still - the husbands worked and the wives stayed at home.’  There ‘weren't a lot of females in line work,’" said Blaser. "There ‘had been thirteen (women) before me who attempted and weren't successful during the program, so they didn't have a lot of trust or (hadn't) had anyone show them that it was possible.’"

But it's more than just possible.

Blaser has seen other Female Lineworkers graduate through the program at MCC and her own daughter is currently working as an Apprentice with a utility company in Illinois.

In a market where the demand for Skilled Trade Workers is higher than ever, there's also a need for more Tradeswomen.

To Directly Access This Labor News Story, Go To: www.kcur.org/post/kansas-city-woman-training-next-generation-lineworkers#stream/0