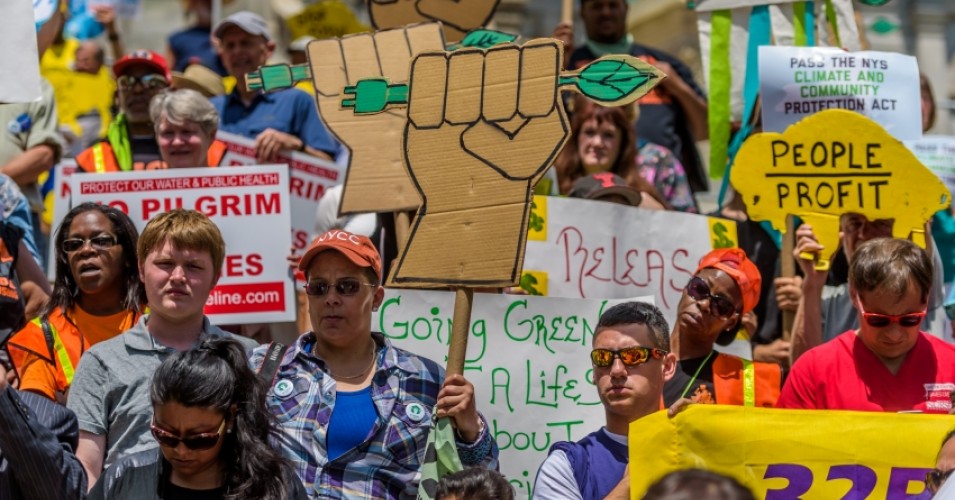 (NEW YORK CITY) - Several years before U.S. Representative Alexandria Ocasio-Cortez (Democrat-New York) elevated the climate, jobs and justice framework to the National level, a coalition of Labor, environmental and community groups joined together to push for a pioneering Climate Bill in New York.

The idea for the legislation came in the immediate aftermath of the 2014 People’s Climate March, when organizers decided to build on the momentum of the historic demonstration.

In 2016, the Climate and Community Protection Act (CCPA) was born, an expansive bill that would require New York to generate half of its electricity from renewable sources by 2030, and eliminate all greenhouse gas emissions by 2050.

The bill would also mandate that 40% of New York’s climate funding go towards projects in low-income, vulnerable communities, and require all Green Projects to have high Labor standards, including the requirement for a Prevailing Wage Rate.

“It’s ‘among the most aggressive de-carbonization proposals in the Nation,’” said Arielle Swernoff, the Communications Coordinator for New York Renews, a coalition of over 170 State groups backing the legislation. “The ‘only State that has really done something comparable is Hawaii.’”

New York Renews offers an encouraging example of how Organized Labor and environmental groups can work together to act on climate change.

It also has the support of a vast number of environmental groups, including the Sierra Club, Environmental Advocates of New York and GreenFaith.

Nella Pineda-Marcon, the Chair of the Climate Justice and Disaster Relief committee with NYSNA, told In These Times that it was an easy decision for her Union to back the CCPA.

Her union, which represents 43,000 Nurses statewide, got very involved with the climate crisis following Hurricane Sandy in 2012.

The following year, Pineda-Marcon traveled to the Philippines as a First-Responder to Typhoon Haiyan: “We are on the front lines of this crisis, we see first-hand the destruction it has.  And the massive amounts of pollutants in our air are driving up rates of chronic asthma in our most vulnerable communities.  We need to lead now and the rest of the world can follow us.”

The politics of the CCPA are coming to a head as the deadline for passage ends June 19th.

The bill passed the state Assembly in 2016, 2017 and 2018 and last year a majority of State Senators signed on in support, but the Senate Leader never allowed it to come to the floor for a vote.

After the 2018 Mid-Terms, however, when Progressive Democrats ousted a group of centrists who often caucused with Republicans, advocates felt the stars were aligning more favorably for the CCPA’s passage this year.

To Continue Reading This Labor News Report, Go To: www.commondreams.org/views/2019/06/10/how-unions-and-climate-organizers-learned-work-together-new-york