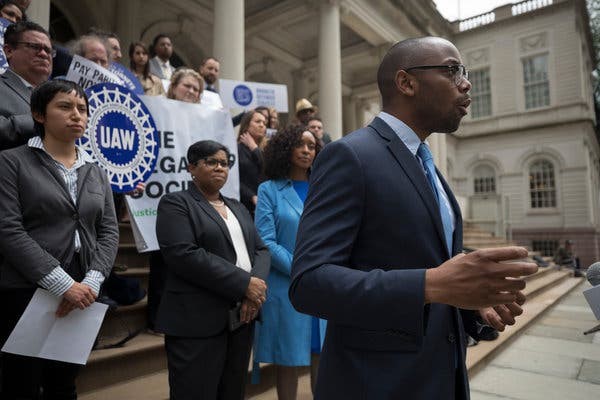 (NEW YORK CITY) - Her story is a familiar one in the Gig Economy Era: She works several odd jobs like delivering food for Grubhub and UberEats, or helping people with their tax returns, but Danielle happens to have a full-time job: She’s a Staff Attorney for the Legal Aid Society in New York City.

The same goes for Julia Boms, a colleague who began working at Legal Aid last year.  On any given day, Boms might be found in an arraignment court, handling a misdemeanor case.  On weekends, she might be tending bar - a past-life job she thought she had left behind.  She is committed to sticking with Legal Aid. “A lot of people are like, ‘In a few years, you’ll go private,’” said Boms, 28. “But I went to school to do this.”

Boms and many of her Legal Aid colleagues are Lawyers by day, representing those who most need, but can least afford, legal services.

Then, out of financial necessity, they become bartenders, dog walkers or Uber drivers by night.

The Legal Aid Society, the Nation’s oldest non-profit legal services organization, offers Law School Graduates starting salaries of $53,582, which increase to $62,730 upon admittance to the bar, according to an internal document.  The overall median salary for First-Year Associates at private law firms in 2017 was $135,000, according to the National Association for Law Placement.

They said they were not seeking private-sector salaries.  Their goal is to reach pay parity with Lawyers in the City’s Law Department, which pays roughly $108,000 to its Lawyers with 10 years of experience.  Legal Aid Attorneys with similar experience earn about $90,000.

At a recent City Council hearing, Legal Aid officials highlighted the pay disparity, and asked Council Leaders - who have proposed giving City-funded legal services organizations an extra $15 million in the 2019-20 budget to help close the pay gap - to boost the increase to $50 million.

“We see this very much not as making sure the Lawyers themselves get paid well for their own sake, but for the sake of their ability to provide the excellent representation to our clients,” said Janet Sabel, the Chief Executive and Attorney-in-Chief of Legal Aid.

“The job is hard because you’re seeing a lot of sadness, a lot of pain.  You’re seeing people kept in cages, you’re seeing clients whose houses are covered in mold, you’re just seeing really, really sad things. We want people to have time off,” she said.

The issue of low pay for public defenders has drawn the attention of U.S. Senator Kamala Harris of California, who is seeking the Democratic nomination for President.

Harris said last month that she would introduce a bill, the Ensuring Quality Access to Legal Defense Act, that would establish pay parity between public defenders and prosecutors across the Nation within five years.