Republican President Trump Promised To Put 'American Truckers First,' But Drivers Now Say He Hasn't Delivered - Truckers Say Trump Tax Plan Is Hurting Their Wallets & That Administration Is 'Not Listening At All' 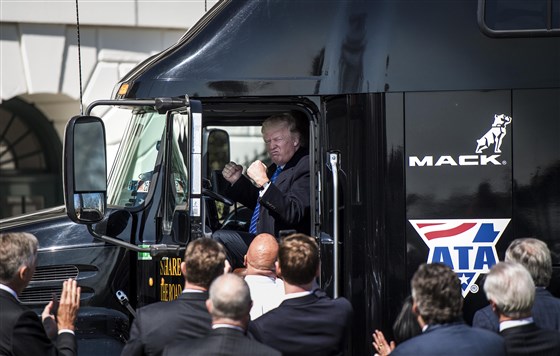 (JACKSON, GEORGIA) – Republican President Donald Trump pitched his economic agenda as a win for Truckers, but so far, some Drivers say they haven't seen proof Trump is with them for the long haul.

"America first means putting American Truckers first," Trump said at an October 2017 event in Pennsylvania, where he touted the GOP Tax Bill ahead of its passage.

Earlier that year, he climbed into the cab of a big rig on the White House lawn and sounded the horn.

But a number of Truck Drivers, in interviews with NBC News, said that same tax bill is hurting their wallets.

Before the new tax law went into effect, Truckers were able to deduct daily expenses like food and lodging from their taxable income.  Now, many have lost that ability, thanks to the bill's elimination of a category of deductions that allowed Employees of a company to deduct work expenses that the company did not reimburse.

“I've seen an ($8,000) ‘increase’ in my taxes this year,” Trucker Richard Robinson said in an interview with NBC News. "I have a young family at home and we ‘didn't meet the threshold to pay anything with our earning income credits and all.’  And with our per diem,’ they took the per diem out.’  The government says ‘we can't have per diem anymore.’  ‘That made an ($8,000) difference in my taxes.’”

Robinson is part of a group called Black Smoke Matters, a loose coalition of Long-Haul Truckers hoping to get the White House's attention on issues that pertain to Truckers.

Including Robinson, NBC News spoke to eight members of the group at a barbecue stand popular with Drivers in Georgia.

Named for the color of the exhaust that used to come out of big rigs, the group formed in response to a range of policies they say favor big fleets over Independent Drivers.

Although the name is a play on Black Lives Matter - the activist movement that ignited following the killing of unarmed Black teen Michael Brown Jr. in Ferguson, Missouri - the group leaders say it's not meant as a critique of that movement.

For many, the tax law changes compound problems that date back to well before the Trump Administration, including issues like State Fuel Taxes, hours-of-service requirements and new rules that require electronic logging device of their miles and hours driven.

"Last year I owned ten trucks, ten trailers.  This year I own ‘one’ truck, ‘one’ trailer ‘because of all the taxation, the over-regulation,’" Long-Haul Trucker Greg Anderson said. “I'm ‘actually considering getting out of trucking, period.’”

Billy Bogar has been a Long-Haul Trucker for nearly 20 years.  He says that he’s a Conservative who was glad when Trump won, but that he believes Trump is listening to the wrong people.  “I'm a ‘die-hard’ Republican.  ‘I always have been.’  ‘I liked the approach that he had to Washington.’  ‘I liked the approach of going and fire everybody and start over,’” Bogar said.

But the problem, as he sees it, is with large fleet owners represented by groups like the American Trucking Associations, which he feels is pushing out Independent Truckers like him.

For Bogar, Trump’s moment with an 18-wheeler on the White House lawn struck a less than positive note: “The fact that he comes out and ‘honks the horn for’ ATA ‘and not’ the American Truck Drivers – ‘boots on the ground right in front of you’ – ‘that’s a little disturbing for sure.’”

To Continue Reading This Labor News Story, Go To: www.nbcnews.com/politics/donald-trump/trump-promised-put-american-truckers-first-drivers-say-he-hasn-n1014111?fbclid=IwAR3i9uHK9FtGXY55vAv3sjvZx4vPRwGmThOsQlf254rSo-4_TjC3nztB-38