Published Thursday, June 6, 2019
by The New York Times Editorial Board 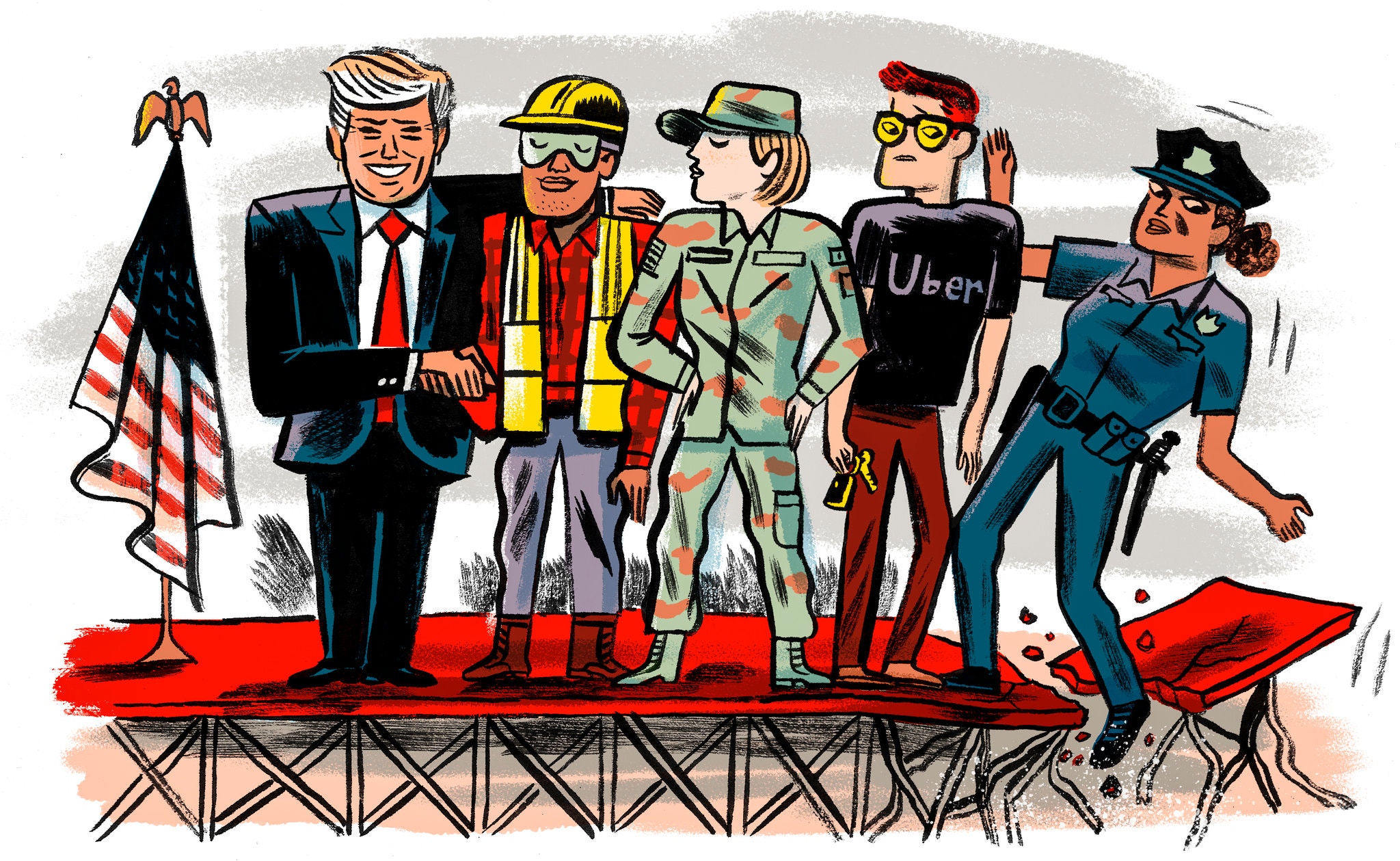 Republican President Donald Trump ran for office as a champion of American Workers and a friend of Labor Unions, but his administration has systematically favored employers at the expense of Workers.

It is asking the Supreme Court to rule that companies can fire Workers on the basis of sexual orientation.

The number of Workplace Safety Inspectors employed by the Occupational Safety and Health Administration (OSHA) has fallen to the lowest level in the agency’s half-century of operation.

And as the administration has pulled back from protecting the rights, safety and economic welfare of Workers, it has sought to undermine State Regulators and to prevent Workers from protecting their own interest through collective bargaining.

Trump said during the 2016 campaign that he supported a $10 Federal Minimum Hourly Wage, but since taking office he hasn’t sought any increase in the Minimum Wage, currently $7.25 an hour.  Instead, his administration has tried to limit Worker pay.

In April, the Labor Department ruled that Workers for an unidentified cleaning company, and for similar businesses, were contractors rather than Employees and therefore not entitled to be paid a Minimum Wage or overtime or to have the company pay a portion of their Social Security taxes.

The administration has retreated from an Obama-era effort to expand eligibility for overtime pay.  Most full-time, salaried Workers who earn less than a Federally-defined ceiling are eligible for overtime.  In the 1970s, more than 60% of Workers qualified, but because Congress failed to adjust the threshold for inflation, the share of eligible Workers fell to 7% by 2016.  The Obama Administration rehabilitated the rule by raising the salary line to roughly $47,500 and by mandating inflation adjustments, but a Federal Judge in Texas blocked implementation, and the Trump Administration declined to defend the rule.  Instead, in March it proposed a new threshold of $35,300.  The administration estimates the increase from the current ceiling of about $23,700 would benefit about a million Workers, while the Obama rule would have benefited more than four million.  And the proposed rule does not include automatic inflation adjustments - so the benefits of the increase once again would gradually fade away, in effect delivering a windfall to employers.

The U.S. Labor Department began a program in 2018 allowing employers to report their own violations of Federal Wage Laws and to avoid penalties by paying Workers the money they are owed.  The administration has not made a convincing case that clemency for delinquent companies will produce better results than punishing them.  While some employers may be encouraged to acknowledge wrongdoing, others may conclude they can take an interest-free loan by underpaying Workers now - and making amends later.  The program also makes no effort to coordinate with State Regulators to determine whether Workers are entitled to additional compensation under State Law - a likely circumstance given that 29 States require employers to pay a higher Minimum Wage than the Federal standard.

And the administration is siding with employers in a set of cases that the Supreme Court has agreed to hear regarding the rights of Gay and Transgender Workers.  Though the Equal Employment Opportunity Commission (EEOC) has said that Federal Law bars discrimination on the basis of sexual orientation, the administration has taken the opposite view, arguing that existing protections on the basis of sex do not extend to sexual orientation.

Trump has demonstrated his support for such discrimination by barring Transgender individuals from military service.

The Federal Government has displaced Unions as the primary protector of the rights and safety of American Workers, but Trump is also moving to limit the power of Unions - which still serve millions of Workers - and to limit opportunities for Workers to join or create them.

Last month, the National Labor Relations Board (NLRB) decided that it did not have jurisdiction over Labor complaints by Uber Drivers, because those Workers are contractors rather than Employees.  That decision means the government will not enforce standard protections for Unionization Drives at Uber or other companies with similar business models.

I clicked-on to the link to 'learn even more' about the 'progressive Anti-Worker' actions of the 'orange-skinned' billionaire, his 'supporting' GOP 'minions,' Corporate CEOs and - 'unfortunately, a certain percentage of Union Members.''Sad as it may be, November 2020 will - in the end, be victorious, as we all work to unseat this con-artist .' Posted by Dan Boody on June 7, 2019 at 7:02 am