A Labor History Lesson: When & Why Did Unions Start Signing Contracts? 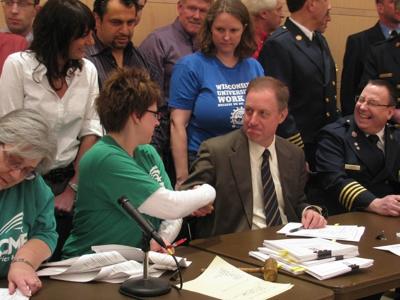 Organizing.Work Editor’s Note: Robin J. Cartwright explores the historical origins of “Workplace Contractualism” in the United States - the predominant model of Unionism, whereby Workers and employers negotiate a contract.  He notes employers themselves pushed for the contract system in order to tame Unions and to engage Union Officers and Leaders in suppressing Worker Strikes.

In 1911 Bill Haywood complained that the A. F. of L. couldn’t have a General Strike if they wanted to… They have 271,000 different agreements that expire 27,000 different minutes of the year.  They will either have to break all of those sacred contracts or there is no such thing as a General Strike in that so-called Labor Organization.

Today, Labor Relations Professionals take it for granted that Unions seek to sign contracts with employers, but in Haywood’s day this was a relatively new and controversial practice, one that started when he was a teenager.

Contracts were originally invented by Labor Unions that believed they needed to give National Leaders authority to restrain strikes and militancy, which could bankrupt the Union or subject it to state violence.

As Labor Unrest increased, employers looked for new methods to control their workforce and undermine strikes, eventually choosing to work with and co-opt moderate Labor Leaders and use their authority over Union Members to discipline the workforce.

Over several decades, employers and Union Leaders experimented with a series of contracts, gradually developing a Workplace Contractualism that served both groups.

Prior to the rise of contracts, Unions practiced a variety of other methods to interact with management.

During the Lowell Textile Strikes of 1834 and 1836, among the first factory strikes in the United States, the Workers made no attempt to get management to sign a Collective Bargaining Agreement.

The strikes were waged in response to a wage cut in 1834 and an increase in the price of room and board in company boardinghouses in 1836.

In 1834, the Workers, nearly all of whom were young women, organized mass meetings and signed petitions against the cuts, pledging to refuse to work if they were not rescinded, and imposing penalties on any Worker who broke her pledge.

Although the 1834 Strike was defeated, the 1836 Strike was better organized and succeeded in reversing the price increase - without signing a contract and with little in the way of Labor-management meetings and negotiation.

Nineteenth-century Craft Unions, with a mostly male membership, often attempted to unilaterally impose their preferred wages and working conditions on employers without signing a written agreement, or even negotiating.

Typically, Union Members would meet and vote on what they called “legislation” (i.e. Union Work Rules).

This legislation set wages, working hours, break times, days off, terms of Apprenticeship and specifics of how work was to be done (such as the size of work crews, how many machines could be run at once, and how many products would be produced per hour).

Union Members were obliged to refuse any order which conflicted with this legislation and refuse to work at any company that did not abide by it.

These Craft Unions organized skilled occupations that required extensive training - making it difficult for management to replace any Worker.

If a sufficient portion of the limited pool of Skilled Workers refused to work for any employer that did not abide by Union Legislation, they could compel employers to abide by the Union’s terms.

For this strategy to work, the Union had to ensure that the number of Workers who were trained in their craft remained limited, and many Craft Unions attempted to do this by restricting the number of new Apprentices taken on, and by keeping Women, People of Color, Immigrants, and/or the Irish out of their trade.

To Continue Reading This Labor News Report, Go To: http://organizing.work/2018/10/when-and-why-did-unions-start-signing-contracts/?fbclid=IwAR2O4dv9tI5iIpHoqu2qtiFgxNQEE04tz02mV5czB5-1vhGgk44HTim-pLE