Teacher Salaries Fell 4.5% Over The Last Decade - The Gender Gap Contributes To Disparities In Pay Between Teachers & Similarly Educated Professionals 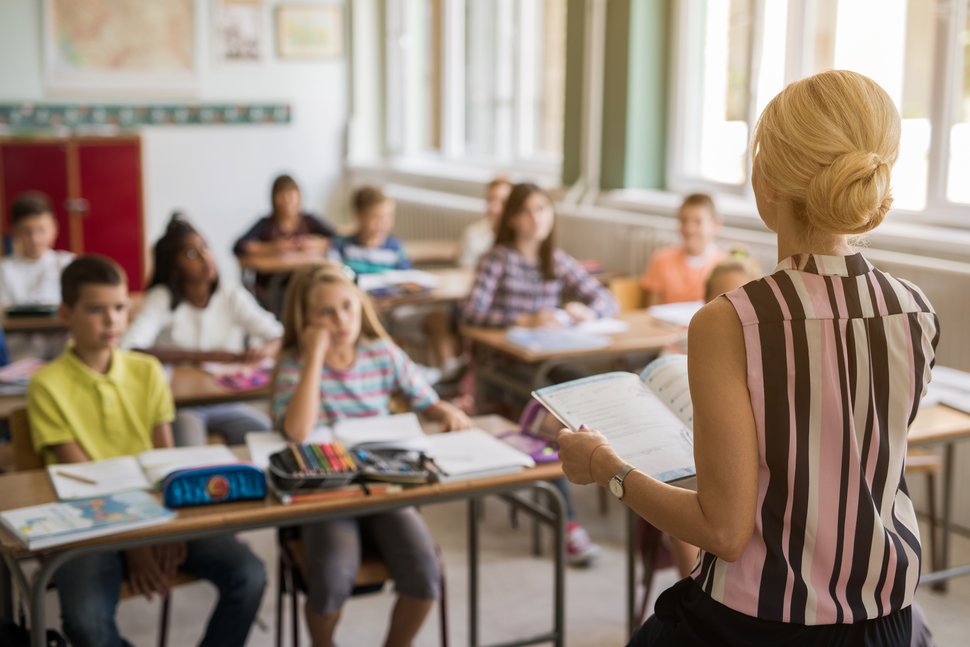 (WASHINGTON, D.C.) - When Lily Eskelsen García, the President of the 3.2-million Member National Education Association (NEA), attended the State of the Union address earlier this year as a guest of House Speaker Nancy Pelosi, she had an unexpected encounter at a reception after the speech.  A waitress for the company catering the reception approached the head of the powerful Teachers Union, who was looking to put down an empty glass.  "Lily," the Waitress said. "I'm so happy to meet you."

They struck up a conversation and Eskelsen García soon learned that the Waitress' name was Evelyn Fabito, a Media Specialist at Dodge Park Elementary School in Maryland's Prince George's County.  Fabito had been an Educator for more than 20 years and was a long-time and active Member of Eskelsen Garcia's Union.  "So, this is your second job?," Eskelsen García asked.  "No," Fabito said. "This is my third.  I have another on weekends."

The plight of the Teaching profession is a narrative that's made headlines over the last two years as Educators have become more vocal about the state of their profession, including how their low pay stands in stark contrast to the high expectations placed on them.

They've walked out of classrooms in protest, rallied at State Capitols and gone on Strike in nearly a dozen jurisdictions to demand higher pay, smaller class sizes and increased state investment in their K-through-12 Systems.

"When you see the ‘pay gap, you can see the gender gap, you can see the respect gap,’" Eskelsen García said on a recent call with reporters, during which she detailed her chance meeting with Fabito. "The numbers ‘speak for themselves.’  ‘You can see that Our Teacher Pay over the last decade has continued to erode.’"

The average Public School Teacher Salary in the U.S. for the 2017-18 school year was $60,477, according to the NEA's annual report, but State averages varied greatly - from more than $80,000 in States like New York, California and Massachusetts to less than $47,000 in Mississippi, West Virginia and Oklahoma.

The average starting salary for the 2017-18 school year was $39,249, a 3% decrease over the last decade, after adjusting for inflation.

Moreover, 63% of public school districts still offer a starting salary below $40,000, according to the report, and nearly 300 school districts pay First-Year Teachers less than $30,000 a year.

"When we go into colleges of education and ask them why they've seen a drop in the number of people applying to Teacher Colleges, ‘they keep saying that these are prospective Teachers who have to look at the pay they are going to receive as new Teachers.’  And they are saying, 'We won't be able to pay off our student loans for that,'" Eskelsen García said. "People who want to be Teachers are going into other professions ‘because of the pay gap.’"

According to the Economic Policy Institute (EPI), a Left-leaning Policy Organization, Teachers are paid 21% less than similarly educated and experienced professionals.

The so-called "Teacher Pay Gap" reached an all-time high in 2018, the Institute's experts have said, exacerbated by the gender gap in wages.

Women earn about 80% of Men's salaries across the spectrum of full-time jobs, and historically, teaching has been a profession made up mostly of Women.

Today, 77% of educators are Women.

To Continue Reading This Labor News Report, Go To: https://www.usnews.com/news/education-news/articles/2019-04-29/teacher-salaries-fell-45-over-the-last-decade?fbclid=IwAR0SVLO5gA4mxwFmxKbUWf9snhqxgczxSQ8Rx-o8tDoYk9y3tVFZ1Stj51E