The Huffington Post Reports Someone In The Airlines Operations Control Center Feared Attendants Might Walk Off The Plane After Working Long Hours, So They Ordered The Door Closed 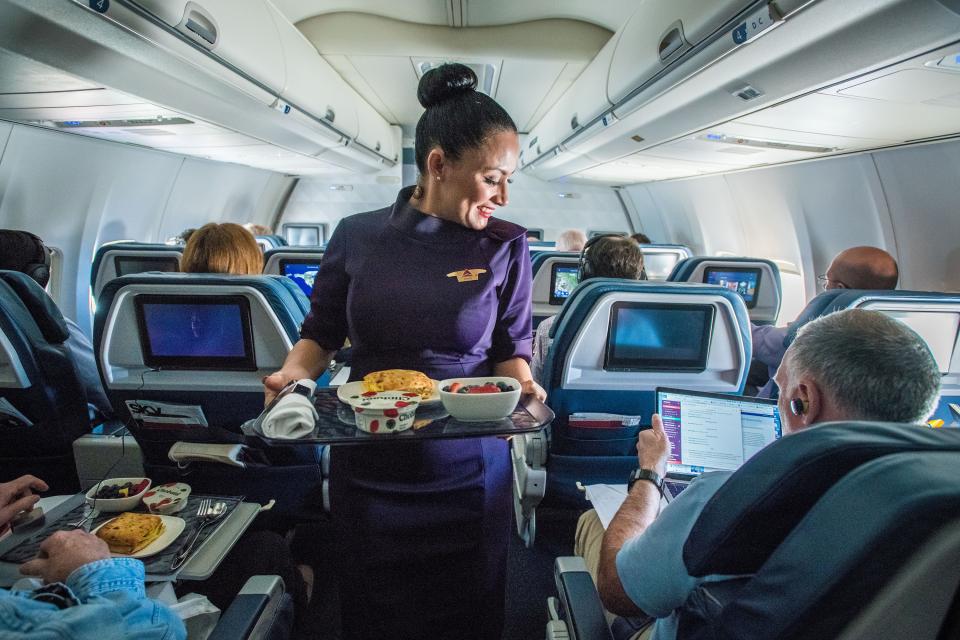 (ATLANTA, GEORGIA) - A recent Delta flight leaving Atlanta ran into a maintenance problem, causing a lengthy delay before takeoff.  As the airline tried to resolve the issue, someone feared the holdup might cause an even bigger headache: Flight Attendants walking off the plane because they had worked so long.  So, according to internal communications reviewed by HuffPost, an employee in Delta’s Operations Control Center sent a directive to the Delta Gate Agent handling the flight: “Do not open door,” the message read - “flt attendants out of time and none available.”  The Employee advised the Gate Agent to “let (maintenance) do their work without opening door thanks.”

Whoever sent the message seems to have been worried that the Flight Attendants would soon hit their maximum duty hours - the most they can be required to work continuously without a break. And that, tired and annoyed, they would walk off the plane, forcing the airline to scramble to find another crew, or cancel the flight.

Generally, once an Attendant hits the maximum hours for a series of flights, they can’t be forced to continue on the next segment, although they would get extra pay if they do.

It isn’t clear whether these Attendants would have had the option of leaving the plane in this particular situation, but someone in operations control apparently believed they did.

The message above went out at 10:19 p.m.  About a half-hour later, the operations center sent an even more urgent note: “Ok… if door is not closed by (11 p.m.) Flt attendants walking.  We will most likely have to delay flight until morning if this happens.”

Someone in the flight tower responded, “Copy.”

The correspondence suggests the flight in question was Delta 1990, going from Atlanta to Toronto, on May 12th.

Flight history from the airline tracking site FlightAware.com shows the flight left nearly three and a half hours after it was scheduled to, at 11:27 p.m.

But the correspondence makes clear that the Flight Attendants understood what was going on and weren’t happy about it.

An Attendant listed as “Flight Leader” said they knew the operations team was trying to “trap” them on the plane, although the Attendants were staying to work voluntarily: “Since we are deciding to stay although y’all are trying to trap us on the plane, and now our layover has been shortened and we will be past our duty day, hungry and tired.  It would be nice to have a deadhead at some point tomorrow.”

A “deadhead” is when a Flight Attendant or Pilot flies a leg as a passenger and gets paid but isn’t working.

“We are ready to walk literally,” the Attendant followed up in another message. “Doing the operation a huge favor.”

Delta acknowledged the Flight 1990 incident in a statement to HuffPost, saying it was a breakdown of company protocol.

The incident shines a light on the rough hours many Flight Attendants have to work and how airlines tighten up their staffing to keep costs down.

Delta was obviously reluctant to bring in another crew to staff the plane, even though the Attendants onboard might be overworked.

Flight Attendant Duty Hours are often laid out in a Union Contract, but Delta Flight Attendants are not Unionized, although the International Association of Machinists and Aerospace Workers (IAMAW) is trying to organize them, as well as the company’s Ramp Agents.

To Read This Labor News Story In Its Entirety, Go To: www.huffpost.com/entry/delta-trap-flight-attendants-plane_n_5cf28bd5e4b0a1997b6b198c?tst&guccounter=1&guce_referrer=aHR0cHM6Ly93d3cuZmFjZWJvb2suY29tLw&guce_referrer_sig=AQAAAAT-gkWxAASWyeQw_mu54Qql2Cg5Gyhlp4V6GBcMr7d0cXpSiJm0jbk7E9yKlJmnotJgn04Sg1s3eOpbLiWoI7zceVbQBo9xT4fbIcoHfkQfTuXTBzR1lV2pDSE5e4ZJRqvI2y590KvqdOJXM_lmTkd9TkeV4kKHhjV751unnryd