Jerry Wurf: The Man Who Put Public Employee Unions On The Map 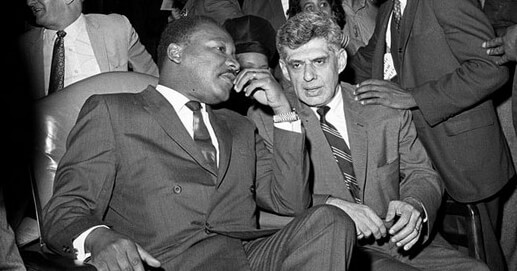 The Prospect Editor’s Note: In May, Organized Labor celebrated what would have been the 100th birthday of Jerry Wurf, who turned the American Federation of State, County & Municipal Employees (AFSCME) into a powerhouse and a champion of equal rights.  Pictured above: then AFSCME President Jerry Wurf sitting next to the Reverend Martin Luther King, Jr. (AFSCME Photo)

(MEMPHIS, TENNESSEE) - In early 1968, the Reverend Martin Luther King, Jr. flew to Memphis three times to support African-American Sanitation Workers who had gone on Strike not only to protest unsafe conditions, abusive White Supervisors and low wages, but also to gain recognition for their Union.

“One day our society will come to respect the Sanitation Worker if it is to survive,” King said in his March 18th speech to an overflow crowd of 15,000 people at a Memphis church.

“If Americans don’t offer that respect, King continued, they “are reminding not only Memphis, but the Nation that it is a crime for people to live in this rich country and receive starvation wages.”

On the platform with King that night was Jerry Wurf, the President of the American Federation of State, County, and Municipal Employees (AFSCME), the Union that, in coalition with the NAACP and local Black Ministers, had organized the workers and invited King to Memphis.

In his deep, rumbling voice, Wurf - a long-time Civil Rights Activist, talked about the injustices shared by Blacks and Workers, then turned to King and said: “We know, Brother, we’ve been the same places.”

When a local Black Minister rose to speak, he pointed to Wurf and said: “This man’s skin is white, but he is a Brother.”

And that they should not have to give up their hopes, or their rights, just because they worked for government.

As AFSCME’s President, Wurf was the Labor Movement’s most important leader in organizing Public Employees, who’d been largely unorganized until the 1960s.

Through aggressive organizing and skillful bargaining, his Union grew from 220,000 Members in 1964, when Wurf was elected its President, to over one million Members at the time of his death in 1981.

The upsurge in Public-Sector Unionizing in the 1960s and 1970s resembled the breakthrough of Industrial Unionism in the 1930s.

Membership in Public Sector Unions, led by AFSCME (which became the Nation’s fast-growing Union, thanks in part to the publicity from its efforts in Memphis), as well as by the American Federation of Teachers (AFT) and the National Education Association (NEA), grew tenfold between 1955 and 1975, topping four million by the early 70s and doubling to eight million by 2010.

Along with AFT president Albert Shanker, Wurf was a key figure in enabling Government Employees to win, and exercise, Collective Bargaining Rights.

This dramatic growth in Public-Sector Unionism occurred at a time when overall Union Membership was falling.

Today, Government Employees make up almost half (49%) of the 14.7 million Union Members in the United States.

More than one-third of Government Employees are Union Members, compared with only 6.4% of Private Sector Workers, according to the Bureau of Labor Statistics (BLS).

As Historian Joseph McCartin observed: “By default, Public Sector Unions have become the single most effective social force capable of speaking out for a just economy.”

Wurf’s path-breaking success in organizing Government Workers in the 1960s and 1970s is what has kept the Labor Movement alive today.

To Continue Reading This Labor News Report, Go To: https://prospect.org/article/man-who-put-public-employee-unions-on-map