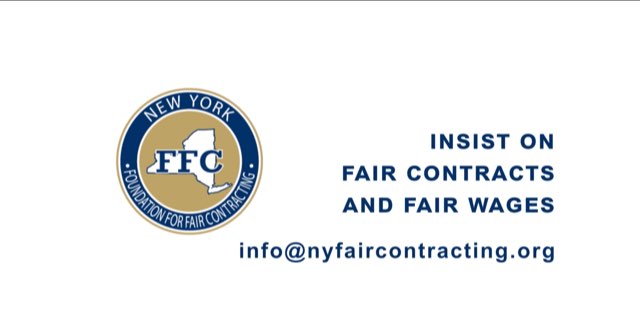 (BUFFALO, NEW YORK) - The New York Foundation for Fair Contracting (NYFFC) is applauding Erie County for enforcing its Lowest Responsible Bidder Law by deciding not to award the reconstruction of Lake Avenue project to Zoladz Construction.

The NYFFC appreciates the swift action taken by Erie County Leaders to address serious allegations that Zoladz falsely presented itself as a Service-Disabled Veteran-Owned Small Business to improperly obtain millions of dollars in Federal Contracts.

In just the past three years, two Zoladz Workers lost their lives on the job.

The U.S. Occupational Safety & Health Administration (OSHA) fined Zoladz more than $50,000 for serious violations identified after these Workplace Deaths in 2016 and 2018.

OSHA only considers a violation to be serious “when the workplace hazard could cause an accident or illness that would most likely result in death or serious physical harm.”

To the NYFFC’s understanding, this is the first instance of Erie County using its Lawful Responsible Bidder Authority.

This enforcement ensures responsible contractors who abide by the law and deliver a high-quality product have a fair shot at Public Works Contracts, said the NYFFC, which released the following statement: Erie County has reaffirmed its Statewide Leadership in government contracting accountability.  The NYFFC encourages other municipalities across the State to look to Erie County’s example and only give hard-earned taxpayer dollars to the lowest responsible bidders.

The NYFFC is a Watchdog Non-Profit established to level the playing field in Public Works Construction for the benefit of taxpayers, responsible contractors and Workers.

For More On This Labor News Story, Read the May 6th Report, Headlined: New York Foundation For Fair Contracting ‘Applauds’ Erie County Legislature For Postponing Local Reconstruction Award To Zoladz Construction - Which Was Fined By OSHA For An On-The-Job Death Of An Employee at www.wnylabortoday.com/news/2019/05/06/buffalo-and-western-new-york-labor-news/new-york-foundation-for-fair-contracting-applauds-erie-county-legislature-for-postponing-local-reconstruction-award-to-zoladz-construction-which-was-fined-by-osha-for-an-on-the-job-death-of-an-employee/