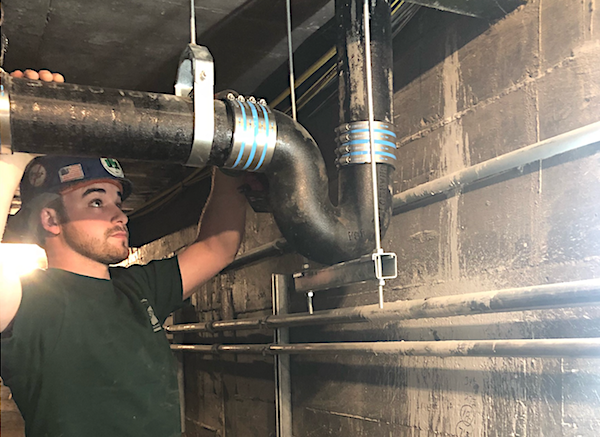 (RALEIGH, NORTH CAROLINA) - Childhood dreams of working as an actress or marine biologist did not prepare Tatiana Douglas for her current career path.

The young Brooklyn native is a Cloud Computing Apprentice in Raleigh, North Carolina, where she learns by watching training videos, conversing with mentors and tackling team programming challenges with the other members of her cohort.

An Apprenticeship provides paid skills instruction and on-the-job training to prepare job seekers for careers and Apprenticeships culminate in portable credentials.  "If you had told me at age 12 I would be at IBM at age 20, I would have said, 'You're lying,'" Douglas says.

After graduating from Pathways in Technology Early College High School with both a high school diploma and an Associate Degree in software Engineering, Douglas considered seeking a Bachelor's Degree in Computer Science, but when she learned about Apprenticeship opportunities at IBM, she applied, intrigued.

Ultimately, finances were the deciding factor.

"I went to my college orientation, but something told me IBM ‘was the way to go,’" she says.

Douglas' decision highlights one of the big benefits Apprenticeships offer to job seekers in an era of soaring tuition costs.

An Apprenticeship provides paid skills instruction and on-the-job training to Workers, culminating in a portable credential that makes them attractive to employers.

The average starting wage for Apprentices is $15, according to the U.S. Department of Labor.

And now, Apprenticeship Programs are expanding beyond their roots in the Building Trades.

More than 150,000 businesses in industries like technology and health care have adopted them, the U.S. Department of Labor also reports.

Skilled Trades Professions have long used Apprenticeship Programs to prepare people for careers in fields such as Bricklaying, Plumbing and Steamfitting, which is the work of fabricating, installing and maintaining piping systems.

In addition to working 40 hours a week on job sites, new Apprentices attend class on Monday and Wednesday nights and all day on Saturday.

"The beauty of it - and one of the best-kept secrets about Building Trade Labor Unions – is they don't pay for their schooling whatsoever," says Daniel Loveless, Business Manager for Steamfitters Local 602. "When they come out, they're making ($90,000) with no student debt."

Many of the Apprentices are young, but not all - the average age is 24.  Some sign up right after high school, while others come to the program after finishing their military careers.

In fact, one current Apprentice has an MBA from Brown University.

To Continue Reading This Labor News Report, Go To: https://money.usnews.com/careers/applying-for-a-job/articles/for-affordable-job-training-consider-modern-apprenticeships