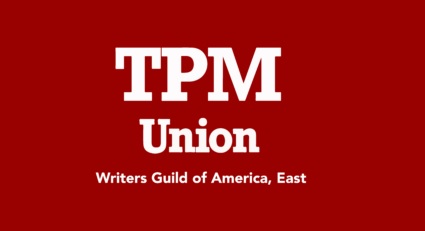 On May 10, 2018, TPM’s Editorial Staff unanimously signed a letter expressing their intent to join the WGAE and Talking Points Memo Publisher Josh Marshall immediately recognized their Union.  Established in 2000, Talking Points Memo (TPM) was the first Digital-Native News Organization to win the George Polk Award for Journalism.  The site’s 11-Member Bargaining Unit covers a wide-range of politics, policy and national news, and works out of offices in New York City and Washington, D.C.

“We are happy to have this contract ratified and appreciative of management’s good faith negotiation throughout this process.  We believe this contract will strengthen our workplace and we’re excited to keep producing great journalism,” the TPM Bargaining Committee said.

Writers Guild of America, East Executive Director Lowell Peterson said: “TPM has a history of reporting on Labor Rights and this Collective Bargaining Agreement demonstrates that they are ‘willing to walk-the-walk and address the concerns raised by’ Guild-represented Employees at the bargaining table.  ‘We hope more newsrooms will see the example set by TPM and organize for a more just and equitable workplace.’”

The Writers Guild of America, East represents Writers in film, television, news and new media. The Guild also negotiates and administers contracts that protect the creative and economic rights of its Members, conducts programs, seminars and events on issues of interest to Writers and presents Writers’ views to various bodies of government.