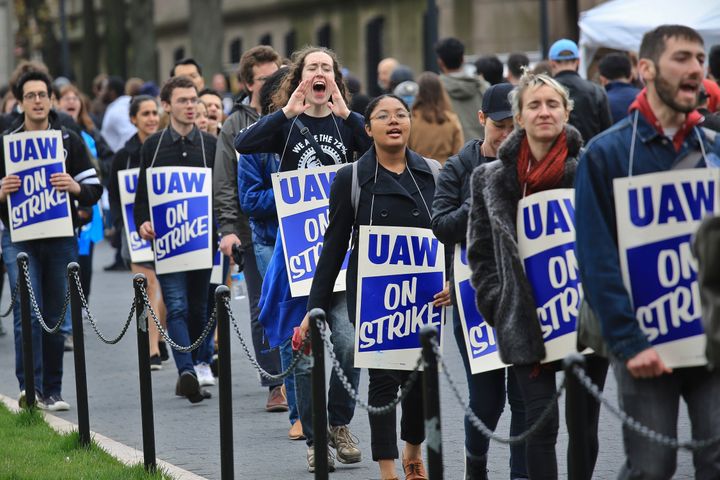 (WASHINGTON, D.C.) - Unions that have been trying to organize Graduate Students at private universities are about to have some cold water thrown on their campaigns.

The Federal Agency that referees Collective Bargaining in the private sector announced it will be issuing a new rule regarding whether such students who teach qualify as Employees eligible to join Unions.  The regulation could have a huge impact on organizing efforts across the country, as more and more Grad Students seek out Union Representation.

However, the National Labor Relations Board (NLRB) did not say what its rule would look like, but now that the Board has a 3-1 Republican majority nominated by President Donald Trump, it’s safe to say Unions aren’t going to like it.

Most of the NLRB’s major new rulings and regulations in the past two years have favored employers over Labor Groups - and made it harder for Unions to grow their ranks.

Jess Issacharoff, a recent graduate of Duke University’s Ph.D. program, isn’t surprised to see a new roadblock likely to go up.  Like many private schools, the Duke Administration has declined to recognize the Grad Student Union there, knowing that the current NLRB Board Members would be unlikely to rule in the Union’s favor if a case made it before them.

“I understand the Trump NLRB ‘is seeking to undermine Worker Power, but the fact is we’re always going to organize to demand better working conditions,’” Issacharoff said. “The question is, ‘are we going to make those demands at the bargaining table or through collective action?’”

It will probably have to be the latter route, at least for now.

If the NLRB says Grad Students are not Employees, then a school would be under no obligation to bargain with them.

The Grad Students could still function as a Union - Issacharoff is a Dues-Paying Member of the Service Employees International Union (SEIU), which is trying to organize Grad Students around the country - but they couldn’t secure a contract unless the school voluntarily worked one out with them.

The NLRB’s Democratic majority in the Obama years actually determined that Grad Students who are paid to teach are Employees, for the simple fact that they perform work and get compensated for it.

But the most hot-button policies under the NLRB tend to get overturned as majorities change.

With schools like Duke and Columbia University fighting the organizing efforts, Unions have been reluctant to get the NLRB involved during Trump’s tenure, for fear the Obama-era precedent would be overturned.

But it looks like the NLRB might effectively do that anyway, not through a specific case, but through the rule-making process.

To Continue Reading This Labor News Story, Go To: www.huffpost.com/entry/trump-is-set-to-deal-a-major-blow-to-grad-student-unions_n_5ce6f20ae4b05c15dea93feb?link_id=0&can_id=296837f367fc5ae5c386dcb443cc6374&source=email-todays-headlines-jobs-with-justice-52419&email_referrer=email_553246&email_subject=todays-headlines-jobs-with-justice-52419&guccounter=1&guce_referrer=aHR0cDovL20uZmFjZWJvb2suY29t&guce_referrer_sig=AQAAAH415mr_VnWS5lb_F4BG2PnFInGASELhiKSxgASIUfs4mG4NNfw9mJRqnh0P9fy_q3y928z4VzacYEnCEGOE_tWeHEJtLTK_ZGyqd6Lltgn1rl-dAU7rGjVZcqwS2T7RuPMoQ7iuW9YDfqQP5xqoX0G9cEqux98tXubM99Kvmz4E&fbclid=IwAR3bnkmD6KOmQqygKdKpwEGoGjtf1XaxcyuHHScU_PUnLbDaasRgoXadZQ0

The 'orange-skinned' billionaire is 'working day and night to set in place every Anti-Union wish promulgated by Corporate America's CEOs!' I'm 'hopeful' the 'War Rooms' of Union Leadership, across the AFL-CIO, are 'aggressively strategizing' more than those War Rooms on the Corporate side. The November 2020 Election 'will determine if' Labor and Democracy will 'remain relevant.' 'No, the sky is not falling' - but a 'whole lot of paid Leadership in both Labor and politics 'had better get their heads out of their asses.' 'Has camaraderie, solidarity and the interacting of Labor Leadership with its Membership 'entered into an era of extinction?' Trump, 'aided by his supporting' Republicans, his corporate - and 'unfortunately, with some Union Supporters as well, will achieve their goals - unless Labor does something.' Posted by Dan Boody on May 30, 2019 at 11:32 am