Published Sunday, May 26, 2019
by Joe Maniscalco/LaborPress.org 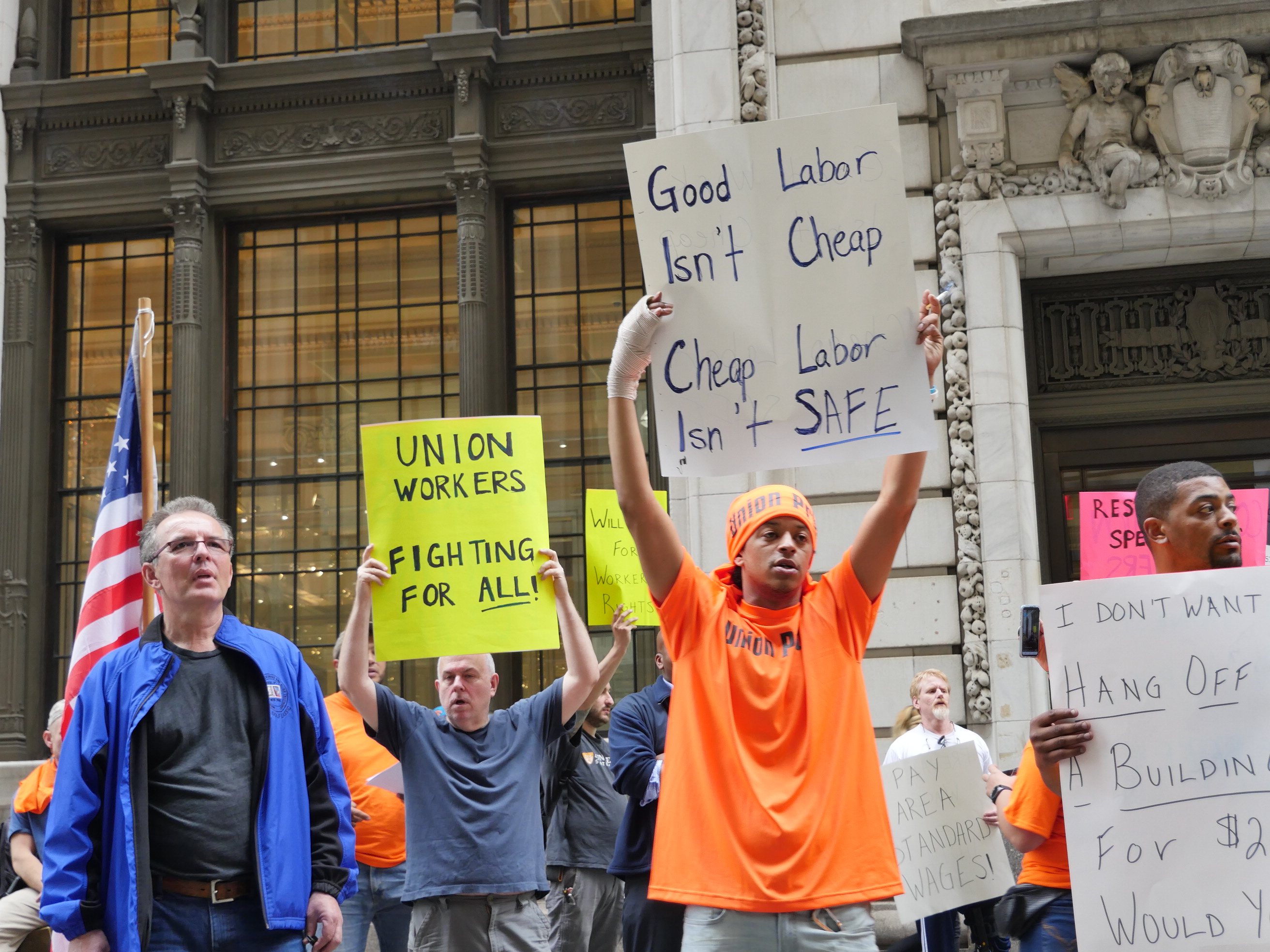 (NEW YORK CITY) - Trade Unionists outraged that the Trump organization is using poorly paid, untrained Workers to restore the facade at 40 Wall Street rallied outside the historic building on Friday (May 24th) afternoon demanding that the current President “act like a responsible owner.”

“This ‘kind of stuff can’t go on - they have to act like a responsible owner,’” Attorney William E. Nagel told Members of Bricklayers and Allied Craftworkers (BAC) Local 1. “It’s ‘they’re responsibility to do that.’  ‘They own a lot of property in this town and they’ve got to make sure they do the right thing by the Organized Trades.’”

Trump, presently facing the increasing possibility of impeachment, bought 40 Wall Street back in 1995.  Since then, according to Bloomberg News, “frauds, thieves, boiler rooms and penny-stock schemers” have come to occupy the space.

Federal Election Commission disclosure forms released a year before the 2016 Presidential Election showed that Trump is carrying a debt for $50 million on 40 Wall Street for the lease on the land.  That may be why inadequately trained Non-Union Workers reportedly making as little as $20-an-hour cutting, patching a replacing stones on the 71-one-story Trump Building facade have been hired to perform the dangerous job.

“It’s ‘only a few dollars more than the Minimum Wage, which is embarrassing,’” BAC organizer Jerry Gozdyra told LaborPress.

Over the past decade, 462 Construction Workers have been killed on the job Statewide - the overwhelming majority of them on Non-Union worksites.

New York City has responded to the outrageous death toll by requiring Construction Workers undergo additional hours of enhanced safety training.  However, that measure passed in 2017, but has yet to be fully enacted.  And, on May 8th, the New York City Council actually voted to extend the deadline for compliance by another six months.

It wasn’t long after that when the city’s building and construction industry suffered yet another fatality with the death of 49-year-old Non-Union Construction Worker who fell 30 feet to his death on a Madison Avenue job site.

Just a month prior, three Non-Union Construction Workers were killed on the job in the span of a single week.

When asked if passersby’s should be worried about their safety walking around the Trump Building at 40 Wall Street, Gozdyra said: “I would!”

According to the BAC, the contractor presently restoring the Trump Building facade has racked up as many as safety violations over the past year - running the gamut from failing to perform adequate safety inspections to employing an unqualified foreman.

To Continue Reading This Labor News Story, Go To: http://laborpress.org/bricklayers-and-allied-craftworkers-challenge-trump-to-be-responsible/