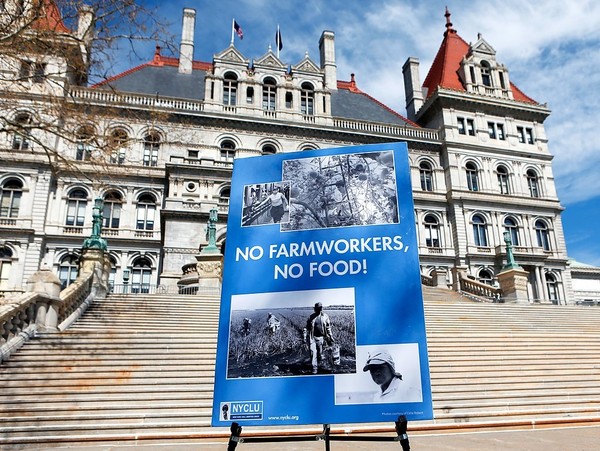 (ALBANY, NEW YORK) – Striking a blow against a law described as a remnant of Jim Crow discrimination, a New York Appellate Court on Thursday (May 24th) overwhelmingly upheld the right of the State’s Farmworkers to prevent Wage Theft and Labor Abuses by forming a Union.

The Empire State’s Labor Laws derived from the 1938 Fair Labor Standards Act (FLSA), which the New York Civil Liberties Union (NYCLU) traces to a drive by Southern Segregationist Lawmakers to deny Black Farmworkers the right to organize.  As a result, the NYCLU said, Farmworkers are excluded from New York’s State Employment Relations Act, sparking a lawsuit against the New York Farm Bureau to spike that carve-out as unconstitutional.

Having initially lost the case at the trial level, the Farmworkers lodged an appeal before New York’s Appellate Division, Third Department, where a 4-1 majority found exclusion violated the State’s protections.

“First and foremost, we find the language of the constitutional provision to be significant,” Justice Christine Clark wrote in the lead opinion.  Clark added that the State Constitution expresses in “no uncertain terms” that Employees have an unqualified “right to organize and to bargain collectively through representatives of their own choosing.”

“This expressly enumerated right - adopted as a result of the Constitutional Convention of 1938 and ratification by the electorate - is enshrined in the New York Bill of Rights, providing strong evidence that the right was regarded as fundamental,” the 10-page opinion continues.

The decision may be influential in a State that relies so heavily on Farmworkers’ labor.

Agriculture brings in more than $6 billion a year in New York, nearly half of it from dairy and livestock product.

New York ranks third nationwide in the value of its dairy farms and ranks in the top 10 states in apples, grapes, corn and maple syrup.

Much of the farm production comes from the Finger Lakes Region.

Rebecca Fuentes, the Lead Organizer with the Workers’ Center of Central New York, applauded the decision: “Farmworkers make essential contributions to New York and to all of our lives.  Their labor produces the food, nutrition, and money that sustain our economy and our communities.”

“This ruling asserts Farmworkers are no longer considered second-class Workers in the eyes of the law,” James wrote in a statement.

Cuomo commended the Appellate Court for protecting the “most vulnerable members of New York’s workforce.”

“From the beginning, we chose not to defend against this lawsuit because Farmworkers never should have been denied the same basic rights as other Workers and we believed this to not only be morally wrong, but also unconstitutional,” the governor said.

To Continue Reading This Labor News Report, Go To: www.courthousenews.com/ny-appeals-court-upholds-farmworkers-right-to-unionize/?fbclid=IwAR0cyjKvMLSX8OQeEzDhikjRaRz7ASxrmjsebaSgSzEpeDoh8BU0KGlXfSA