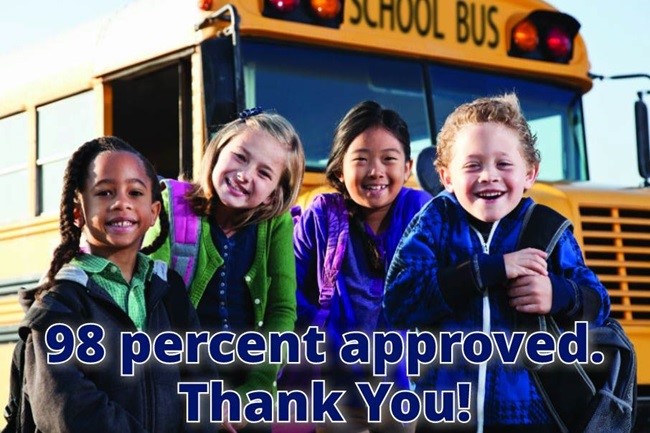 (ACROSS NEW YORK STATE) - Voters across New York displayed their pride in their public schools this week by approving 98% of school budgets, according to a preliminary estimate by the New York State United Teachers (NYSUT).

Voters also elected 29 NYSUT Members to School Board Seats in districts around the State.

“Parents and community members ‘showed their commitment to strong’ public education by resoundingly approving school budgets statewide ‘in near-unanimous fashion yet again’ and electing to school boards Educators ‘dedicated to serving their area’s students,’” NYSUT President Andy Pallotta said. “At a time when resources have been limited, ‘it has never been more important for voters to stay engaged in and support our public school students and their dedicated Teachers.’”

Eighteen school districts sought to override their tax cap in 2019 after the State Property Tax Cap was made permanent earlier this year.  Eight of the 10 budgets defeated this week attempted to override the tax cap.

“While we were ‘disappointed’ the tax cap was made permanent earlier this year, NYSUT will ‘not stop fighting for changes to this law to ensure schools are receiving the resources they need to thrive,’” Pallotta said.

NYSUT’s Local Affiliates also were involved in 229 School Board Races Statewide, with 90% of candidates supported by Local Unions winning election.

Volunteers made roughly 52,000 phone calls this election season in support of candidates and school budget votes, in addition to their e-mail, mail and door-to-door canvassing efforts.

NYSUT represents more than 600,000 Members in Education, Human Services and Health Care and is affiliated with the American Federation of Teachers (AFT), the National Education Association (NEA) and the AFL-CIO.

To Directly Access This Labor News Report, Go To: www.nysut.org/news/2019/may/voters-approve-98-percent-of-school-budgets-statewide