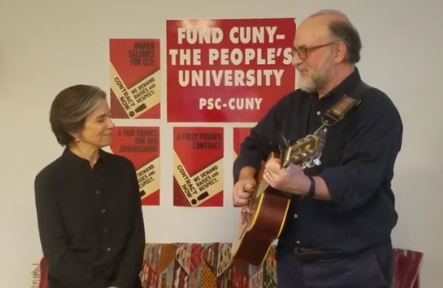 (NEW YORK CITY) - The Professional Staff Congress’s (PSC) media campaign for a fair contract for their 30,000 Members at the City University of New York (CUNY) expanded this week with a radio ad that began airing in New York City on Wednesday (May 15th).

The ad says “Albany and the City should do better - and do right by our kids.”

In other PSC news, PSC First Vice President Andrea Vásquez and Queensborough Community College Union Delegate Wally Rosenthal recently performed a rendition of “A Union Made for CUNY” for their Union's Delegate Assembly.

It’s based on the Labor Song Union Maid by Woody Guthrie.

The PSC has posted a video of a performance of the song that is dedicated to the Faculty and Staff, who are continuing the fight for wage justice and educational justice at CUNY.

At that time, this strong signal of support reflected anger and frustration over being without a contract for almost six years, and without raises since October 2009.

Earlier, more than 5,000 PSC Members signed a public pledge to support a Strike Authorization, and when balloting began, they were joined by thousands more.

The PSC has been in a protracted battle with the City, New York State and CUNY management since its Collective Bargaining Agreement expired in October 2010.

The Union asked for salary increases of 4% for 2010, as well as pay raises for later years to make up for a loss of real wages.

Besides the PSC, there were eight American Federation of State, County & Municipal Employees (AFSCME) District Council 37 Locals and Teamsters Local 237 - representing more than 10,000 Clerical, Technical, Custodial and Security Employees at CUNY - who had been without contracts for more than seven years.

Without their labor, the colleges couldn’t function, yet the majority of the Campus Workers in AFSCME District Council 37 were being paid less than $15 an hour.

To Continue Reading This Labor News Report, Go To: http://sdonline.org/72/cuomo-wall-street-and-class-struggle-at-cuny/.  And For More, Go To: www.psc-cuny.org/